How can January be nearly over already? Wasn't it just New Years the other day? I'm obviously having much too good of a time!
I've been doing a little of this and a little of that. Yesterday was a good example. I read for awhile, sewed on my latest garment, spun some Falklands wool while listening to a podcast, and sewed the buttons on the bands of my Stripey Sweater: 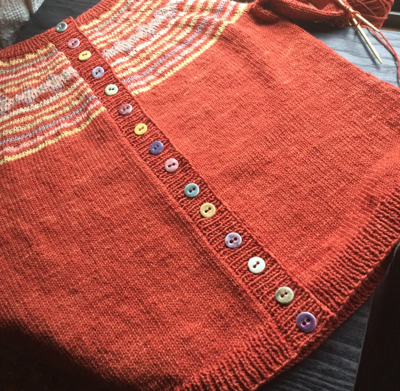 What a perfect way to use those ceramic buttons! They've been in the stash for probably 20 years or more. There's mostly single colours or just a few of any one colour so they never quite worked out for a project. The buttons were made by Esther Grav from Belleville, ON, who is also a weaver and owner of What's Weft. I'm pretty sure she doesn't make them anymore so they're a treasure.
As you can see the sleeves aren't finished yet. I divided the remaining ball of yarn in half and will knit until I run out. The sleeves will probably end up about 3/4 length because I don't think I have enough for longer. Oh well. It's turning out pretty cute anyhow. Of course now I'm madly knitting away trying to outrun the end of the yarn balls! Why do we all think that will work?
Since it was fairly nice out yesterday (not like today's rain) I wandered out to the garden for a visit with the plants. The mache (corn salad) is getting big enough to nibble: 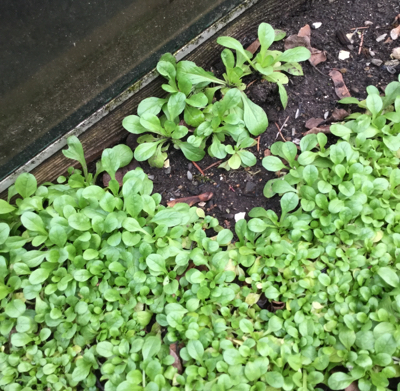 It's kind of tedious to pick and wash but the fresh greens are quite tasty. My garlic is getting taller: 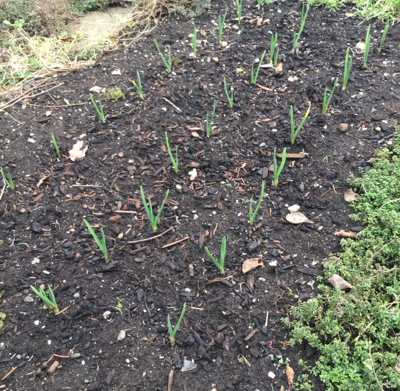 The chives are starting to come up and the kale will soon have delicious buds to pick. I was seriously disappointed in the new kale variety that I planted last year. They are basically little bare sticks. Guess I'll be continuing with my old standby, Rainbow Lacinato from West Coast Seeds. Lesson learned.
This winter has been fairly mild and rainy. We had cool enough temperatures to kill most of the alyssum and the water garden plants but most everything else survived nicely, even my potted recumbent rosemary which has flower buds on it ready to pop. We only had a skiff or two of snow that didn't stick for long, some really foggy mornings and some very pretty hoar frost. Current temps have been around 8-10C - rather nice actually! They don't call our little corner of BC "Lotusland" for nothing. Oh wait - that does have other connotations, doesn't it? Also fairly well deserved. Heh.

So now off to the studio and the sewing machine. Time's a-wastin'!

I really like your use of the multi-colored buttons. Nice work!

ahh, your sweater with those buttons is just gorgeous, Louisa. You are one busy bee. I cannot keep up with you, even on your blog!

Love the buttons!! They're so perfect for that sweater!! And why don't you extend the sleeves with some of the same striping as the yoke??? I, personally, like the 'bracelet' length because I'm always pushing the long ones up. Love the COLOR too. Grins.

love the sweater, the buttons are a perfect finishing touch. I'm ignoring the garden, everything is too wet but it is all popping up without me.