An FO In Red

I finished this little shawlette while we were away but had to wait until we got back to block it. 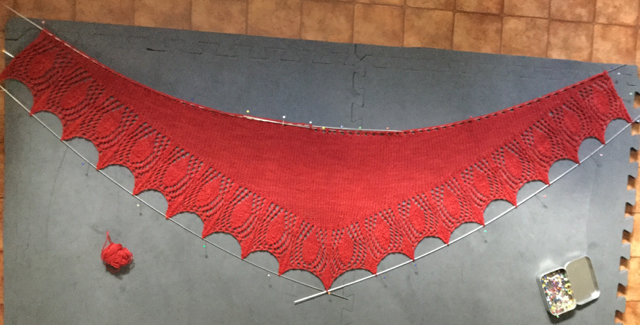 This is a slightly modified Emporté par le vent (Gone With The Wind) by Laurence Mériat, a free pattern on Ravelry. The yarn is the rest of the ball of Raventwist Torc that I used toknit the lace beret. That tiny ball was all I had left and I was several rows short so the last few short rows got truncated. Doesn't really show much anyway. Even though I used a needle two sizes larger to cast on for the lace it still curls a little when I wear it. Note to self: go larger still. This yarn is 100% wool and holds a block pretty well, at least after I removed a bunch of the excess twist from it with the spinning wheel! 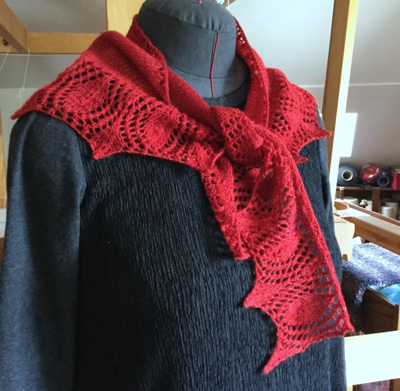 For some reason the chart that came with the pattern and the photo illustrations don't match. The 3 rows of eyelets are reduced to only 2 so several people have recharted it to be more like the picture.  I went with that idea too. 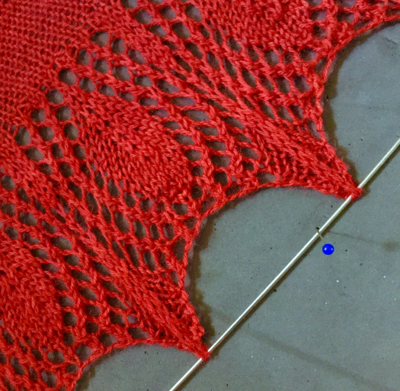 In other news, the slippers are still not quite dry enough to finish up so more on them later. I've been knitting on the one project I have left, my Still Dark Tunic (the Still Light Tunic by Veera Välimäki). For some reason it seems a little looser than I had envisioned but that's probably a good thing for this garment. 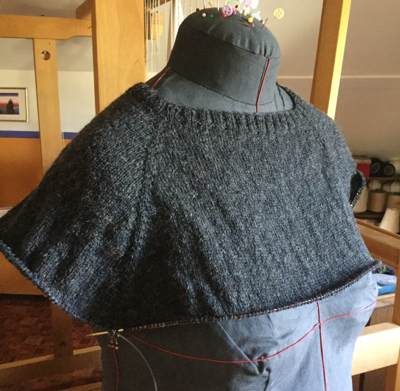 I'm now a few inches past the underarm join and just about to start the increases for the pockets. The yarns are two cones from deep weaving stash used doubled: a Shetland tweed, colour "Macbeth" and a fine worsted , colour "charcoal". The yarns were damaged more than I thought from long storage, at least on the outside of the cones. They broke a number of times on me in the beginning and I got very good at spit-splicing them back together! Totally invisible. Good to use up the stash anyway.
I might have to start something more portable soon. These big yarn cones are hell to drag around! And I always need a small and easy knitting project for when I'm out and about, right? Somehow everything I want to make these days is large and needs me to spin yarn first. What's with that?
I've also started back in on my loom. Yes! Finally after a year and four months I'm attempting to get those annoying summer & winter placemats off. 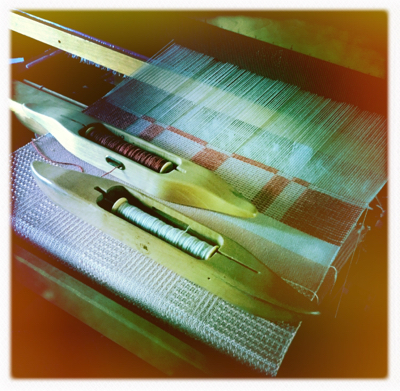 It was hard to remember where I was! The last placemat was left a few inches from the beginning and it was drawing in unacceptably. So I figured since this one was going to be ugly anyway, I got out my temple to bring it out to the correct width. Unfortunately after I finished weaving it there was an error that I could only see from the back! Only one pick wrong so I'll have to needle-weave it back in correctly when this comes off the loom. The next mat is proceeding. I'm making them all different which means thinking too much! That slows me down and I don't get a good rhythm going. I need to persist though because I've signed up for a tea towel exchange with my guild. More on that later.
Moving right along...

Wow, you've been busy!!! Love the RED shawlette - some color in your Grey world, LOL. I think you need a few bright jewels when you have a monochrome wardrobe. I think if I had to do it again I'd go with charcoal or steel grey & invest in a plethora of purple, magenta & cyan tops, bags & shoes. But, I'm 65 next month & will end my days in sweats, Tees, leggings, shorts & handknit socks as I work part-time out of my home office. Hehehehehe

Yes, it is a lovely shade of red, isn't it? And it goes perfectly with all my grey. Gee you're a half a year younger than me, Sharon! Welcome to the ranks of the fabulous seniors. As Thom always says, it's better than the alternative!