Update to the Update: Fooled you! We decided that we would go back to the gas station and use the wifi again before leaving Winchester, ID. We're definitely on the home stretch. Only two more long drives before we get home! Meanwhile, we go back in time several days...
September 25 - Yellowstone National Park, Wyoming, Madison campground, Day 1.
Today is Thom's birthday, number 66! Hopefully an auspicious year. I won't catch up to him until November. But that's just fine - I can wait.
We got started at our usual early hour but the fog was pretty intense over the rivers and some of the fields where it was especially damp. We nearly ran into several herds of whitetail deer by the side of the road. They get so confused as to which way they're going, no wonder so many become "road pizza". We also saw our first non-road-pizza skunk scurrying beside the road on the way out of the Medicine Lodge campground. No smell!
We travelled across a large chunk of Wyoming, through Cody, home of the original Buffalo Bill, and through the very scenic Shoshone Canyon. The trip through Yellowstone's East Gate and the high Sylvan Pass was clear and sunny. It was pretty cool up there though. We headed to Madison by way of Canyon so we could visit the Dragon's Mouth: 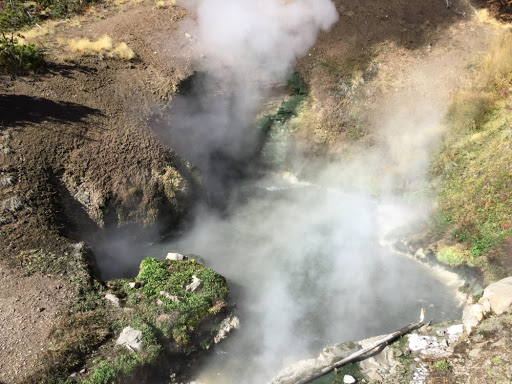 I wish you could hear it roar! And see the tongue of water lapping out at each steamy breath.
We also stopped at Yellowstone Canyon itself at Painter's Point to see the falls: 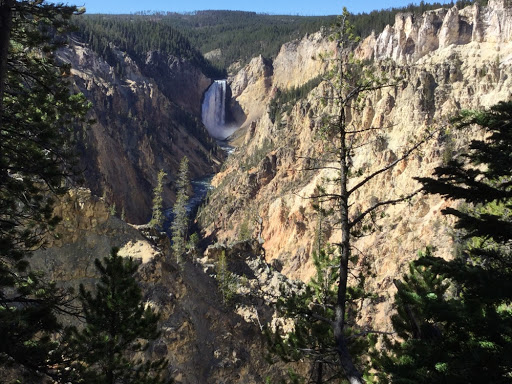 So beautiful! And so busy with people all getting in each other's way to photograph the gorgeous scenery. After that it was off west to Madison campground which was to be our base for the next 3 days. We were lucky we had made reservations from Badlands because it was posted full for the whole time we were there. We didn't go too far that evening, only down to the confluence of the Firehole and Madison rivers near the campground where we saw some elk relaxing across the river: 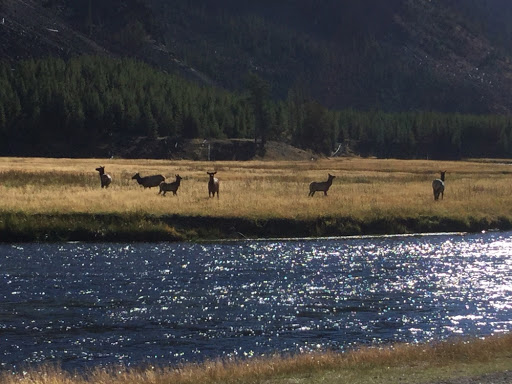 We nearly always see some elk in this meadow every time we come to Yellowstone.
September 26 - Yellowstone NP, WY, Madison campground, Day 2.
This morning was really chilly, only 4 or 5C in the van! We were warm enough in bed but luckily we had our propane heater handy. We used it to warm us up enough to get up and dressed and have breakfast before we headed down to Old Faithful to walk the boardwalks and watch geysers. After all, that's what we're here for! The weather heated up pretty quickly in the sunshine and soon became a rather hot day.
This is Daisy. For once she went off right when we got there and was early so nobody else was there but us: 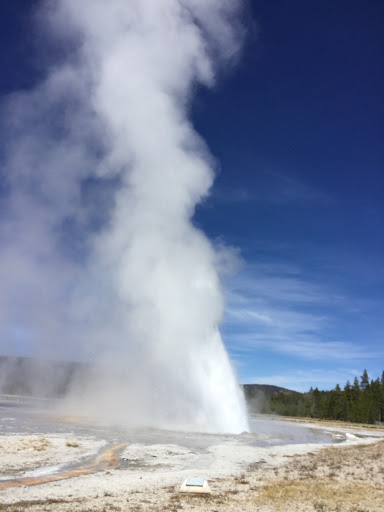 She only goes off twice a day within a fairly large window of several hours so sometime you have to wait for quite awhile. We usually manage to miss her because she's quite far away from most other thermal features in the area. We also watched my favourite Anemone go through her tricks. Here she is aquiescent: 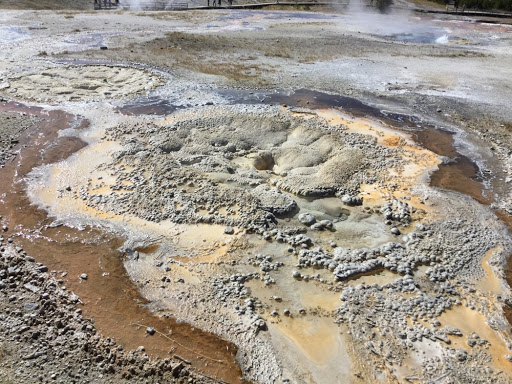 There's two vents that play off each other in varying order and at the end each goes "down the drain" with a sucking sound. It stays quiet for 7-10 minutes and then starts up again. Very fun to watch and try to predict which vent is going to act first. The main front vent can blow as high as 5 feet for several minutes. It's even pretty when it's not doing anything at all!
Another favourite is Sawmill. It performs more often than it's quiet. It sounds like a mill - whomp-whomp-whomp - and spirals up from the centre: 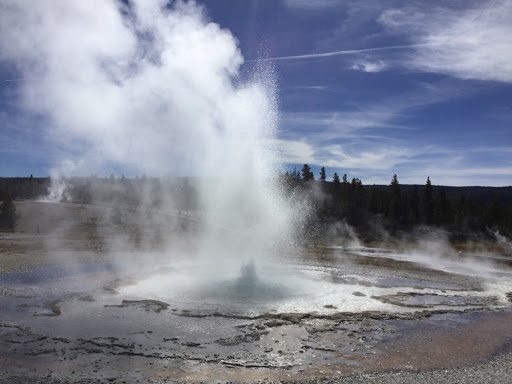 The water droplets were sparkling and of course I got my usual "geyser kisses" from him! Not too hot this time, thank goodness.
On the way back to camp we saw a number of bison herds. This one was all relaxing very close to the road: 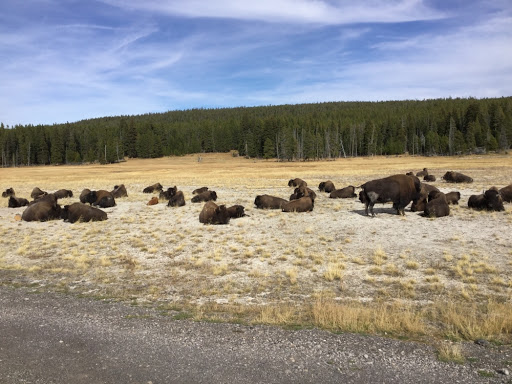 September 27 - Yellowstone NP, WY, Day 3.
This morning was slightly warmer than yesterday morning but we still used our heater to get us up and going. There was definitely frost on the picnic tables! Luckily it warms up a lot later in the morning but the cooler air means that the thermal features get rather steamy: 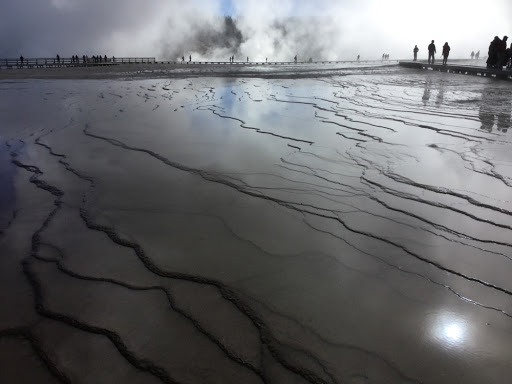 This was up by Grand Prismatic Spring, a view of the extensive bacterial mats. You couldn't really see much of Grand Prismatic for the steam and the hordes of people photographing everything in sight. I settled for the edge of it and its orange mats: 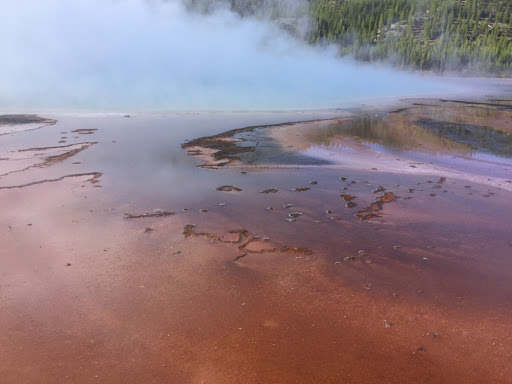 Under that steam the colour is a rich turquoise! The only way to really view this spring is from the air  though. It's just so huge, the biggest spring in the park.   Next we went to Old Faithful again and watched it go off from a distance while standing in front of Anemone: 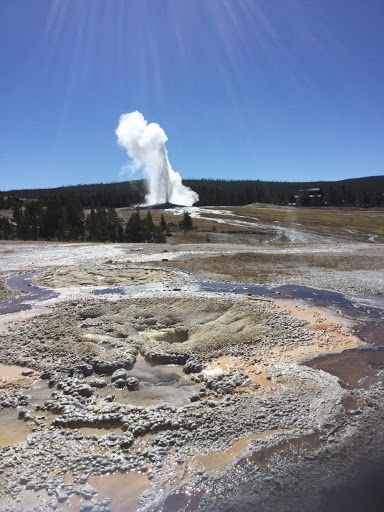 Then we toddled over to Grand Geyser, early because we missed it yesterday. Of course today it was not only late but outside it's window. We ended up sitting there for 3.5 hours chatting to our neighbours and hoping each time Turban went off (every 20 minutes) that Grand would go too. Finally it decided to go and it was really spectacular: 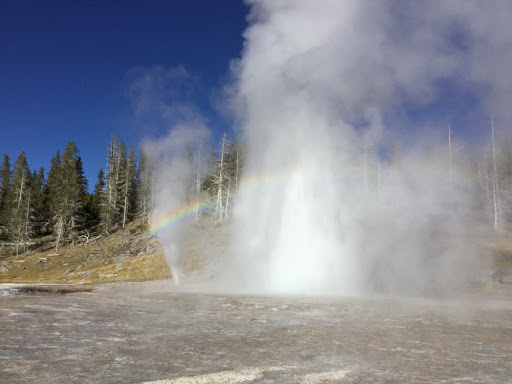 Note the rainbow! This geyser is actually 3 in one, Grand, Turban and the Vent on the left there. The show went on for quite awhile too and we were glad we hadn't given up and left prematurely. After all, once you've wasted a couple of hours sitting and waiting you might as well go all the way, right?
We had a lovely time geyser gazing! But tomorrow we're off again.
September 28 - Lewis & Clark Caverns State Park, Montana.
We had only a relatively short hop today. We travelled north and a little west through farmland and sagebrush country. There was a very long section of roadwork near Quake Lake where we had to wait and wait for a pilot car to follow for several miles through the pass. The weather remained sunny which was lovely. We've been to Lewis & Clark Caverns a number of times so we didn't go up to the cave tour this time. Instead we rested and read books and had a hot shower (the first in what felt like forever!) and generally lazed about in the warmth.   September 29 - Winchester State Park, Idaho.
We got up to a lovely sunrise this morning: 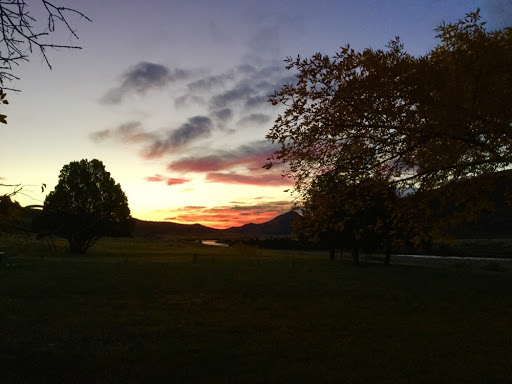 Unlike yesterday, today was a very long drive. A large section of it was very scenic though. We went west of Missoula and through the Bitterroot Mountains on a winding road that went up over Lolo Pass and followed several rivers. Then we went around south and then north again over another pass to the Camas Prairie. Our campground is on a lake very close to the sleepy little town of Winchester. We walked the trail that goes nearly, but not quite, all around the lake. In winter it's a cross-country ski trail so it's quite wide and relatively flat. The lake as a number of "arms" so it was about a 6.5K walk and we were the only people on the trail. Everyone else we could see was fishing from one of the many docks. The lake is full of migrating Canada geese. These ones were marching past our campsite: 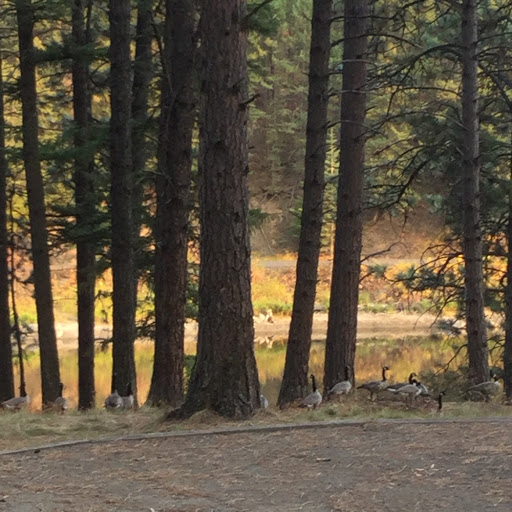 So cute! But noisy. Aside from the geese it's pretty quiet here because they are closing the campground in a couple of days. Good thing we're nearly home before we run out of camping options, huh? Not to mention good weather. Oops, should I have mentioned that?

I don't mind if you keep traveling for a few more weeks, I'm enjoying the travelogue.