It's been a lot warmer and raining on and off for the last few days. The snow is only half as high but it's still not easy crossing the side streets through the slippery slush. We've pretty much decided to skip running away anywhere. Sniff! By the time the mountain passes are clear I'll be in Seedling Mommy mode and won't be able to leave my baby plants alone. Oh well. The last two years of running down to the Oregon Coast in February were kind of abnormal anyway. C'est la vie.

I have a FO for you. I finally finished the Indigo Skyp Socks (aka Smurf Socks):

These things gave me such a hard time! The pattern is by Adrienne Ku and it should have been as simple as she says. But somehow I kept making mistake after mistake. I even ended up finally with one of them 2 rows shorter than the other! Grrrr...I really should get a shot of them on my feet since that's the way they look best. Next time I put them on, promise. Interestingly even though the Japanese indigo-dyed yarn crocked off on my hands when I was knitting with it, the finished socks didn't release all that much blue into the wash water. However the bathroom sink had a blue ring around it when I was done! (It came off easily with a little Vim.) I'm going to have to be a little careful what I wear these with and what I wash them with for the next while until they finally give up all their unfixed indigo.

I've knitted some on the Licorice Tunic back: 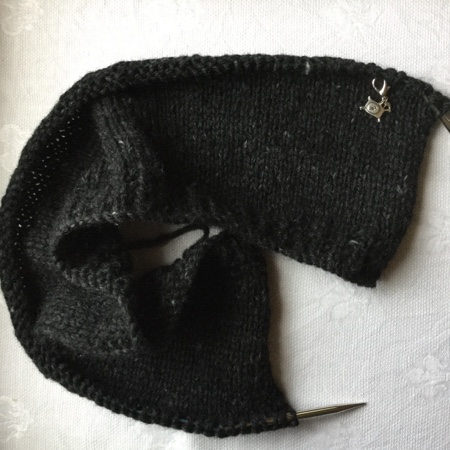 Like my little progress marker? I borrowed the idea from an Instagram post by my friend @fibre.art.studio. (She had Kevin the Minion!) I had 2 of these petroglyph bighorn sheep and 2 lobster clasps so I made 2 markers. I've knit further since this photo and I'm nearly out of the first ball of yarn. Better get spinning more - it's a fast knit at this gauge! Which BTW is pretty darn perfect despite my concerns about being able to spin thick yarn. Whew.

Speaking of gauge, I've also knit a couple of gauge swatches for the Isabel cardigan I'm making next in the Cloudborn Highland Fingering yarn. It's slightly finer and less dense than sock yarn and at the recommended gauge with the size 3.5mm needles it was too loose and sleazy. I went down a size to 3.25mm and like the resulting fabric much better. It's 26 stitches and 36 rows to 4" now though instead of 25 stitches and 34 rows. But I think it will be OK anyway since it's light and stretchy and the sweater is a waterfall style with lots of overlap. The width would only be less than an inch narrower across the back which will probably fit me better anyway. As long as the armhole depth is adequate the rest of the row gauge issue can be solved by just knitting to measurements. Easy peasy.

Speaking of measurements, I will have to adjust the sleeve length. Massively! They are very long as written and would cover my hands with room to spare. I need to take at least 4" off leaving them still a couple of inches past my wrist bone. Yeah, little old T-Rex Arms here! Obviously Isabel's designer, Amy Miller, was going for a fashionable elongated sleeve for a person with normal arm length. Normal is usually about 2" longer than my arms which are only 16" from underarm to wrist. Adjustments are normal in my world. It's so nice to be able to have clothes that don't make me feel like I'm wearing hand-me-downs from my big sister! (And I don't even have a big sister because I'm the oldest. So there. Pfth!)

Lastly, I have an outfit photo for you today. I was spending some time on Pinterest looking at past seasons of a Swedish designer whose garments can be very inspiring and colourful, Gudrun Sjödén. Can you tell that some of her style rubbed off?

A revelation. I didn't even know that my rayon batik shirt actually fits over my brown dress! I already knew the colours play nicely because I often wear the shirt with the pants I made from leftovers from the dress. And of course since it's still pretty cold I added my very springlike Cherry Leaf Shawl (which is so old it predates Ravelry) in a brighter colour than I usually wear. Everything is me-made except the olive leggings which are at least 15 years old. I quite like this combo though if it was warmer I'd wear one of my cotton scarves. The cashmere is very toasty!

Off to spin for an hour or so before I have to get supper ready. I have half a bobbin of singles to fill.

And what's the matter with a little early Spring Green in a winter outfit???? Older adults NEED a little bright color in the dead of winter! So there. Gawd, I am sooooo glad to see the end of all this snow!!

Nothing is wrong with my scarf! I love it lots. It's just that it can be too warm especially indoors. Hint: cashmere. 😻