Instead of all the crazy goings on (about which we will not speak) we have another option - celebrating the halfway point between winter and spring. Known variously as Imbolc (pronounced "im-olk" and meaning "ewe's milk"), St. Brigid's Day, Candlemas, or Groundhog Day, we in the Northern Hemisphere are starting to feel hints of the rebirth of the earth. As I've mentioned before on this blog, here in Vancouver we've had a particularly icy winter (for us anyway!) and it's lovely to see the sun out as it has been for the last few days.

There are buds showing: 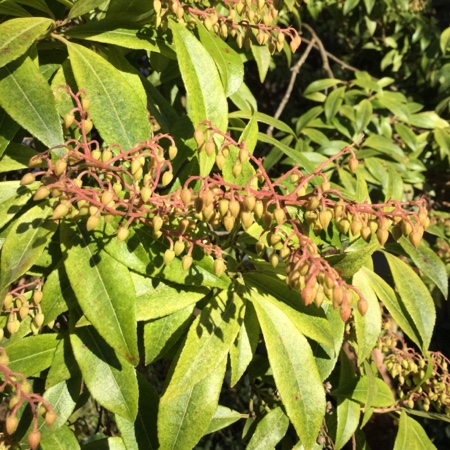 Pieris japonica. Ours are not small shrubs but near-trees! 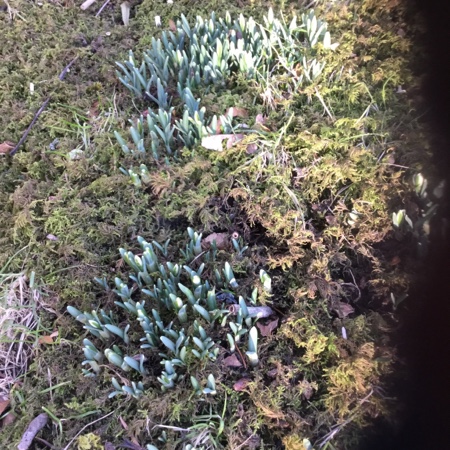 Our snowdrops aren't quite out yet, though some of the larger variety down the block are. These are on the north side of the garage and were under a foot of snow not that long ago. 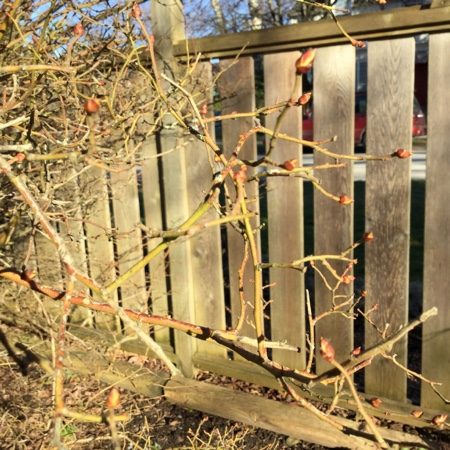 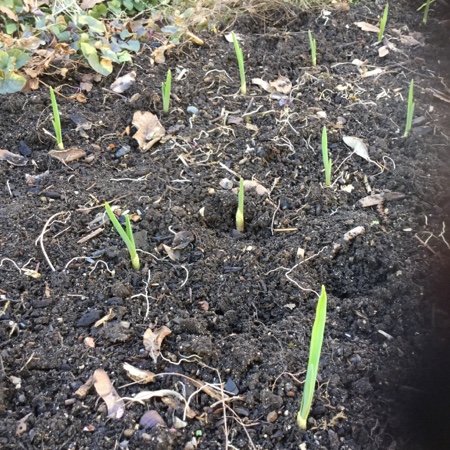 My garlic coming up. There's footprints in this bed. Probably the raccoon who has been making early morning visits to the water garden on the upper deck. He or she had better leave my plants alone! 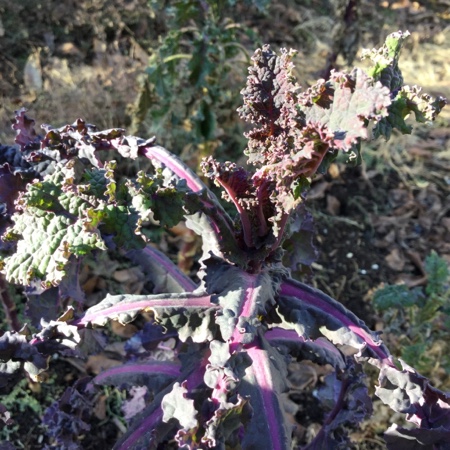 The overwintered kale is starting to grow again. Hopefully there will be kale buds to pick soon. Yum. We took Thom's mom out to Mandeville Gardens cafe for lunch yesterday and I picked up nearly all of the seeds that I need to replenish my supply. Though I won't start planting anything until sometime in March. Then I'll be back to coddling all the little baby seedlings again. So much work but I kind of look forward to it. I plan to pay more attention to the garden this year.

Also, did you see the beautiful celestial triumvirate in the evening sky? The waxing crescent moon's smile, large and shiny Venus and small red Mars in close visual proximity. So nice that the sky has been clear for us for once. We usually miss all the good sky stuff due to clouds. I tried to take a photo but my iPad camera is not equipped to deal with a dark sky. Its convenience usually overrides its limitations.

So how is the crafty stuff going? S L O W L Y . I have one skein finished of the Licorice Allsorts bulky yarn but it turned out not quite as bulky as it should be. I'm hanging on to it for parts of the sweater where it shouldn't make a difference such as pocket edging or perhaps the collar. I'm sure it will get used somewhere. I'm not planning on wasting 126 yards of precious handspun yarn! The second bobbin is nearly full so I'm hoping it will be closer to the ideal yarn. I always have difficulty spinning thick yarns. Fine yarn for lace, no problem. Anything heavier than a DK is problematic unless I feel like making it with many multiple plies. And that's a lot more spinning. Three plies combined into 900+ yards total is plenty much for this project I think.

I've also made some serious knitting time for the Smurf Socks. They are past the heel turn and onto the foot now: 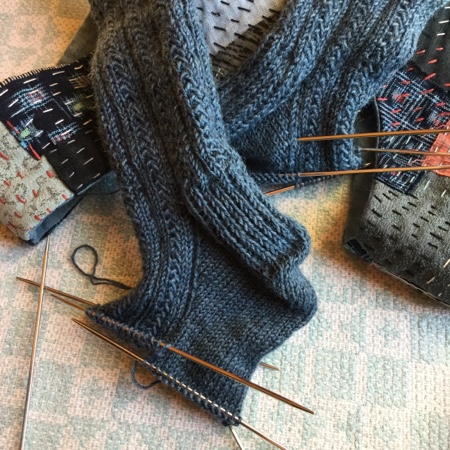 Home stretch and easier because only half the round is patterned. Still turning my fingers blue! I'm going to have to do some remedial scouring on these things when I'm finished knitting them. Don't want blue feet! Luckily I nearly always wear black cotton under-socks between my skin and my handknit wool socks. I'm not allergic to wool but I have a skin issue that means I need to moisturise my feet (and other parts of my anatomy) heavily at least twice a day. I don't want shea-buttered wool socks! It's much easier to wash the cotton socks more frequently. The skin issue has never been properly identified or treated but we will not discuss the inadequacies of the medical system right now. At least I've found the best way to deal with it and it's all natural and benign - my own blend of shea butter, calendula oil, lavender and vitamin E. So there, doc!

Ahem. I digress. I still haven't gotten back into sewing yet. Perhaps the huge piles of wool on my cutting table and the plethora of black dust buffaloes roaming around my studio are having the effect of keeping the fabrics hiding in their boxes? I feel like I should finish up the wool processing at least before I clean thoroughly in there. The spinning part is in the opposite room, my study, and yes there are dust buffaloes in there too. I actually think they are bigger! Definitely more aggressive. But if I can keep them contained in the study then I can contemplate bringing fabrics out again in the studio. Three more Licorice Allsorts bundles to go.

Speaking of sewing, if you are a fan of Stitcher's Guild, you will know that poor Dragon Lady has been having serious issues with hackers and spammers and the main site has been closed on and off for a month. I don't really post on there or on the alternative popular site, Pattern Review, but I do use them somewhat. I haven't felt that either interface was comfortable for me so I haven't embraced them as fully as I could have. On the other hand, I love Ravelry for knitting, spinning, crochet and even weaving but there hasn't been anything comparable for sewing. Well, I've found something that may - if enough fabric folks will embrace it - become something similar to what Ravelry is. Perhaps not on the same massive international scale. But there is potential. It's called Textillia. I'm still very new to the site but what I especially like about it is the ability to save your own projects, patterns, queue, fabrics etc and to add them to the database. There is a forum for discussion and, hopefully coming soon, groups. There's even areas for dyeing and surface design, sadly unused as yet but the welcome mat is out! I'm not huge on chatting but so far it seems welcoming and easy to post to, including photos for help and feedback. So far the site is still in beta and is free to join though the owners say they will eventually go to a very reasonably priced subscription format. A bunch of the SG folks are over there already. Go join and get involved! I'm sure I'll be mentioning Textillia again in future posts. I rather want it to succeed.

Obviously I've been saving up my babbling for another week. If you only knew how many posts I write only in my head. Heh. Wishing you all a Happy Lunar New Year in this year of the Fire Rooster! Hmmm...why did the chicken cross the road...

Yeah, I got surprised by the calendar myself, this morning!! January crept away without a sound, unless you count all the Chinese New Year celebrations that welcomed in the Year of the Rooster . . . . I think the whole country should adopt Chinese New Year instead of January 01!!!!