When Life Gives You Snow... 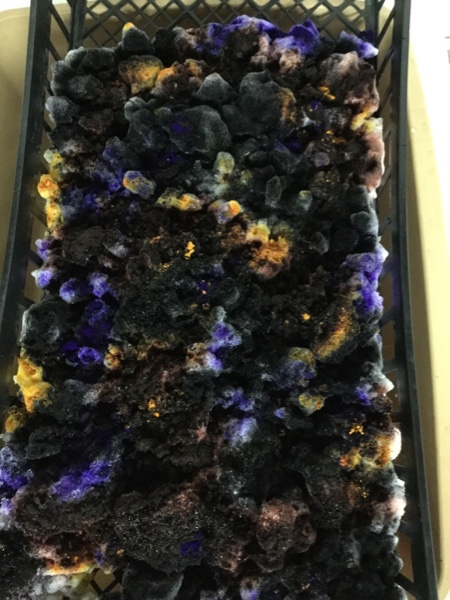 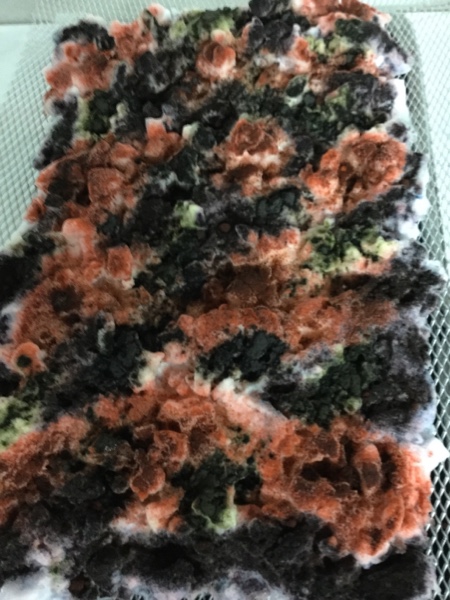 This time I'm trying acid dyes on wool. The top one is 100g of sock yarn and the bottom is just under 150g of Corriedale sliver (or skinny roving). The dyes are mostly very very old from the depths of my stash. 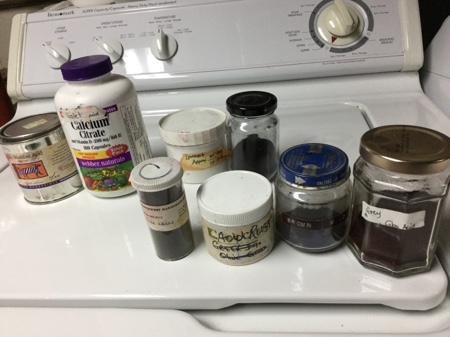 One doesn't even have a label but I think it's black? You can't always tell by the powder colour. I'm always afraid to use them in case they aren't any good anymore but this time I just decided to go for it. I spread them thickly to hopefully offset any depletion in strength. (The gold yellow from Maiwa on the left is the only newer dye I used.) If it doesn't turn out so nice, I can always overdye, right?

Unlike the Procion dyes on cellulose fibres which just need final rinsing, the wool will need to be steamed in the craft microwave after the snow melts to set the dyes properly. Results TBA! I may be tempted to try some more snow dyeing before the week is out. There's at least a foot of snow out there to play with, although the underneath layers have melted and refrozen into ice. That works too - if I can get it broken up into small enough chunks. I am attempting to enjoy this crazy weather we've been having and trying to remember that it's normal for most of the rest of Canada and a goodly chunk of the US too. Real Winter! Who'd a thunk?

In other news I finally finished carding all the Licorice Allsorts wool and spent at least a half an hour vacuuming up all the thundering dust buffaloes everywhere. I also cleaned the drum carder thoroughly but it's going to need to card some wool that doesn't mind getting a few black fibres in it next. No white stuff that wishes to remain pristine! That was over a kilo of black processed and it can't help but leave a few remains behind. Next project: finish spinning up enough bulky yarn for my Ebony sweater.

Under the heading of "personal style" I came up with this combo:

These are all older garments and the only non-me-mades there are the brown turtleneck and fleece tights. The sweater is crocheted instead of knit with tweed wool from my weaving stash. If I was wearing this outdoors I would substitute boots for the Birkies. (And a warm coat!) I haven't worn that bubble skirt for ages and remembered that I quite like it. But it needs the elastic waistband taken in just a little. It sits nicely without riding up (as it would if it was too tight) but it feels just a little precarious on my hips. Don't want a clothing malfunction, do we? Of course it would help if those tights had a higher rise on the waist. They're even more precarious than the skirt! Why do current manufacturers think women want tights/leggings/pants that barely pull up to the hipbones? Or is that just me? When I sew my own I usually make them come up as high as my belly button. Much more smooth and comfortable and eliminates the muffin-top look.

Well, off to slog in the snow and ice to pick up a few groceries. It's actually quite nice out there right now but there may be more snow coming tonight. I have to admit it's pretty and brighter than our usual rainy February. However, any plans for running away in the Westie for a few weeks are looking a little off-putting right now. Whatevs. We always have alternative amusements. Right?

I only just realized I missed your last couple of blog reports!! I DO like that Reddish Rusty Winey Sweater. And I'm damned if I'll be outside in a foot'na'half of snow messing with dyes & wool!! I really, really have to get that big bobbin wound off my Indian Spinner before summer. I still want to make that Kimono style sweater before I dye with it.
I hope the Weather Beasts are correct & we get rain on Wednesday!!!!! We should be dusting off our shorts in a couple of weeks, not looking at bloody snowflakes. Good thing I don't have to commute anywhere these days, that's all I have to say.

The dyeing all happens in my basement. I didn't even have to go outside! Thom just brought me a bucket of snow while he was shovelling the walk. Again. Spinning is a great occupation in this weather. It's so bright I can even see to spin the black wool!