Hello, my dears! I hope you are enjoying some signs of spring wherever you are. Unless of course you live in the Southern Hemisphere - does anyone read my blog from there? Shout out if you do! Anyway, there are (finally!) plenty of spring-like things going on around here. I've been planting seeds in flats in the Grow-Op: 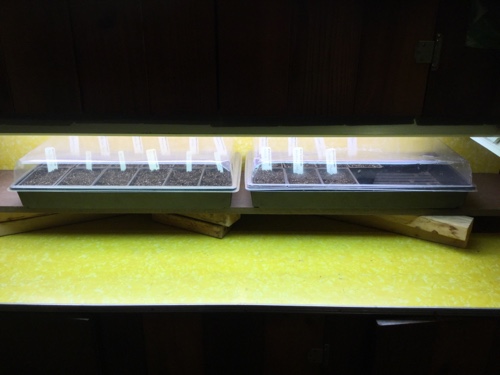 This photo was taken several days ago and there are already little green shoots poking up and more flats planted. Soon I'll have to transplant my early Asian greens into bigger digs and put them out in the greenhouse during the day until their garden beds are ready. They don't much like the heat under the lights. I was out there mucking about already and managed to get the peas in a week earlier than last year. Yay me! I also cleaned up, dug and manured the dye garden. The asparagus and rhubarb got fertilized also. Lots more work left to do still though! This is the most intense time of the year for the garden.

Speaking of rhubarb, I finally used some of my precious dried rhubarb roots: 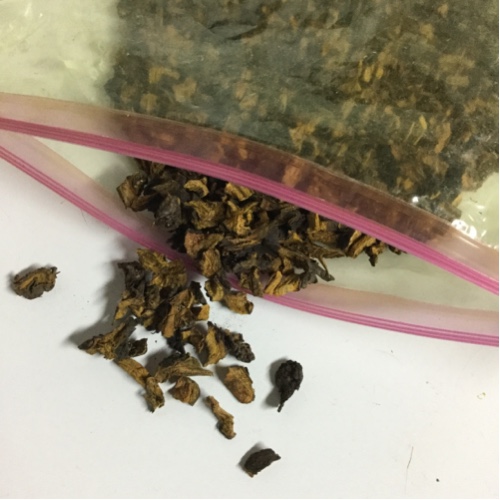 Notice how the ziploc baggie is turning yellow! This stuff is potent and even likes to stain plastic. Not so useful on cellulose fibres however judging by the cotton ties on my skeins. So what did I dye? I got my last order of Cloudborn yarn from Craftsy! And immediately decided that I needed to dye 3 of the 4 skeins of Oatmeal Heather: 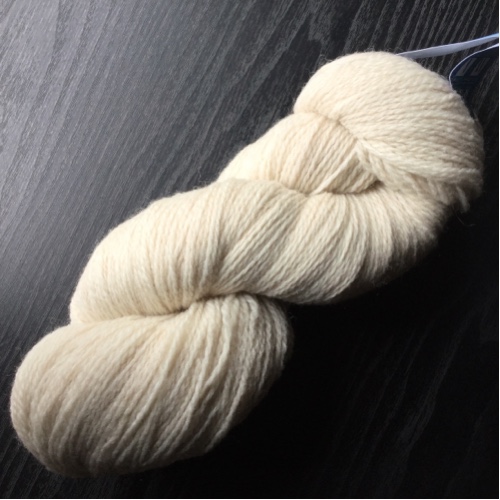 This is a lovely creamy near-white but I'm really craving a yellow sweater. 3 skeins equal just under 1500 yards in total and I have an idea on the pattern which only should take around 1300. I used 150g of the rhubarb root (50% WOF) and did a triple extraction for the dyebath. That means that I soaked the roots in hot water for about an hour, strained the plant matter out and dumped the juice in the dyepot and then repeated this sequence three times. They don't need much heat or it will bring out more gold tones so I kept everything below even a simmer, just barely steaming.

Then, since it doesn't really need a mordant for yellow, I just soaked the skeins while I was extracting and popped them right in when the pot was ready. I went down to the dye studio several times to turn the skeins and heat the pot again briefly and then finally left the pot to sit overnight. And we have yellow: 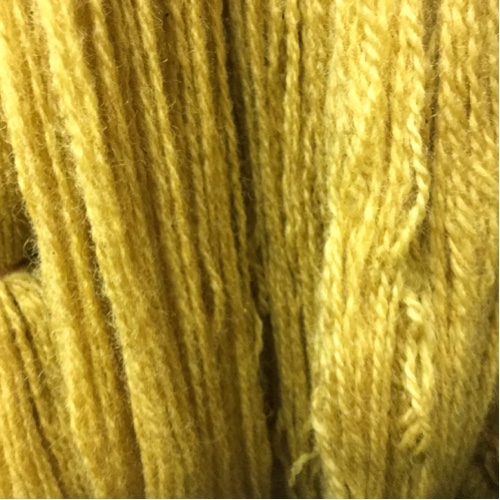 I had a heck of a time getting a true colour photo. This one is close but these skeins are still damp and also haven't had the excess dye rinsed off yet. I'm heeding the advice of Kathy Hattori (of Botanical Colors) to not rinse the fibre until it has dried bone dry first. She says it makes for deeper more fast colours. OK, I'm game to try. Though the yarn needs a tray underneath because no matter how well I squeeze it out it drips a lot! Now I know why people dye outdoors.

This morning there was still quite a lot of dye left in the pot so I decided to also sacrifice one of my white Cloudborn merino/nylon sock yarn skeins to the dye gods. It came out a little deeper than the first yarn and more golden in tone. Superwash wool yarn is a dye sponge! The little bit of regular wool thrums I threw in was quite a lot lighter, more of a lemon yellow. I haven't taken a photo of these yet.

Rhubarb root is really versatile and you can get a whole range of colours depending on pH and other modifiers. Apparently Alum mordant gives more of a gold, iron modifier will turn it green and copper modifier gives tan. I decided to scoop out a bit of the dye liquor and try adding soda ash to turn it pink. Wow. Did it ever! 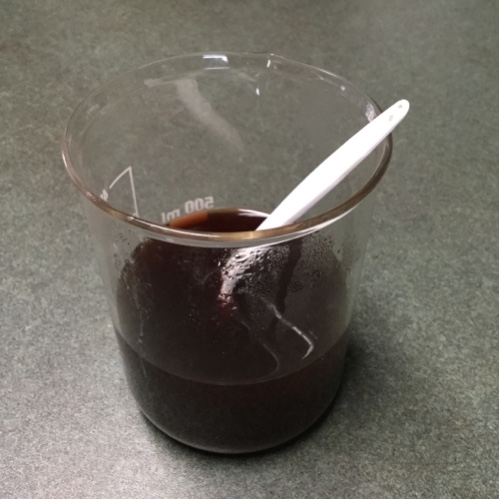 I only dyed another little wool thrum bundle in this very alkaline bath: 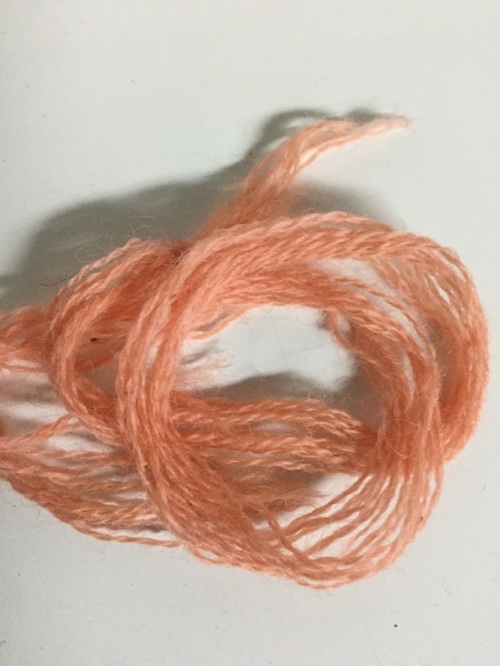 So not yellow! You definitely don't want to heat this bath too hot or the high pH will damage the wool. I rinsed it rather quickly after only giving it an hour or so in the dye. Definitely possibilities here if you (unlike me) are fond of pinks. The true colour is actually a little less peachy than the photo.

That was fun. Now I still have a little bit of colour in the dyepot but I've exhausted all the fibres that I wanted to dye. So I guess it's going bye-bye. I still have plenty of roots left and now I'm wishing I'd divided my rhubarb again this year. It probably needs it too but it's a bit late now so I'll wait until earlier next spring. It's a big job! I have 4 or 5 plants now and nowhere to put any more of them so splitting would be more for the roots for dye and refreshing the clumps than to propagate new plants.

Well, I have more news too but I'll save it all for next time.