Yes, I Made A Garment In Quilting Cotton. So There.

Well hello! The weather has been quite lovely for the last few days and I’ve either been out or in the studio feeling as if I should be out. Quickly, enjoy it thoroughly before Glorious Spring escapes!

Oh yes, in the studio - or, as I’ve begun to refer to it, “The Atelier” (snort!) - I’ve been working hard and finished the first of that nearly-endless pile of sewing. Behold, the Batik Alder Shirtdress: 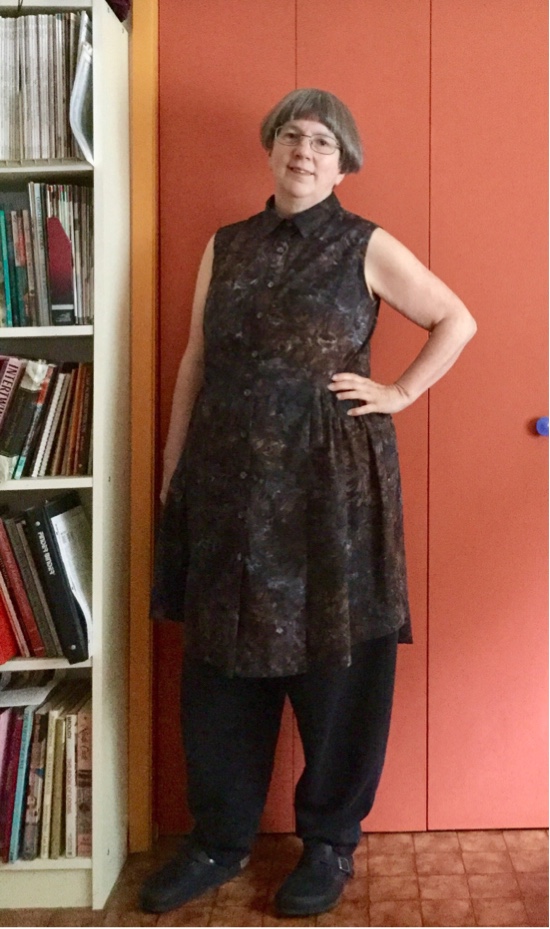 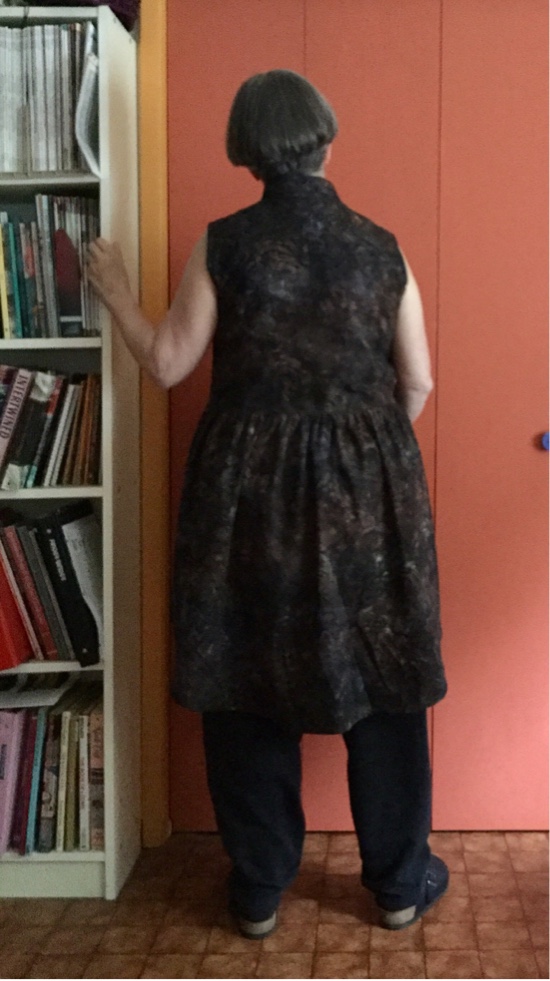 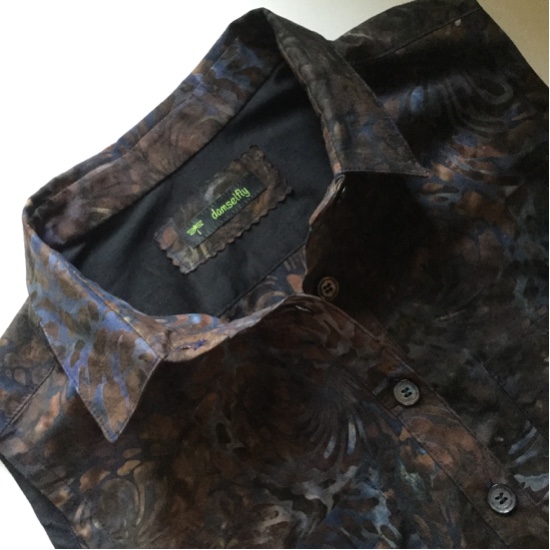 You will note that this wasn’t even in the photo list I posted at the end of March but the pattern was one of those that I pasted together and did the fitting changes on so somehow it jumped to the head of the queue. I apologise for the lack of clarity in the modeled photos. I wanted to git ‘er done! And of course the light was fading and I was tired and blah-blah-blah. I kind of love my baggy Clown Pants underneath though! Heh. The detail pic shows the fabric better and the small piece of black sateen (left after underlining my Marcy Skirt) that I used for the inner yoke and the armhole binding. I got a bit creative with my label too. You might have noticed that I’m rather fond of batik fabrics and this one is a little less stiff than some of the quilting cottons out there so I thought it was quite suitable for a shirt. I got it a couple of years ago at the sewing show in Puyallup and just hadn’t found out what it wanted to be until this pattern. Dark grey, brown and dusky blue go perfectly with a lot of my wardrobe colours.

The pattern, Grainline’s Alder Shirtdress, is the first one I’ve used from this company. Interestingly, I had to widen the shoulders quite a lot for coverage. I usually have to narrow them instead. Along with raising the underarms, I had to figure out how to alter the pattern to slope the shoulders. (I discussed this in a previous post.) Both are usual adjustments but for once I didn’t have to lower the bust dart. Go figure. I probably could have used a small FBA though because there’s not quite enough room to wear a T-shirt underneath even though I graded out from a 14 to an 18 (the largest size) on the bodice. Conversely there’s a little too much fabric in the upper chest area, likely thanks to increasing age and non-ideal posture. Not quite sure how to fix that but I think the dress still fits pretty well in this version. I will likely make another if this one gets worn enough. In a very different fabric and not right away however.

Moving on to cutting out some more fabric! The pile doesn’t seem to be getting any smaller somehow. Even though I controlled myself quite carefully when I went to Dressew the other day and mostly followed my list. I was after a zipper and a lot more thread plus an alternative fabric to coordinate with my Maiwa checked khadi cloth. The original choice was a rather lightweight and stretchy black knit but I thought it was too likely to stretch out of shape as the top section of the planned dress (V8975) when combined with the weight of the khadi skirt. The handspun and handwoven fabric is actually fairly light but the skirt folds and pockets are the usual Marcy-esque voluminous. So instead I found a 100% cotton (no spandex) jersey that’s heavier and has very little vertical stretch and only a modest amount of horizontal stretch. It’s also not quite black but a really dark almost-black charcoal grey labeled “Raven” on the bolt. I think it will work much better for my vision. We’ll see when we get there.

However, speaking of light and stretchy, the one thing I really was unable to resist at Dressew was the last 2.5m of a bolt of rayon/spandex jersey in a fabulous never-seen shade of slightly marled medium moss green. I could not leave any of it behind! It happily goes with a tonne of things in my wardrobe. T-shirts will ensue.

So I had better quit typing here and go warm up the rotary cutter, huh?

Nearly impossible to just buy a zipper or thread IMO. My fabric pile is so big right now that I've hit a BLOCK. Yep...can not pick what to sew next.

I like your Grainline. I've made two of her patterns; the free Hemlock Tee and the Grainline Archer and I like them both very much.