Back so soon? Yup. I’m trying to be a better blogger. Today I have some dyeing for you. First up, I had 3 metres of silk noil in a bright purple that was, shall we say, seriously uneven and stinky. Somebody gave it to me because if it were up to me that chemical reek would have made me pause. But for free? Bring it. And did I mention that it’s silk?

So the first thing I did was wash and dry it. Then I did it again. And again. Still smelled but less. However of course the colour was still blotchy and weird. So I decided to try discharging it. On a nice day last week I cooked it outside in thiourea dioxide and soda ash. The colour started to shift and there were orange patches here and there. But it never lightened evenly all over and when I lifted it out of the discharge bath it oxidised back darker again. Which led me to believe it was probably a synthetic vat dye. 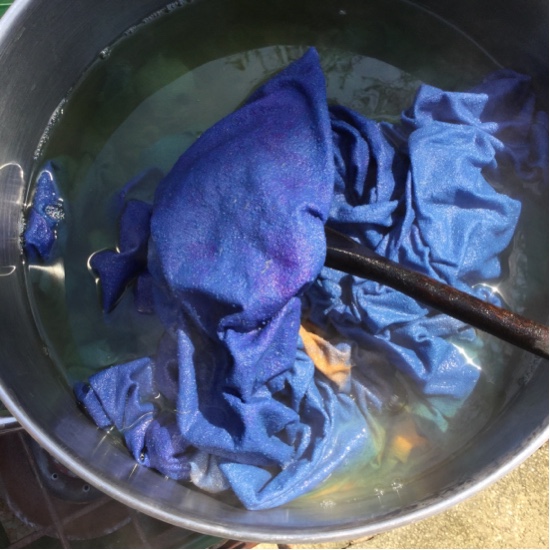 It was a lot lighter now though so I was going with that. In order to even it out I then overdyed it in Lanaset (Telana) black @ 4% weight of fibre. 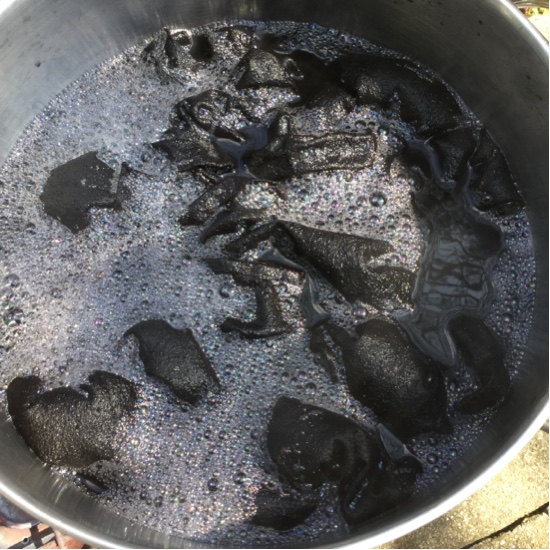 It’s still not quite true black but a nice fairly even colour. For once I managed to snip some wee samples as I worked so you can see the progression: 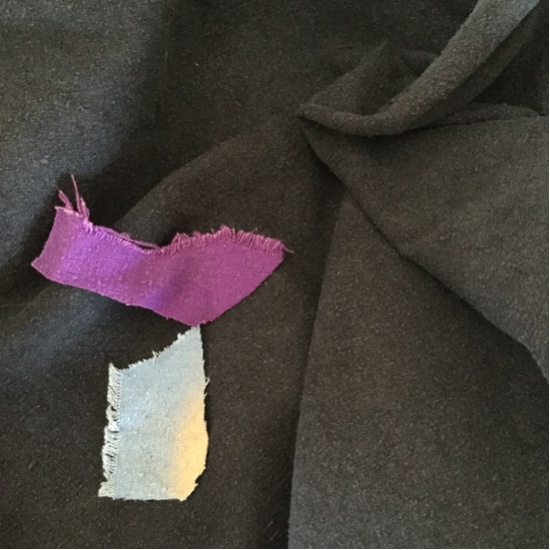 The swatches are a little darker in real life but the near-black is pretty close. And miracle of miracles - it now barely smells at all! It will become something to wear very soon.

My other dye project was 4 yards of prepared-for-dyeing linen muslin. I wanted to dye it in natural dyes and, since I recently bought some more cutch from Maiwa, decided that was what I was going with. I tried a couple of new-to-me technques with this pot. The first was from Maiwa when they suggested that a darker colour could be obtained by soaking the cutch (50% WOF) in a mild alkaline solution (1 tsp sodium hydroxide aka lye to 4 litres water) for an hour before neutralising and adding more water to the bath. Then I tried a second technique (and I’m sorry I forget where I read this recently) to just soak the cloth (no mordant) in the vat for a couple of days without heating it on the stove. I did give it some solar heat with the pot in the sunshine but left the linen in for nearly 3 days before I removed it. I squeezed it out and hung it up to dry without rinsing and then left it for another couple of days before washing in a little neutral detergent (Synthrapol) and drying it. The results were still fairly light. It’s difficult to photograph with my iPad but: 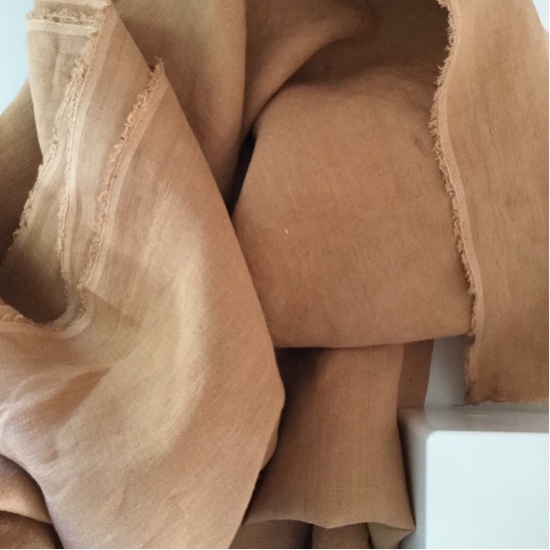 A little darker than this - warm tan on the linen fabric. A friend also added some alum-mordanted handkerchiefs to the bath and they came out slightly lighter and more yellowish. As I was removing the washed fabric from the dryer though I noticed that there were some red blotches on the end of the yardage: 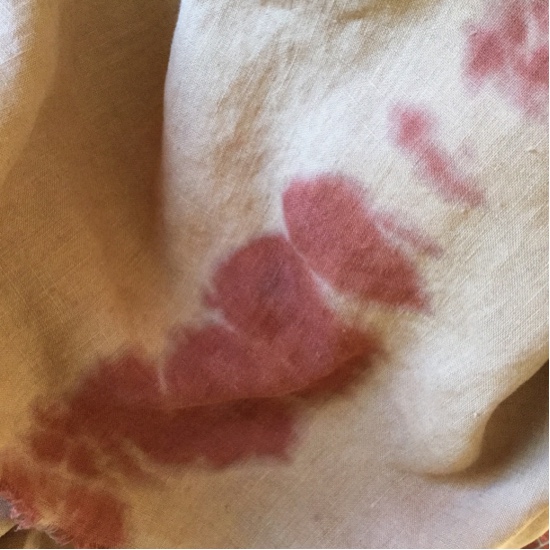 Uh-oh. Luckily it’s only on a small section at the end and I should still have enough to make at least one or two garments. But what happened? After some Sherlock Holmes-type sleuthing it turned out that I had dripped some soda ash water on the floor and it was still wet. The fabric had trailed through it as it came out of the washer and went into the dryer. Now I want to cut off a piece big enough for a top and treat the whole thing! Or try some shibori or something. However, my sensible side wants to leave well enough alone.

I had heard that an alkaline modifier would shift cutch to redder tones but not to this almost bright red. Was it the application of heat afterward that made it so effective? I haven’t rinsed it again to see if the colour stays put. Our tap water is pH 6.2 which is slightly acidic. A fabric that is so pH sensitive though makes me nervous. If I slop something on my top will it make a permanent stain? Hmmm..

Oh my, I have no idea what you're talking about - is it a witch's brew?


Gawd, you're dangerous in a kitchen!! I once bought a whole roll of silk noil really cheap. It was royal purple & some ninny put it into a sunny window display & bleached the folded end of the roll to a very dirty grey. I washed it & hung it outside in the sun on a clothesline so it would bleach some hang lines into the whole thing. I really wanted to throw some hot pink at it while it hung in the sun but couldn't find the right color. I wish I'd known you then . . . . . but I did wear several great interesting big sun shirts that summer, with big pockets too, over my shorts!!! I should check the stash & see if I still have any left.