Okay, I don’t have any sage because it’s not a herb I use much and my last plant croaked one extra-cold winter. But there’s bronze fennel, oregano, lemon balm and mint instead! The garden has been monopolising much of my time for the last few days so I smell rather fragrant now after pruning and tying up everything in sight. Mmmm...rosemary! Apart from the tomatoes, which are not pleasant so I washed rather carefully after working in the greenhouse this morning. The veggies are growing rather well this year thanks to the warm and sunny spring we’ve had. Now that the solstice is passed I’m picking peas and zucchinis and lettuce and raspberries nearly every day. The garlic will be pulled up soon. Impatiently waiting on the potatoes to finish and the beans and cucumbers to start setting fruit. It’s so inspiring - and delicious - to make meals with home-grown produce. Yum. 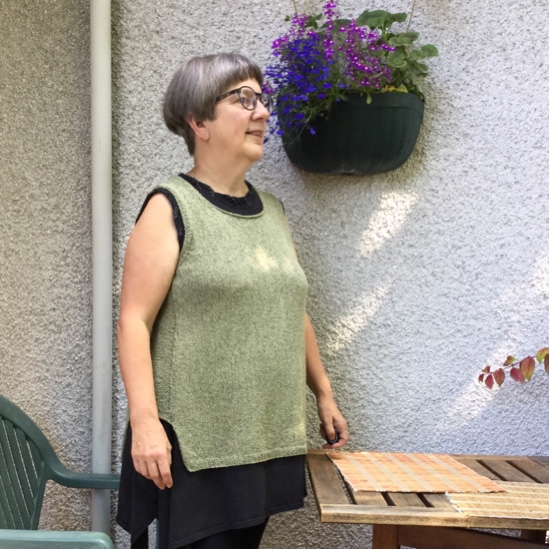 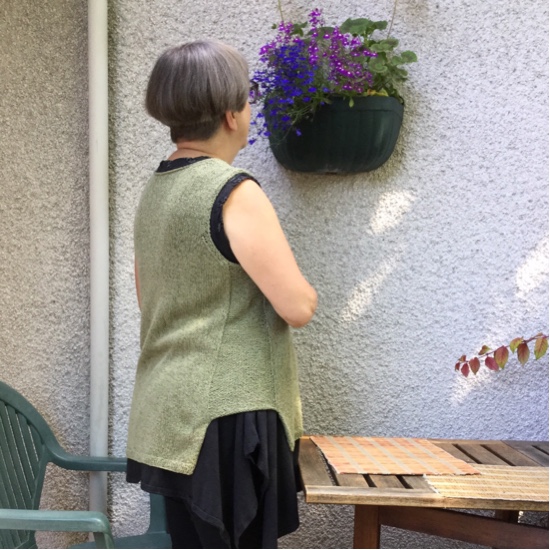 Meanwhile, between the weeding, I finished another knitting project: the Cholla Tank. The pattern is the Notched Hem Tank Top from Purl Soho. This was mostly pretty mindless knitting with doubled yarns from the weaving stash. I’m pretty pleased with it. I made a few modifications for fit, starting with a larger size at the hem and decreasing extra times to get the right number of stitches before the armhole split. I also shortened the armhole depth but still had to redo the armhole and neckline bind-offs to tighten things up more. I had already picked up less stitches than called for but also ended up finishing it quite snugly with the smaller needle size and a stretchy lace bind-off. Much better though I’ll probably wear it over another top anyhow as I did here. It’s not as bad as it’s namesake, the prickly cholla cactuses, but it’s not particularly soft even after washing and blocking! It’s rather light and drapey however and fits the way I like so I’m calling it a win.

Naturally I’m not short of more knitting projects. The linen Kilimanjaro Shawl has lost my attention again in favour of the Lacca Laneway Tunic which I’m totally loving so far. More about this soon. You need to see how nicely the subtle stripes are coming along. And of course there are 3 more projects in the wings waiting their turn. I do love the process of knitting at least as much as wearing the finished items. I’m beginning to think of myself as a Knitter, as opposed to just a knitter. It’s the one craft I need to do pretty much every day.

Up in the sweat shop (it’s been pretty warm in the Atelier these days!) I’m rather slowly working on the black linen blend shirt for Thom. I made some recent tweaks to the Thread Theory Fairfield Button-up pattern and this is the wearable muslin that I hope will fit even better than his first one. I have the collar, cuffs and buttonholes/buttons yet to sew. Since those areas are where the tweaks happened we won’t know if I got it right until I’m done! The suspense is not killing me enough to sew faster though obviously. It’s a long-sleeved shirt although lightweight so not a huge priority. He has lots of wearable short-sleeved shirts still.

I had better sew faster anyway because I was very naughty the other day after my weavers guild meeting. I walked from our new meeting venue in Chinatown over to Hastings Street. I was only going to get some thread from Dressew but noooo...I popped into Atex across the street first. After oggling and drooling a lot, I told the owner I would likely be back shortly. Not sure he believed me! I went over to Dressew and got my thread. And some buttons. And a length of cotton jersey in a speckly charcoal grey. Then I went back to Atex and got the last of a bolt of on-sale wool plaid and some natural linen crinkle. I didn’t really need these fabrics but I’m still pretty pleased, especially with the wool after I washed and dried it. Yes, in the washer and dryer! I’m brave. It came out so soft and yummy. Not sure what I’ll be making yet but you’ll find out eventually. Probably when I do! 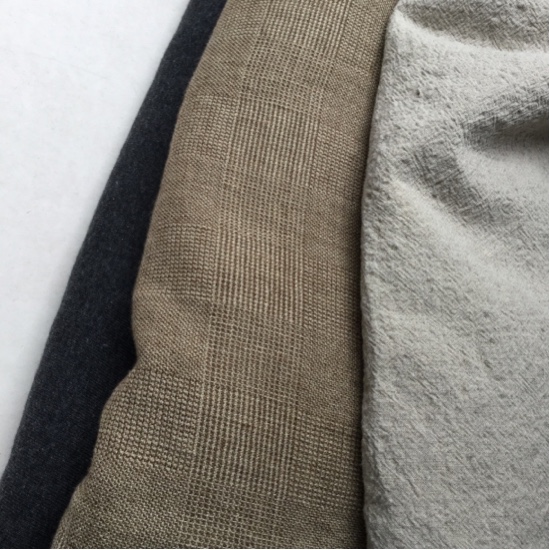 At least they’re all natural fibres, no synthetics. She says, justifying her purchases to herself. Hah.

Now pay attention, everyone! I am putting it out there where I can be called accountable. I’m officially declaring a Yarn and Fabric Diet for the foreseeable future!! Thread, other notions (like buttons and zips) and patterns don’t count if they are truly necessary but first priority is using up what I already have. I finally feel over-full...er, over-supplied! This feeling doesn’t happen to me often because I’m not really a crazy shopaholic. (Quit laughing, you!) But I have definitely amassed more supplies recently than I can use up in a reasonable time frame. So I’m calling a complete halt on acquisition right now and I’m not giving myself a concrete ending date. Let’s just see how long I last. All summer? Into autumn? Over winter? Your guess is a good as mine.

Meanwhile, I have a couple of fabrics from that stash that need scouring and mordanting. I have dye plants (weld, dyers chamomile) in the garden and needing to be used. Even if I don’t get around to sewing these things up for awhile it’s good to use the dyes when they are fresh and ready. I’d love to have a whole bunch of naturally dyed handmade clothes to wear. Extra points if I grow the dyes myself, right?

the knitted tank is really cute, looks like it will get lots of wear and I like the block pattern in the wool plaid. Looks like a modified log cabin. I too am spending most of my time in the garden, so nice to be outside and can't seem to catch up, everything is growing so quickly.

No kidding! You can practically watch the plant stems elongate and the peas puff out! Gardening is one of those things like housework that is never done. But it’s more fun than vacuuming anyway.