Tales From The Back Yard

It just started to rain but I’m not complaining. I really hope it actually rains enough to water the garden. It was starting to get dry. Again. Luckily it held off long enough for me to finish the dyeing I was playing with this morning. Though I had to hustle to get off the hammock (where I’d just relaxed) and take in all the equipment and the skeins off the closeline. I haven’t got a photo of the colours I got yet so I’ll hold off on my report until the skeins are dry. Which will definitely be a slower process in the basement.

However, that’s not all the dyeing I’ve been doing. At my guild’s monthly weave/spin/dye day on Saturday, we had a community pot of lac dye going. I included a skein of Cascade Heritage sock yarn (75% superwash merino/25% nylon) in the pot. When it came out I added it to a small bucket with 1/4 tsp copper and got this lovely deep burgundy: 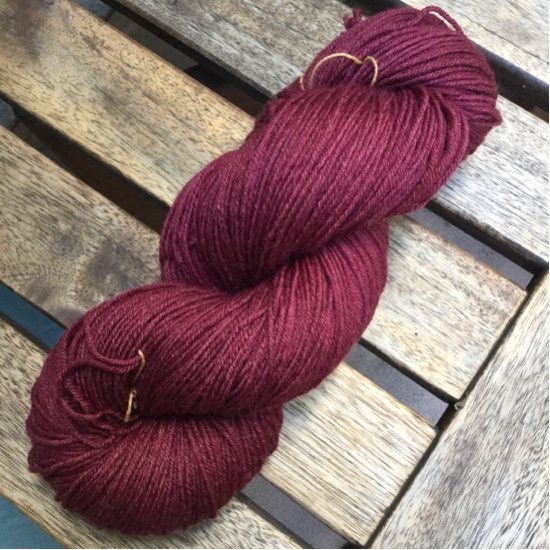 Lac is one of the insect dyes, Kerria lacca, found in India and southeast Asia. It’s a scale insect that hosts on trees and exudes a resin that is ground up and the colourant extracted. It also is the source for shellac. Lac gives crimson, reds, burgundy and purples and is somewhat more muted than cochineal but still very pretty. It’s sensitive to pH (especially acid so we added 3% tartaric) and gives the best most colourfast results on protein fibres though it will also dye cellulose as well. Just not as dark or as washfast. To prove it I threw some gungy-looking handkerchiefs in at the end and they are a much more pleasant rose pink now. The sock yarn practically sucked up all the dye in the pot and was by far the darkest of the yarns we included. The superwash process somehow opens more area for the dyes to affix and nylon, although it’s a synthetic, is easy to dye with anything that works on protein fibres.

I also finished sewing the second tunic from my latest self-drafted pattern. The weather hasn’t been particularly conducive to photos until the sun came out finally yesterday and I got these pics: 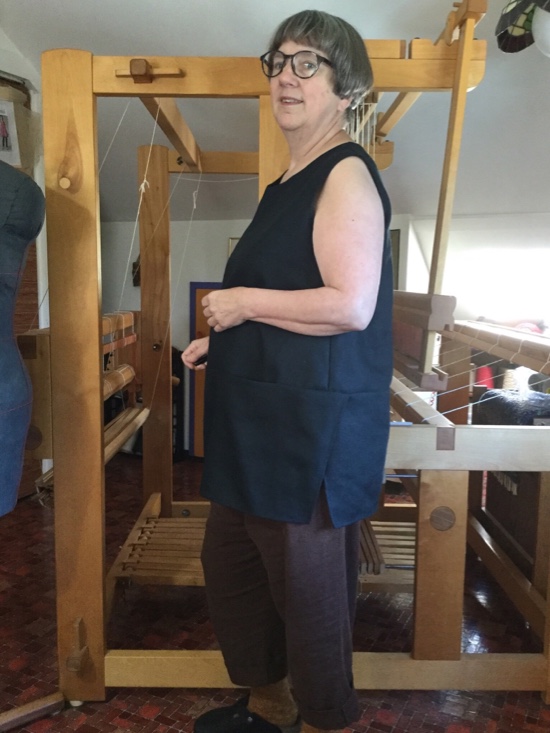 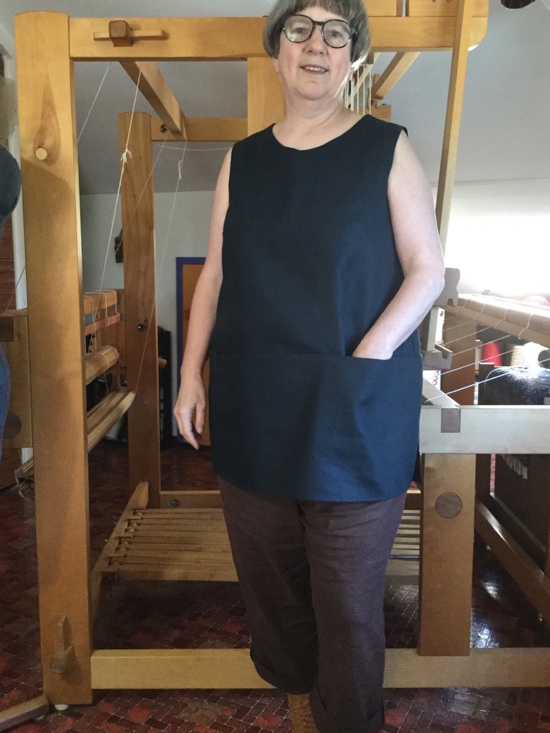 I modified the original pattern slightly by adding 2” length to the peplum. I like it better! Also this version is sleeveless. The fabric is some of the black linen blend that I used for the Leafy Metamorphic Dress underlayer. It’s quite airy but not revealing and it doesn’t crease much thanks to the polyester content (I suspect that’s what it is anyhow). I also used some scraps of black cotton sateen leftover from the underlining of my Marcy Skirt to make the pocket bags and the armholes’ bias binding. I quite like this top and wore it several times before photographing it and it doesn’t look very crumpled at all. I suspect there will be more of these tunics in future.

So now I’ve been sewing on the same black linen blend but this time it will be a shirt for Thom. I was a little concerned that my white interfacing was going to show through the black fabric which is fairly loosely woven but it doesn’t. Yay. I bought a whole 10-yard bolt of my favourite Pellon SF101 fusible woven interfacing but I could only justify one colour so I went with white. I wish it came in more of a neutral but only white or black is available. If it hadn’t worked out I was tempted to use fabric paint on it to tone it down! It’s 100% cotton so chances are I could even use a cold-water dye if I was careful. But I’d rather not if I don’t have to. I plan to use it to make a lot of shirts for Thom and I’ve also used it on the collar and button placket on my Batik Alder Shirtdress. I love this stuff. No puckering, bubbling, curling or other shenanigans. Just nicely crisp results. Use it just on the top piece for a softer more casual effect or both top and bottom pieces for a more formal shirt. This one is getting the more casual treatment mostly because a) it’s quite a lightweight fabric and b) he just doesn’t do formal! More on this one soon.

Well I haven’t been keeping you informed on my knitting progress either. I have 3 projects on the go currently: one portable and easy (nearly-plain socks), one not-so-portable (Cholla Tank), and one complex (Kilimanjaro linen shawl). The socks are nearly done, just the toes left to knit. The Cholla Tank (pattern “Notched Hem Tank Top” from Purl Soho) is nearly up to the armholes. This is the one I’m knitting on while reading since it’s mostly plain. And the Kilimanjaro Shawl (pattern “Good Day Sunshine” by Amanda Bjoerge) is coming along slowly. Those Estonian star stitches (3 into 3, 3 into 4 etc.) are definitely not-so-fun to do in non-stretchy linen yarn! After putting it off for the better part of a year I’m determined to finish the darn thing. Scorpio stubborns for the win! I hope.