A Wash and a Brush Up

Hello! Yes, I’m still here! We’re having a perfect summer with gardening, walks, creativity and relaxation. Here’s the comfortable spot that we take turns enjoying in the afternoons: After sorting through all my clothes, I gave all the woolies a going over with my Gleener to clean off the pills. It works pretty slick! Then I washed the worst offenders to freshen them up. I can only do a few at a time due to space constraints, especially with the shawls that need blocking after washing. I only have just so many blocking wires and the mat only holds about 3 at a time. Here’s the red batch: 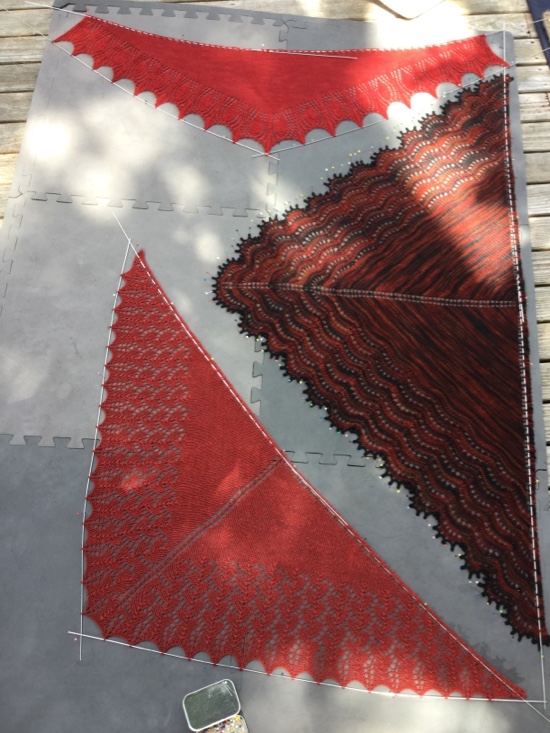 And today, the black batch: 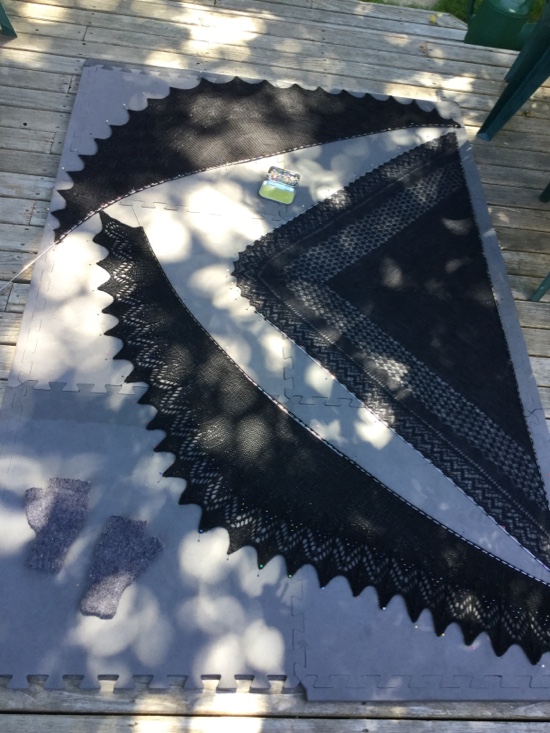 These are all shawls that I wear regularly and so need a bath at least once a year! Besides these and half a dozen sweaters, I also washed a lot of my mitts and gloves which get really grubby and a couple of hats. There’s still 2 more shawls to go but they’ll have to wait until these are bone dry. This whole procedure has taken at least a week to finish since we had a couple of days with some rain. Not that I’m complaining when the garden gets a better soaking than I can give it with a hose!

Speaking of the garden, I’ve got empty spaces in some of the beds now that the garlic, potatoes and early greens have been harvested. I just started some new seeds indoors in the Grow Op because if I try to direct sow them in the garden they will be eaten off the second they come up. There’s only a few veggies that will survive including swiss chard, arugula and carrots so the lettuce and other greens are relegated to the flats under the lights until they’re big enough to survive outdoors. I would have had some all ready to go in but things finished earlier this year than I was expecting so I’m running a little behind. No biggie. We aren’t planning to go away this September as we usually do so I can try some fall-into-winter gardening for once.

So of course while all that was going on I haven’t accomplished much else in the studio. But that’s OK. It isn’t a contest, right? I’ve been knitting away on my two projects, the Lacca Laneway tunic and the Linen Trillian shawl whenever I get a chance. They’re coming along at just under 50% completed each. I also bought the new men’s Cargo Shorts pattern from Wardrobe By Me for Thom and have it printed out, assembled and cut out in his size ready to go. It took me a little effort to figure out what size to choose. His jeans have a 34” waist which fits the way he likes but the pattern sizing says a size 31 = 34” finished waist. Huh? The size 34 is much too large. Are these European sizes? Why can’t the pattern size be equal to the waist size? Anyhow, I’m hoping the 31 will fit since the waistband facing does actually measure 34” after subtracting the seam allowances and overlap. As usual I’m considering this first pair as a wearable toile so I’m not pulling out the good linen or hemp for them. I know I have something suitable in the stash somewhere. It’s going to be fun to choose the pocket lining fabrics too! I have lots of exciting options there. More on this when there’s more to tell.

Meanwhile, the hammock is soooo comfy....