Sounds like a quidditch-playing wizard’s new broom model, doesn’t it? Heh. As I mentioned last time, I was finally ready to give up on my venerable Pfaff. We were starting to have irreconcilable differences, she and I. It was time to look for a new love...er, sewing machine. But what make and model? I applied my google-fu ninja skillz.

First I wasn’t sure whether I wanted a mechanical or a computer machine. I kept flipping back and forth during a whole two days of online investigation. Note that my Pfaffs (both sewing machine and serger) are basically mechanical machines. I’m not at all afraid of computers but I do know how easily they can go out of whack. I wanted a machine that would hopefully last for the rest of my sewing life and not need to be serviced every 5 minutes. On the other hand, computer sewing machines have lots of nifty bells and whistles that the mechanicals just don’t have: automatic needle up or down, tacking at the beginning and end of seams, more stitch and buttonhole options, memory to save settings, etc. Some of those would be nice to use, but since I’ve been sewing without them for 60 years or so, I deemed them not especially necessary.

It wasn’t easy to find a relatively basic but not too simple sewing machine! So many of the machines today are made for quilting and embroidery. Perhaps perfect for an art quilter but I’m mainly a garment maker and don’t need 300 fancy stitches. I didn’t even use half of the ones I already had on my old Pfaff! And can one really trust online reviews to be accurate and non-biased? What I was actually looking for seemed like the proverbial unicorn. You can do all the research in the world but sometimes you just have to jump in the deep end.

Of course, being an old Pfaff ffan, I first looked at their current models. My nearest sewing machine store is a Pfaff dealer but they still haven’t gotten with the 21st century and don’t have a website. Doh. I think they also carry Janome and BabyLock but since I’ve never had very friendly service there (even though that’s where I bought my original Pfaff 40 years ago and my serger 10 years ago), I skipped them entirely. Also Pfaffs are no longer made in Europe and they are just part of the same company as Singer and Husqvarna/Viking. Meh. I also didn’t want a Bernina, even though there are those who sing their praises from on high. Too rich and too fussy for my taste.

So finally I checked out Janome. It’s a Japanese company with their machines made in either Japan or Taiwan. Good overall reviews. And best of all, they had several models that would fulfill my criteria. I found out that the largest Canadian dealer is Toews Sewing in Abbotsford, an hour+ drive from me and lo and behold, they had a sale on the HD5000 model! So we went for a drive. Big shout-out to Alayna who gave me great advice and service, not to mention a deal on all the extra feet, needles and bobbins that I bought along with my machine. She even looked through her parts suppliers to see if replacement feed-dogs were available for the old Pfaff. (As I thought, the answer was sadly no.) 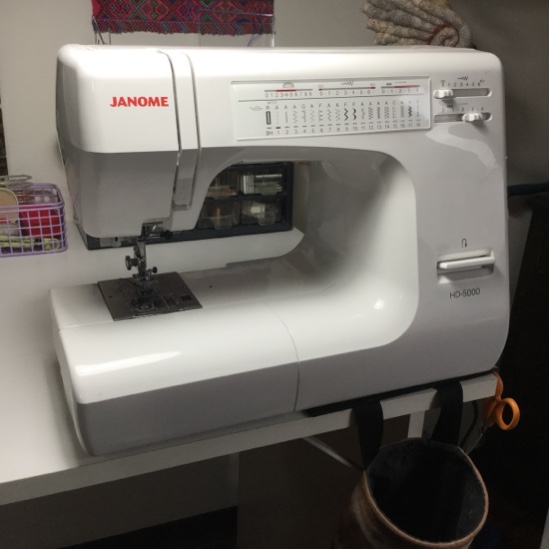 A mechanical heavy-duty sewing machine with an aluminum body underneath all the plastic. It’s heavy and powerful. Only has 18 stitches but all the ones I use regularly and at least one more that I’ve always wanted. Also a single one-step automatic buttonhole, a built-in needle threader, 7 feet included (and I bought several more just because I could!), a free arm, a hard cover and everything fits in the body of the machine: 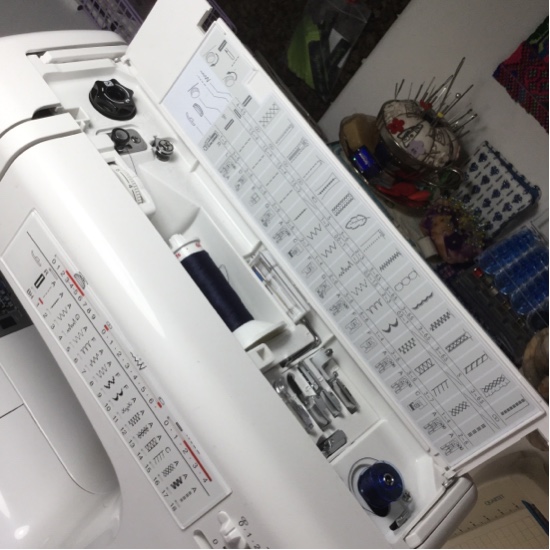 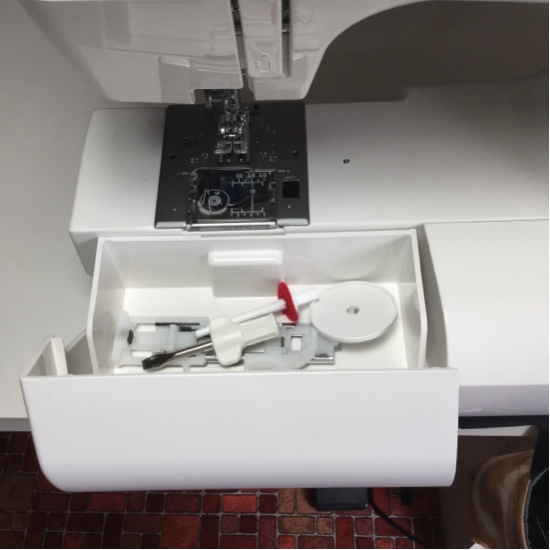 The inside of the lid has all the stitches and their settings for easy reference. The manual (which I checked out online before heading to the store) is basic and has clear illustrations which I definitely prefer rather than photos. However, it was missing info on how to set up for twin-needle sewing so I remembered to ask Alayna about it. Easy-peasy. The only things my old machine has that this one doesn’t are the Pfaff’s patented IDT (built-in walking foot) and an automatic needle up (on the Pfaff you press down on the presser foot lever to raise up the needle to its highest postition and to bring up the bobbin thread). I’m still working on remembering to use the flywheel to raise the needle manually! The Janome’s 7-part feed dog has very positive traction so I don’t miss the IDT foot at all but just in case I also got a regular mechanical walking foot: 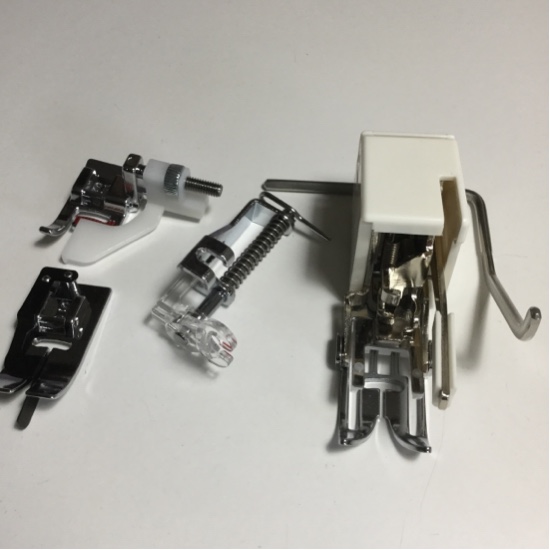 That’s the big beast on the right along with the rest of the extra feet I indulged in. I haven’t used any of those yet! I’m also still waiting on a button foot and a straight-stitch foot and throat plate which are on order. Why not, eh? My sewing pleasure is worth it, right? And you’re going to laugh: the whole package ended up costing no more than my Pfaff did 40 years ago! And less than half what a comparable level of computer machine would be. 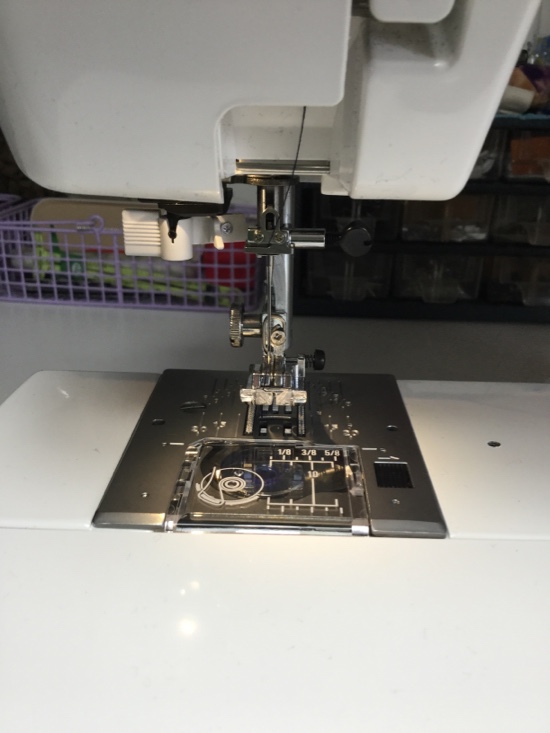 Now for the not-so-good news - there’s an issue with my new machine. Sigh. Hopefully it’s easily fixable. The top-loading bobbin is totally new to me. It’s very easy to use but for some unknown reason, the holder/basket/cup/thingy that the bobbin sits in pops out of position occasionally while I’m sewing. It’s done it several times and now I know exactly what’s happening right away and can stop and fix it. However it shouldn’t happen at all! I have an email message in to Alayna and I’m waiting for her reply on whether there is something we can do remotely or whether I need to bring the machine back in. Apparently they use these machines in schools and prisons (!) and demo them sewing through 10 layers of denim and shoe leather so obviously they are tough beasts! Wouldn’t it just figure that I’d get one with a problem? Yeesh.

Meanwhile, I’ve already sewn a pair of stretch boot-cut pants and a skirt in navy poly/lycra french terry. It was exciting to use fun things like the lightning stitch, a twin-needle and the hem-stitching foot on real projects. I still have a top in this same fabric to sew and then I’ll let you see the results. These garments were already cut out so I just dove into them. Otherwise I might have chosen something in a woven to sew first. But I plan to throw everything at her eventually! I’d ask you to cross your fingers for me that the naughty bobbin holder is easily fixed but then you would find it hard to knit or sew. And that would just be mean! So think positive thoughts for me and Jannie instead, OK? Thank you.

Whenever I watch Craftsy classes and they say to set your machine to auto needle down I get a bit jealous, LOL. It really sounds like the ultimate indulgence. But seriously...I'll probably remain a mechanical machine girl...but I'll decide when/if I have to. I have a Bernina...didn't realize they were considered expensive. I think at the time I was buying...early 80's...they were comparable to Pfaff?

The mechanical Bernina I looked at was nearly 3 times the price of my Janome and with less features. Though maybe it would behave itself better! Mostly I think I just have to be more careful with winding the bobbin. We’ll see if that helps anyway.

Congrats on your new baby, Louisa. Hope it's just a case of hiccups. When my Singer from high school died, I had to face the music and all the overload of info. I did end of getting one of the ridiculous computerized machines with a gazillion stitches that I knew then I would never use. But it had all those nifty gadgets, like auto thread cutter, auto needle threader, filling the bobbin while the needle is threaded, button hole foot, sewed on buttons, blahblahblah.

oh good, decision made, a new "toy" to play with. I have a mechanical Janome - ancient now, hoping it will last me to the end of my sewing years. It has been problem free and a good basic sewer. I'm not into the fancy stuff, even my 16 harness dobby loom is mechanical. Have fun, hope the bobbin problem is soon sorted out.

Could it be something as simple as he wrong bobbin?? All those plastic things look the same to me but apparently they are different. I really must get my new-to-me Janome up & running. I love all the goodies & feet that stay IN the machine!! And mine has a few embroidery stitches - I have no idea where I'll ever use a leaf . . . . But, I know if I set it up, I'll go SEW crazy & neglect all the stuff I am working on now.

Sharon, I'm using the plastic bobbins that came with the machine! They have a J on them. And there's no mixing them up with my old metal bobbins which are too large to fit.

BTW that "leaf" you see on your stitch chart (I have one too!) is deceiving. It's really just the settings for a zig-zag applique.