OK, I now understand why Instagram is becoming way more popular than blogging. Because it’s so much quicker and easier! No trying to marshall your thoughts and match them to your photos. No linking information or hunting down details. Oh dear. Am I getting lazy? Maybe my brains have just melted away into a pile of goo. It’s certainly been hot enough! I don’t do well in the heat. I just want to sit there quietly and read a book and drink copious amounts of liquid. No action. No thinking. But you want to know the details, right?

So where was I? Oh yeah, we were taking off on a seniors’ tour with Thom’s mom. She very kindly invited us even though she knows it isn’t really our thing. Not that we aren’t seniors, because we definitely are! But we still prefer to travel on our own, go where we want, stop when we wish, sleep in our own bed and eat our own food most of the time. However, the chance to go places we hadn’t been before without any responsibilities sounded like fun! And it was - to a point. There were a few glitches though. I’m not naming the tour company but if you live locally you could probably figure it out. Some glitches were unavoidable but some could have been handled better. That’s all I’m sayin’.

Anyway, the trip we chose mostly consisted of a lot of ferry/bus/boat/bus/ferry kind of thing. Luckily I really love the water and the BC coast is just incrediblly beautiful. The weather was really cooperative too and for a miracle it wasn’t too hot at all, except on the last of the four days. Day One we headed up the Sunshine Coast with a stop in Gibsons: 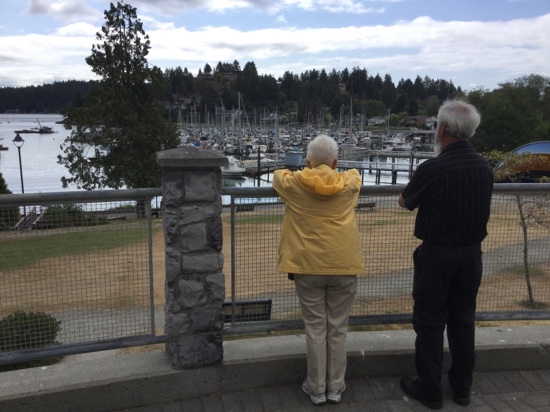 BTW there’s a great dress shop in Gibsons called Swish. Lots of my kind of clothes! Mom and I oggled them but didn’t buy anything. Then we had lunch and a walk in Sechelt: 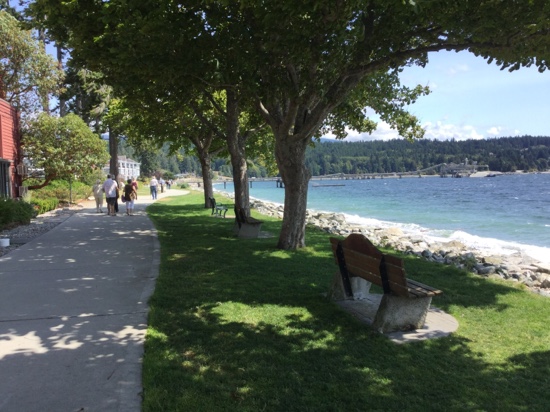 Another ferry and more driving past Powell River up to the end (or beginning) of Highway 101 at Lund: 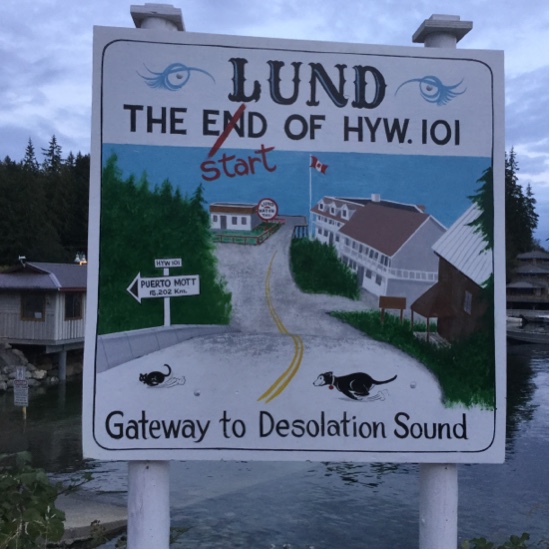 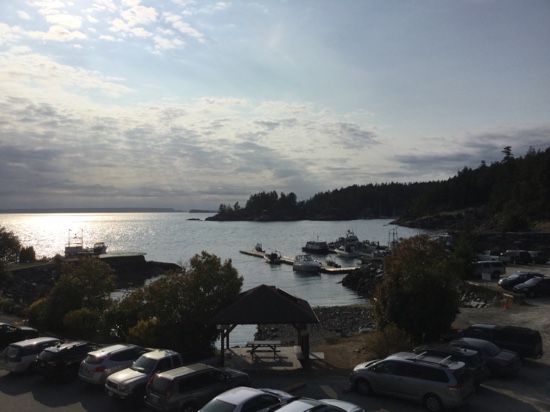 Supper at the Laughing Oyster was fantastic! We overnighted at the historic Lund Hotel which was also very nice and recently renovated.

Day Two didn’t quite go as planned. Our bus driver wasn’t able to catch the two ferries that he needed to get to Cortes Island to pick us up so our boat tour up Desolation Sound ended up taking a detour. Here are the two boats (ours is the closest one, the Carrousel, and the second is the Agate Pass): 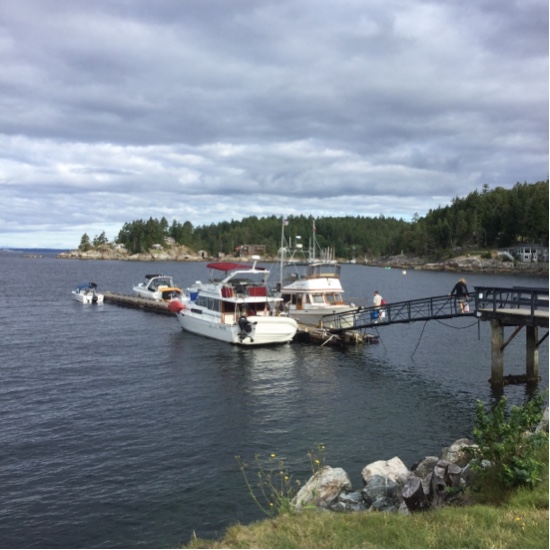 And that’s our yummy lunch being carried by our skipper and his wife to be stowed for later. Even if the cruise was longer and we only got a glimpse of Desolation Sound it was still a lot of fun. 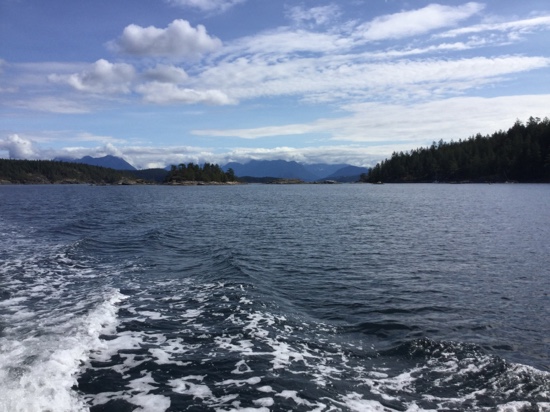 We saw plenty of sea birds, seals, eagles and finally whales! No photos of the whales because I was too busy watching them. Oops. Lunch was onboard with both boats anchored in Gorge Harbour: 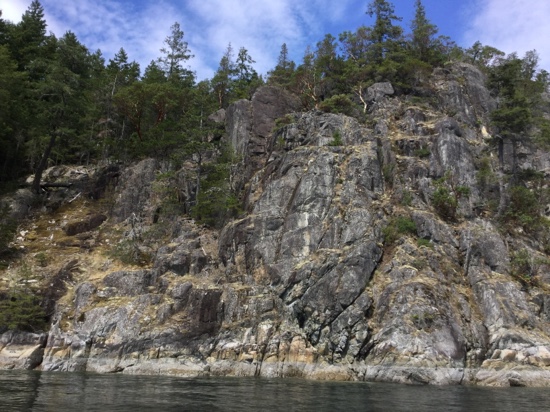 It’s a narrow entry but opens up into quite a large bay. This is only a corner of it: 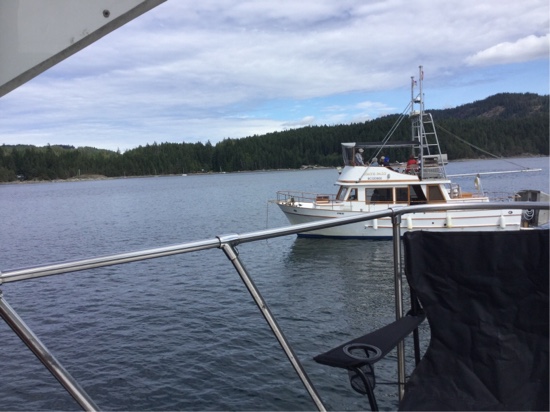 After lunch we got serious and headed for Quadra Island’s Herriot Bay where our bus finally managed to meet us and took us to our lodge at Tsa-Kwa-Luten: 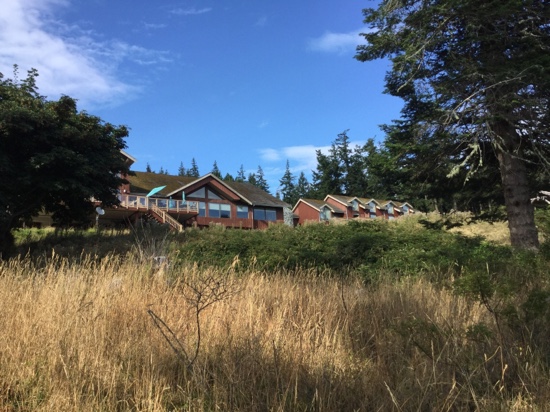 Every room has a view of the water and Campbell River across the strait.

Day Three took us to the island’s outdoor Saturday market instead of to the Nuyumbalees Cultural Centre in Cape Mudge village. It was unfortunately closed due to the death of a chief which we totally understood. We did get to see the petroglyph stones that have been relocated there from the beach in front of our lodge not far away: 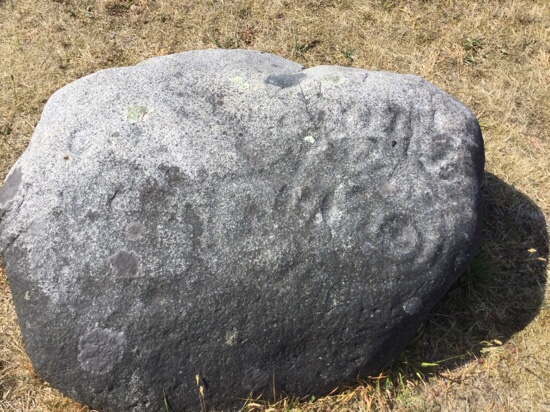 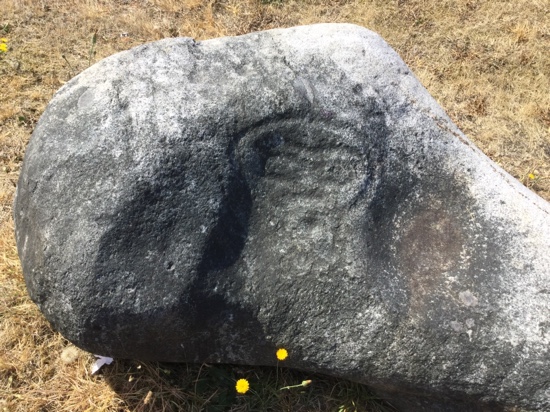 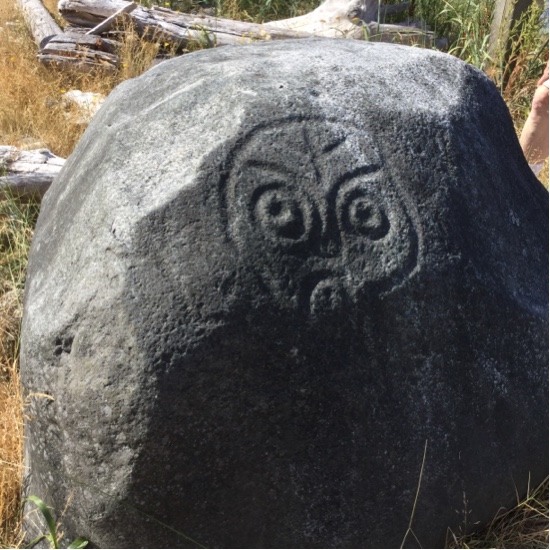 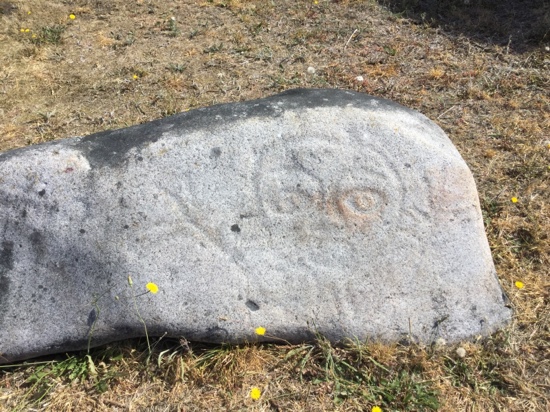 You know how I loves me some petroglyphs! These are all faces and are around 3000 years old. Some have been re-pecked into the rocks several times over the millennia. There are lots of petroglyph rocks still on the beach but the images are much harder to see after waves and weathering. Also the beach is uncomfortable cobblestones to try to walk on. I was glad these were available so I didn’t have to trust my balance and the tide!

We stopped at Rebecca Spit for our picnic lunch. It gets quite narrow: 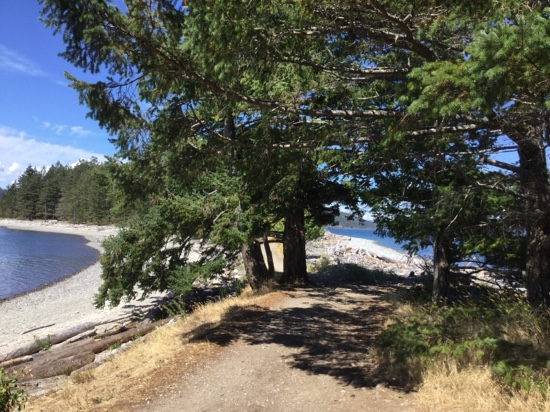 It was lovely to finally get a good walk in around the tip of the spit where we watched the ferry heading to Cortes Island where we were supposed to have been the day before. 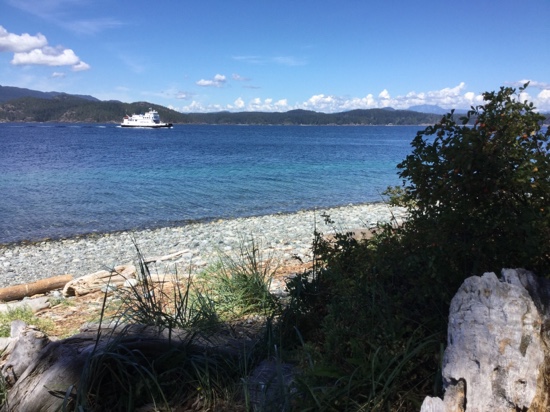 Later after dinner at Tsa-Kwa-Luten we got in another walk to the Cape Mudge Lighthouse: 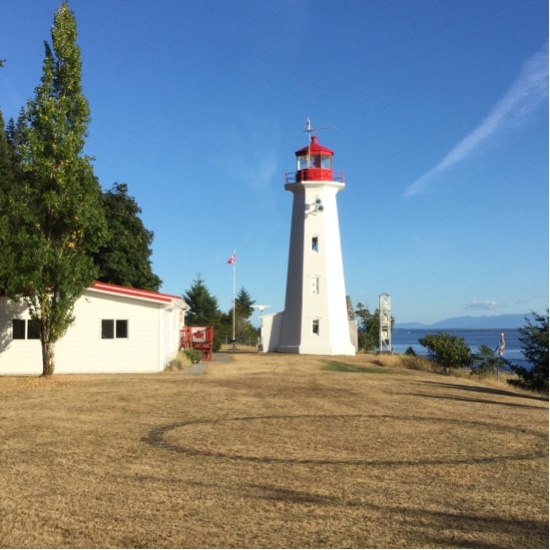 And then further down the beach trail to the private campground associated with the lodge. We could come back here sometime in our van which would be fun and explore Quadra Island some more. There’s a lot we didn’t get to see.

Day Four was the long trip home. The ferry to Campbell River, lunch in Qualicum Beach, down to Nanaimo and the ferry again to Horseshoe Bay. The tour manager and the bus driver opted to avoid the Pride Parade traffic by going over the Workers Memorial Bridge instead which made the ride much longer, especially when they took the, ahem...scenic tour. Those of us in the back of the bus were getting quite silly by the time we got to our starting/ending point at VanDusen Gardens. I was super glad to finally get home. There’s a reason why I schedule our personal travel days to usually not more than 5 or 6 hours! That’s plenty but this was more like 10 hours on the road/water/hanging about in ferry terminals. I was pretty impressed at how well they all held up (except perhaps the tour manager!) considering Thom and I were probably the youngest passengers.

Told you it was going to be a Magical Mystery Tour! And it was.

Sounds like a bit of an Endurance Test, if you ask me . . . . but, as you said, it's somewhere you haven't been before & you can go back in the camper on your own. Glad to see you made it home in one piece in all the heat. I'll bet your garden was glad to see you come home!!!

Welcome back home, safe and sound. Now back to gardening, sewing, et. al.