Hello, my little autumn leaves! How are you? I’m fine but I dunno - am I falling for the Instagram (quick & easy) over the blog (more work & time)? I was hoping not, but judging by the lack of recent blog posts I’m not doing as well as I should be. Bad damselfly. I’ve written to you lots in my head! Just not for reals. Oops.

Anyway, if you’re still with me, the weather has been quite variable for the last couple of weeks. We’ve had sun and rain and more rain and it’s downright chilly unless you’re in the sunshine. My house was 15C (59F) inside this morning. Time to add another layer of blankets on the bed! We’re playing the “how long can we go before we get cold enough to turn up the furnace” game. The sun is bright and warm today though so I should be able to remove my woolies later on! So far I look like this: 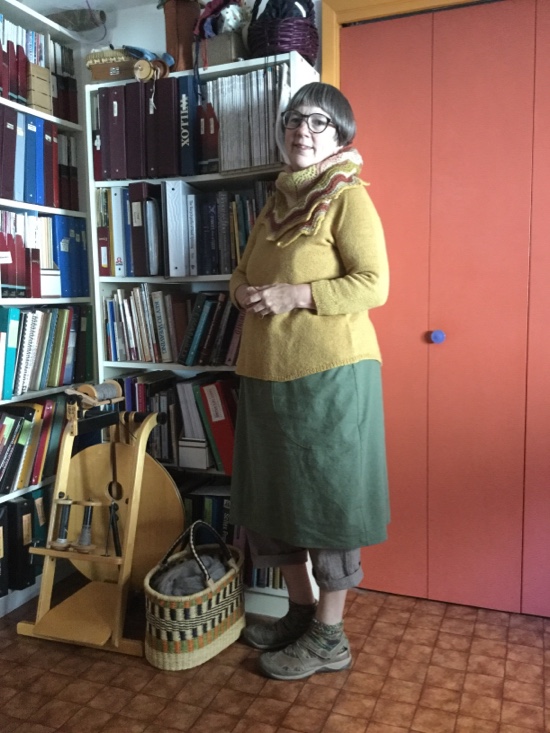 But I could seriously add fingerless mitts to the outfit! That’s my Multnomah shawl in handspun yarn dyed in rhubarb roots and leaves, madder and blackberry shoots all from my garden. The James sweater (mine is named Sunny Jim) is also dyed in rhubarb root. (Which reminds me, I still have the rest of a bucket of roots to chop up before they mould or get too hard to cut!) Underneath is my latest make, a modified Helen’s Closet York Pinafore. Oh, you’d like to actually see it? 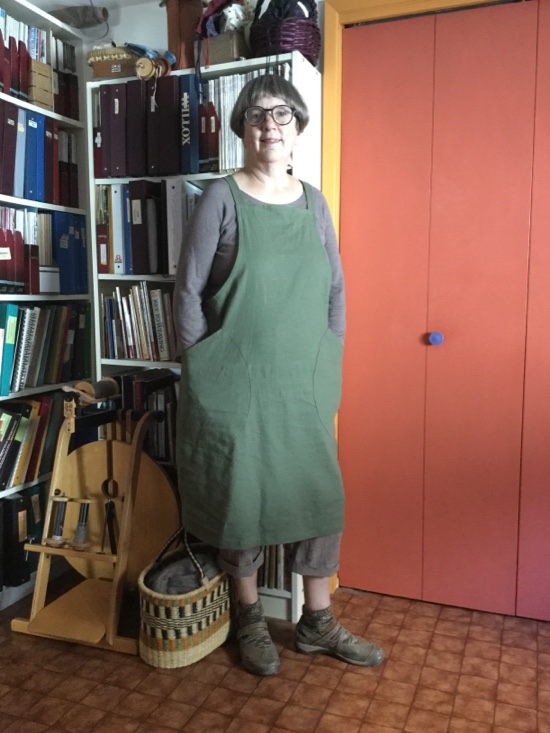 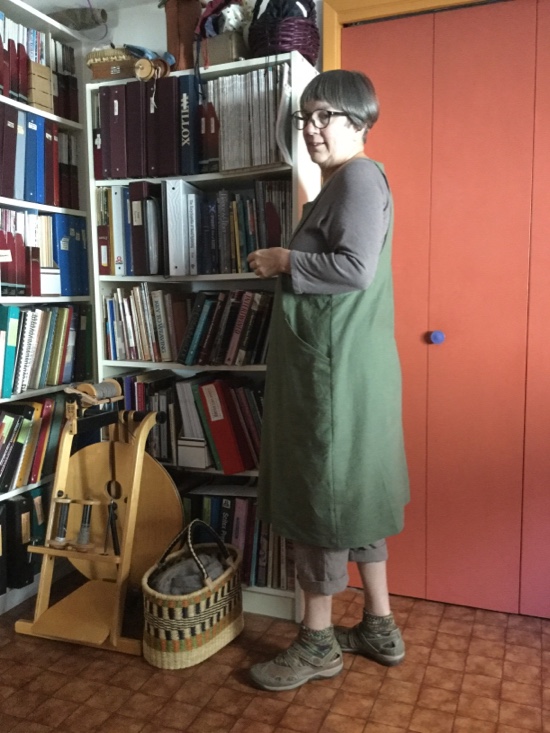 The fabric is a medium weight linen purchased at Atex awhile back for another Thread Theory Fairfield Button-up shirt for Thom. I wisely bought 5M because it’s a nice colour and a nice weight and mostly so I could have something out of it too! I ended up being able to fit the shirt and a Grainline Farrow with enough leftover to squeeze out this York. I used Helen’s hack for spaghetti straps with a few mods. I didn’t have enough fabric to make full facings so I just made ones for the tops of the bibs and used bias binding to finish the rest. 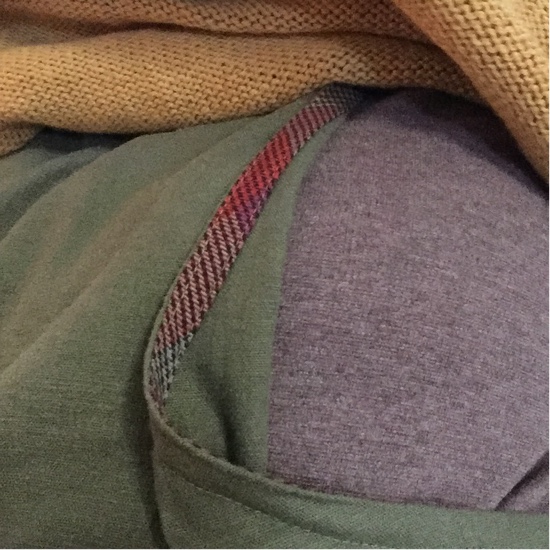 Hope you appreciate the weird contortions it took to selfie my fabulous bindings for you! I wasn’t about to remove anything to do it. Cold.

The results are quite soft and a little floppy but I think it’s ok. The straps are wider (1”) than spaghetti and I had to fudge with the angle at which they are attached before I stopped getting weird folds. My sloping shoulders demand to be accommodated! It took several unpickings and re-sewings before they were reasonably acceptable. One of the 3 garments done and I’ve worn it several times already proving that it doesn’t even wrinkle too badly. Next...

I was really productive and chopped out about 8 garments in total. I get into a space where I’m working with the patterns or I’m cutting out a bunch or I’m sewing things up in batches. I figure I should just go with what works for me rather than do one item at a time from pattern to sewing up. The only drawback to this method is if I don’t get it made within a reasonable time frame I might not get it made at all. Tastes change. Needs change. Bodies change. Then I’ll be left with chopped up pieces of fabric that are very hard, if not impossible to make anything else out of. Nae sae guid.

Speaking of sewing, Jannie my new sewing machine and I are getting to know each other better now that I have 4 garments under my belt. I still reach for things in the wrong place occasionally but the muscle memory is starting to stick. I still have that bobbin holder issue but only very rarely and I’m pretty sure it’s operator error and that there’s nothing fundamentally wrong with the machine. At least I’m going with that for now anyway.

In knitting news, I sadly pulled out quite a large chunk of my Lacca Laneway Tunic when I realised that the skein of lighter mauve was too different from the last one and showed unsightly lines where I shifted over. 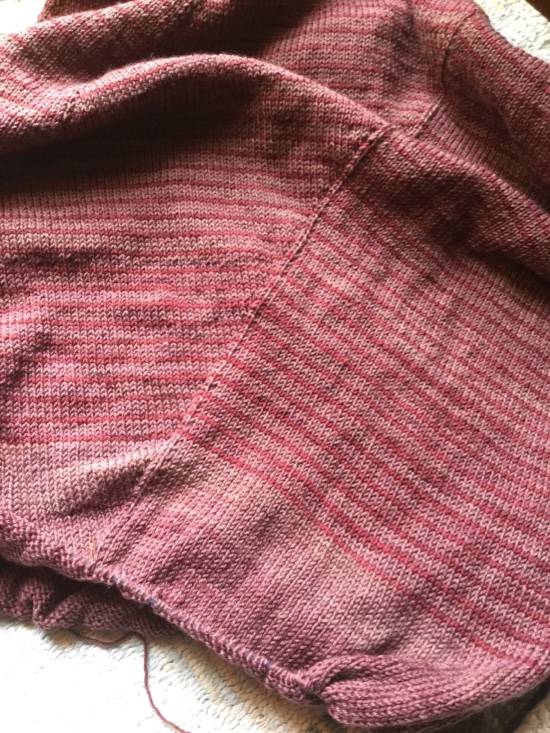 Unsprisingly it didn’t improve when I continued knitting so I just frogged it or I would have continued to wish that I had done that earlier. I’m nearly back to where I was and it definitely looks better with another more even skein. This is from right after I frogged and got it back on the needles: 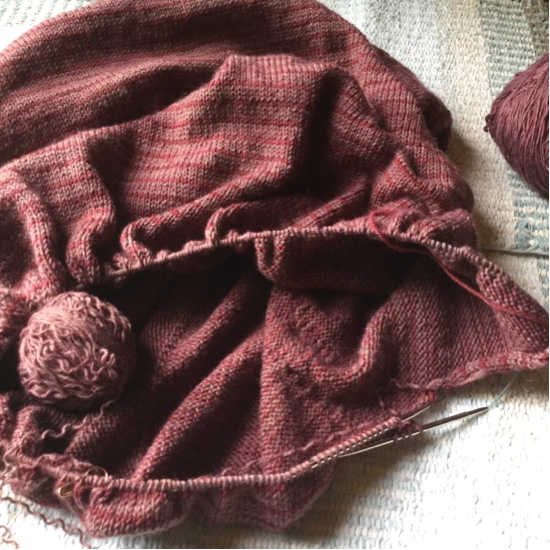 Don’t have a current photo yet. Have to say, this beast is taking forEVAH to finish. Love it so far however. It’s gonna be worth all the trouble.

In the garden there’s not a lot of edible stuff left. There’s the scarlet runner beans that perked up once it got cooler. The other beans are toast. I’ve got the second batch of asian greens and lettuce I planted and they’re doing well along with the herbs. I need to plant the garlic bed soon. And dig up and replant the madder once it dies back further. We already got the rhubarb done which I’ve been putting off for a couple of years. I planted 7 crowns back into a larger space so they can grow for the next 3 to 5 years before I have to dig them up again. The rest are going to be used for that lovely soft yellow dye. Here’s what the beautiful big roots look like: 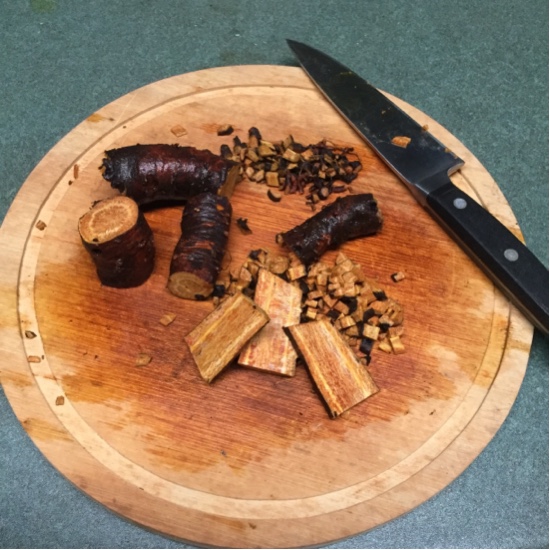 It smells quite nice while I’m chopping, kind of sweet and woodsy. My sweater still retains a little of that scent too. They aren’t too hard, a little softer than carrots, but I have to work on them in reasonable sized batches or my hands get sore. I’m not risking my functionality for some free dyestuff. I’ll just take my time.

In other news I have a report on some of the textile exhibits that we were able to see on Granville Island. These were in conjunction with the Textile Society of America conference that just wrapped up here in Vancouver. However, this is getting long and I need to get back to the choppy-choppy thing. Next post will be sooner rather than later. Promise.

I love linen fabric, but this is the time of year I tend to put my linen skirts away. I should try layering them as you have - what a great way to extend the wearing time.

Your natural dyeing is very impressive!

Thanks so much for visiting my blog. :)

Thank you so much for visiting, Sue!