So I didn’t do very well with the promise to post more often, did I? Naughty damselfly! No excuses but the weather was glorious for the past few weeks. We decided to run away to Tofino for a week or so. It was perfect! The campground in Pacific Rim National Park was stupidly closed (it seems they’re doing some construction) so instead we stayed at Bella Pacifica on MacKenzie Beach. It worked out really well since it was close enough to also enable us to walk into town and to access the Tonquin Trail and Chesterman Beach without having to drive. The campground is pretty rustic. Basically a parking spot in the bush with a plug and a picnic table. The washrooms were unheated and the water tepid. Showers were coin operated too - a pricey $2 for 3 minutes - so we settled for spit baths. At least we had our plug-in heater! The nights were chilly but the days were warm enough for shirtsleeves. Warm enough for the best gelato I’ve ever had at Chocolate Tofino. Mine was Dutch chocolate. Now I want another one. 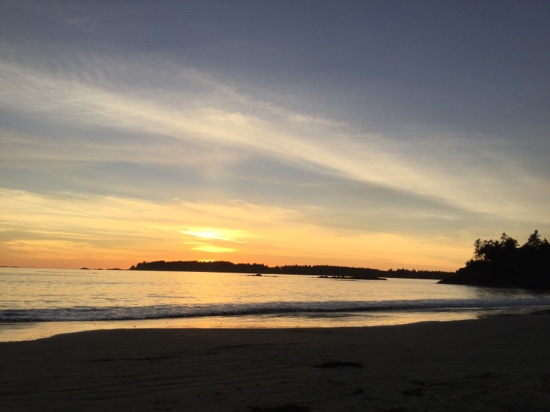 We had a very relaxing time! And our last night when we were running out of groceries we had an amazingly delicious dinner at SoBo, one of the many fine eating establishments in Tofino. I swear, for a small town of 2000 souls they sure know how to treat the tourists. No wonder it’s crazy busy in summer.

We also drove down to Ucluelet, just so Tofino’s main rival didn’t feel left out. They have a really nice trail system called the Wild Pacific Trail which we explored. It’s a pleasant forest trail with peek-a-boo views of the ocean and the Amphitrite Lighthouse. There’s also a longer section along the coast that we didn’t explore. Yet. Gotta save something for next time, right? 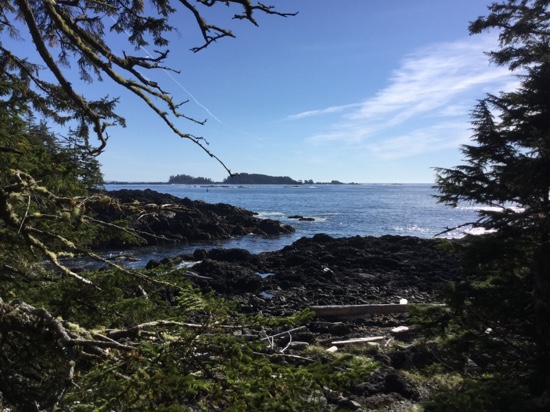 What else? Oh yeah. I spent 2 days digging up my dye garden and harvesting the madder: 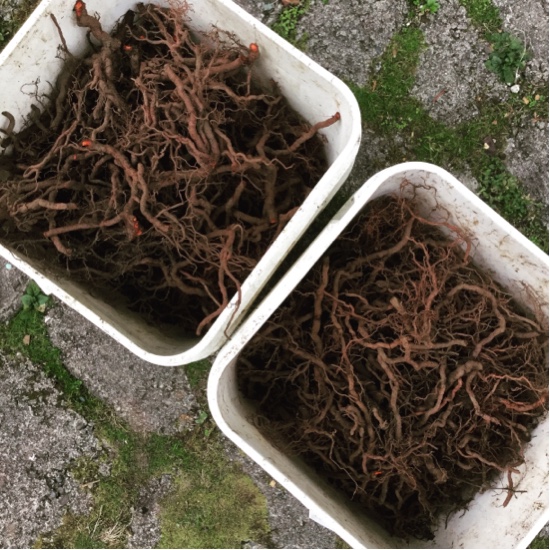 Two buckets full which is not too shabby for my wee garden strip. I’ve replanted the crowns in a different section this time and they’ll get another 3 years to grow before they get dug up again. Can you tell that it’s pretty easy to tell the madder from other roots. They’re pretty smooth but brittle and bendy and definitely have a reddish colour. If in doubt you just have to break it and see the orange centre. Now I have to dredge up enough energy to wash them all and chop and dry them for storage. Just like the rhubarb root! Sigh. The things I will do just for some natural colour. Madder is one of the very few reds so it’s precious. Too bad the plant itself isn’t one of my favourites. Not particularly attractive, it sprawls all over and attacks you with scratchy leaves and stems when you pass by. I’ve had my revenge now. Mwa-ha-ha!!

Did I show you Thom’s latest shirt that I finished just before we ran away to the coast? 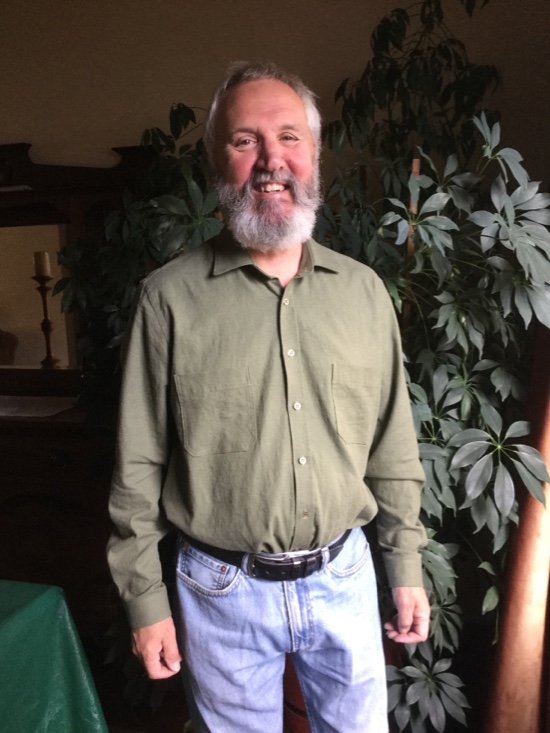 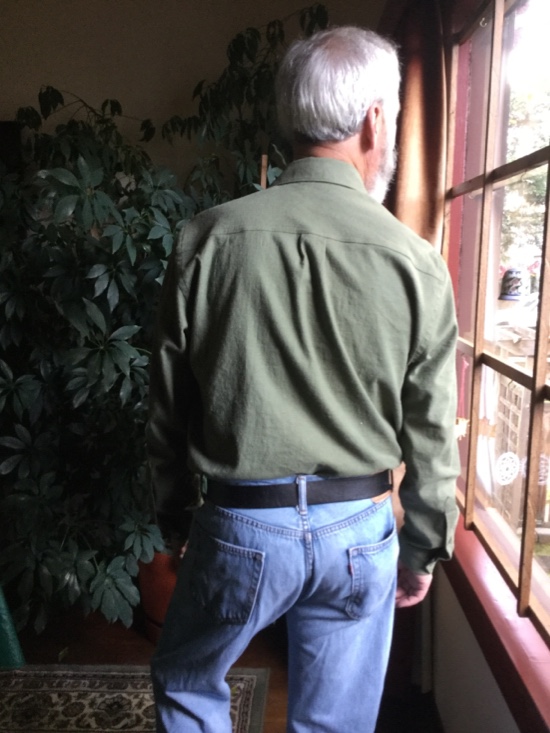 It’s the same pale green linen that I made my hacked York Pinafore from. I love that stuff! I still have a Grainline Farrow cut out which is next on my sewing queue. Plus there’s another shirt for Thom in the gray version of this same fabric.

And in knitting news there is no news except that I haven’t actually finished anything. I have 3 projects going but I seem to be concentrating on the Highland Shawl (actually named the Study Hall Shawl from Knitty): 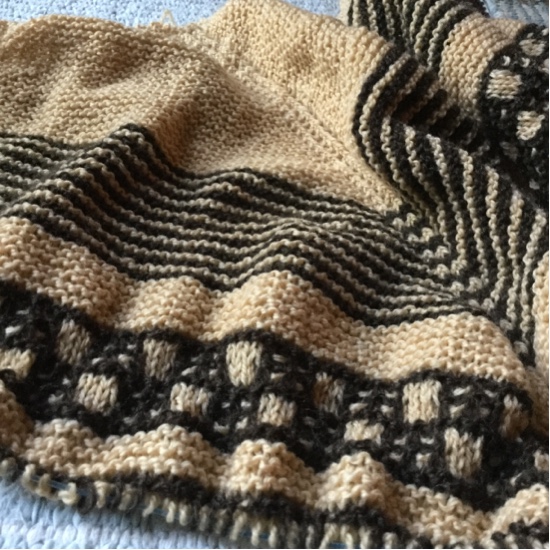 Also related to knitting, I had a pair of socks that I’m very fond of that are getting thin under the heel. I tried to figure out when I knit these but it predates my Ravelry membership by several years so sometime between 2001 when the pattern was available to the end of 2004 when my more detailed notebooks start. The pattern is Prism by Jaya Srikrishnan and I think I might need to knit another pair someday soon. It uses two colours so good for leftovers in a slipstitched stripe.

Anyway these socks are about 15 years old! Goodness. Guess they’re worth the mending, huh? I channeled my inner Tom of Holland and his lovely visible mending and got out the darning egg, made for me by my Thom, and went to work: 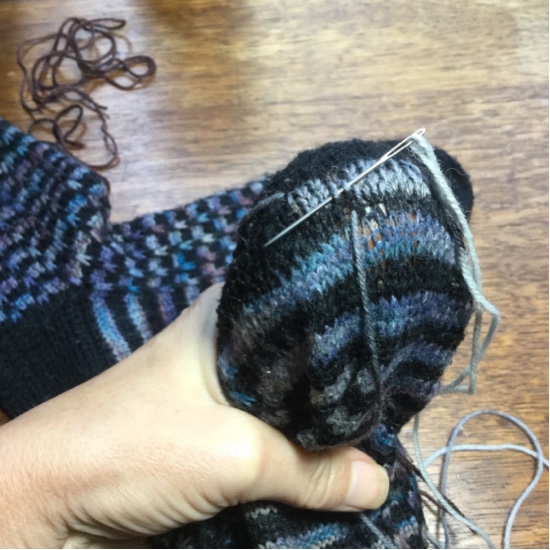 Swiss darning, aka duplicate stitch. It helped that the yarn wasn’t quite worn through so there was a scaffolding to work on top of. I’m not usually one who makes sharp holes in socks, just wear mostly under the heel. 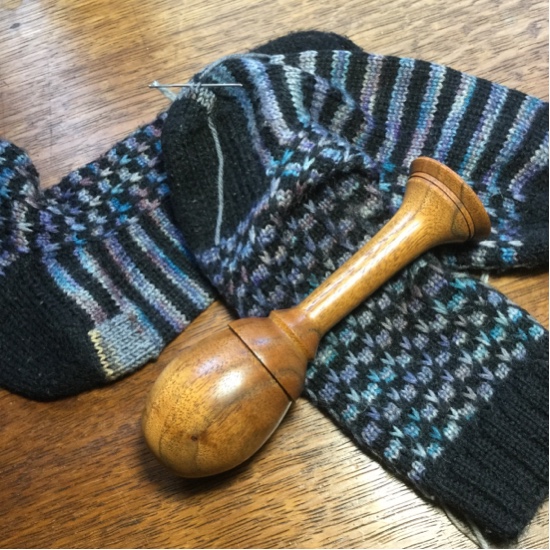 I also made liberal use of my magnifier light. These older eyes aren’t quite up to tiny stitches without help. 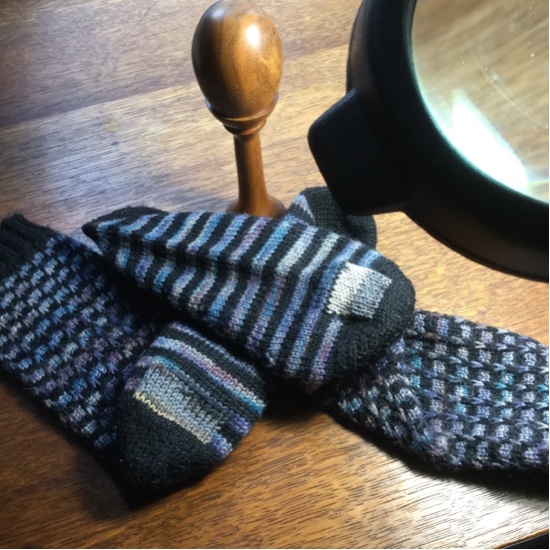 I went for similar yarns but not matching since who knows if there’s anything left by now. They’re probably included in my two Ten Stitch Blankets made from sock yarn scraps. Anyway, I think they’ll give me a few more years of wear now.

So I recently tried to write a post to talk about my Slow Fashion and how it fits with what I’m doing and have basically been doing for decades now. However, it self-destructed. I think this post is much more true in some ways. But I haven’t given up on a theme that I really want to put down in a tangible way. Coming soon. Though I’m not making promises because it seems that will jinx it!