Well, I don’t understand why it should be called Good Friday. It wasn’t a good day for that guy a couple thousand years ago, now was it? It didn’t rain all day today as it did yesterday, but I’m cold for some reason. I have more clothes on than usual but I’m not warm enough. Time to locate something warmer to put on. Or as Brenda Dayne of the Cast On podcast always says “If you’re cold, put on a sweater. That’s what they’re for.”

Speaking of clothes, I did a leetle beet of shopping the other day when I was at the mall. (I had a dentist appointment so I had to go there!) I got lost in the ladies department in the Bay where I managed to find a few new items. This is the second time in as many months that I’ve actually liked something and (miracles!) it fit. Perhaps the styles are starting to come around to being wearable on women older than 15 and heavier than a broom handle? Well some of 'em anyway. I got a couple of ribbed t-shirts with a “golf-style” neckline (the one with a button placket and a collar), a regular t-shirt, a short-sleeved blouse (made from the neatest elastic-ruched fabric), and a slinky rayon lace-knit 3/4 sleeve sweater. Plus a couple more bras to replace my 10-year-old ones with no discernable elastic left in them and a pair of shoes (well, sandals). Most of the items are my staple colour — black — but two of the t-shirts are muted red-orange. One is brilliant yellow-orange and I’m hoping that it will help the cars avoid me if I wear it on the street. Though maybe it'll make me a target. Who knows?

What I didn’t buy were the very fashionable beaded and sequined t-shirts that were prevalent on the racks. Whatchacallit…the Boho Look? I quite like them (hey, there's beads!) but they won’t hold up to wear or washing. Some were already starting to look frayed. I’d rather wear my beads as a separate thing that doesn’t need to be cleaned as often as clothing does. Another item I passed up was a cotton and cashmere sweater that was already showing pilling and lint problems. Even if it was drastically on sale, I can look linty, pilly, and rumpled any day of the week already without spending more money to do so. That’s why I have cats.

I also didn’t get the sandals that I really wanted because they were uncomfortable where the buckle dug into my ankle. The ones I got are a simple slide style (no buckles) but even they aren’t exactly walking shoes. I’ve been wearing them around the house with socks on to break them in. Some days I just don’t want to look like a “granola” in my Birkenstocks, OK? Even if I did recently pay $40 to get my Birkies re-soled and repaired. And yes, my new sandals are black. Of course. (The Birkies are green though!)

So now I have a few new things that actually fit and don’t look too old or baggy like the rest of my wardrobe. I’m still stalling on starting to sew more clothes. I know, my new serger is calling me and yes, I can hear it. However, I’ve been reading a lot and looking at clothes in the shops to get some ideas. I’m liking the kind of raggy-edged deconstructed look but I’ve mostly seen it in skirts. I’m not going to make a skirt that I’ll rarely wear so it would have to be a jacket or something else instead. I also like the capri-length pants with pockets and buttons and drawstrings and such. The pants are getting a bit wider in the leg now and if I make them myself, they will actually fit and with a real waist too. I have to admit that I have no idea what commercial size I am: 10? 12? 14? Since the garments I bought are mostly L but there’s an M (the blouse) that is actually larger than the L’s, even S/M/L/XL isn’t particularly definitive of anything. I have to try everything on. Guess that’s a common problem? I go clothes shopping so seldom, I don’t know what’s normal these days.

And some of it I don't want to know. It’s tough actually. I’m somewhat-more-than-middle-aged but I’m neither a polyester pants nor a jeans kind of girl. I don’t work outside the home so I rarely wear anything dressy. I have definite likes and dislikes in shape, colour, fabric, and style. Plus I’m a fibre artist so I want to show that off to some extent but stay comfy and casual at the same time. I’m almost always wearing something I’ve made. Right now it’s just hand-dyed handknit socks. But I made them.

So in honour of the season, this is my Christmas cactus that thinks it’s an Easter cactus. And yes it did bloom at Christmas too but a bit early. It was a cutting from my mother-in-law’s plant some 34 years ago. Purty, huh? Note the handwoven runner underneath. And T-Man's turned bowl filled with agates and other rocks we've collected. It's a Handmade Life around here. 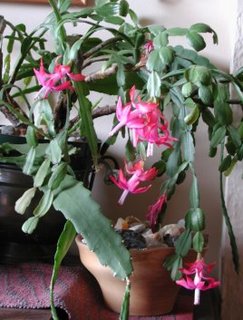