That’s what Syne at WeaveCast calls it when you do more than one craft. Yes, that’s IT! I knew there was a reason other than that I have the crafty version of ADD. Right. Sure.

I finished the wacko vest/top thingy from Vogue Knitting and guess what? It’s most definitely wacko. Even my increase and decrease stitch choices were somewhat inconsistent. Nobody would be able to tell though unless you get really close! Since the cotton/linen yarn was really old, I washed it in Orvus and ran it through the washer’s spin cycle to get out the excess water, then blocked it out on towels to finish drying. That’s where it is at the moment letting the air do its thing. Meanwhile I’m making a kumihimo braid for the sides. It’s an 8-element braid called Kusari Kaku Yatsu (which means “chained square eight” and it’s only got 4 moves. Very simple. It kind of looks like it’s knitted with V’s up each side of the square cross-section. I’m braiding with a single strand of yarn on each bobbin and I added an extra ounce of weight to the counterweight for a total of 11 ounces to make it a bit softer and not so stiff. I hope to put some beads on the ends after I thread the ties through the knitting. This thingy doesn’t cover much anatomy so it’s definitely an embellishment piece. Like a torso-sized necklace. No idea where I’ll ever wear it. I’ll await my opportunity. Picture coming as soon as it's really finished.

I also made a pair of silver wire and bead earrings today. T-Man’s beads are rarely made in pairs but these two go together well enough. They’re dark red-brown with an “orange” raku frit speckled on. The frit is mostly earthy ochre colours rather than the bright orange you might be picturing. I think they came out rather well and I have to give credit to Stephanie of A Realization In Texture, Color And Movement…blog for the design idea. They were very quick to make and I got to use my pliers and my hammer and my bench block and my cup burr — Tool Time! 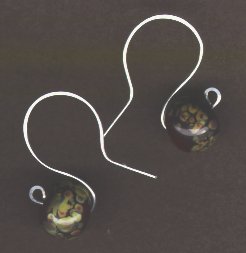 I have to teach the first lesson for a new group of newbie Beginner Spinners tonight. There’s only 5 so we should be able to manage OK. I hope. Hafta go eat something and fortify myself first though. The first night is always the hardest.