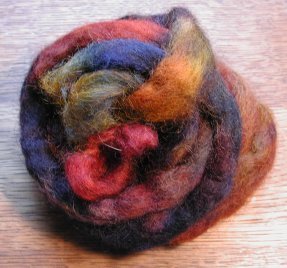 It started out rainy today, the T-Man is back on his early shift, and I’m feeling like doing a little catching up. The Dye Day we had on Saturday went off without a hitch. We had a lovely bunch of folks including my first young male dye student. He’s a new spinner and very keen. I was too busy to take any pics during the class unfortunately. But here is the piece of grey roving that I demonstrated dye-painting on. Purty, huh? Too bad that’s only enough for a few yards of yarn!

I’ve been reading a lot: books, magazines, and online publications. Today I checked out the free parts of KnitNet. This was the first online knitting magazine and was originally completely free, but in the last couple of years they’ve gone to a paid subscription-type model where the articles and a sampler of patterns can be viewed free but the rest is for subscribers only. The patterns aren’t impressive enough to pay for, in my opinion so I just read what’s freely available. They don’t keep archives either, preferring to sell CDs of the year’s patterns. I guess they need to make money, but Knitty.com seems to be able to manage to keep going with free access plus their patterns are far more fun. If I’m going to pay for a magazine, it had better be on paper and worth the price to me. BTW, KnitNet’s current issue shows a Honeycomb shawl with knotted fringes where the fringe ends are left all ratty and uneven. Couldn’t they afford a few moments to trim them? Ick. I’m feeling cranky about this magazine: editorials, patterns, paid subscriptions and all. Opinions? Talk amongst yourselves.

Whilst I’m on the subject, some more online mags: Spun Magazine still doesn’t have their next issue up though it was supposed to be out in March. Website now says April and we’re well into the month. Sigh. They’re having some editorial changes and difficulties. Hope it gets solved soon. I know how much work it must be to put out an issue but people forget to check for the next one if it’s too long between. The same goes for the AntiCraft (though their website problem was solved pretty quick) and the MenKnit magazine both of whom have only had a couple of issues so far. Southern Cross Knitting from Australia is now sadly gone bye-bye (which is why I don’t have a link).

More positively, Knitty.com has their spring ’06 issue up now and it’s a goodie as always. There’s an excellent article by my friend Sivia on knitting with beads. There’s an article from Michael “Wormspit” Cook on silk with a great recipe for degumming. In the patterns, I want to make the nautiloids! And I especially love the article on the history of knitting because I think it’s the most accurate take on this I’ve seen. Go. Read. Most of the mags I mentioned have links in my sidebar too.

While I’m on the subject, over at MagKnits which is British-based, they don’t have articles but they have some fun patterns. In the new April ’06 issue, I particularly like the skull wrist warmers with the “girly” skull sporting a pink bow! Spindlicity has their spring issue up too with some great articles including spinning a flame yarn and a pattern for a pretty fulled Garden Beret that includes embroidery. And last but not least, the Spring issue of Crochet Me has some really cute “amigurumi” patterns, which are Japanese-inspired crocheted critters. An interesting addition that this particular mag has is the opportunity to leave comments on patterns and articles so you can go back later and read what others have to say. Cool.

So what else? I’ve been reading my Serger Secrets book from cover to cover but I’ve been avoiding actually putting the secrets into practice. Yet. Found a funky vest/top pattern in Spring/Summer Vogue Knits (the one with the tooth-decaying picture of the blond in a pink knit skirt) that I want to make. No, NOT the pink skirt or the actually-boned corset or the skinny little ’60’s dress, but the green top on p.84. It’s kind of deconstructed off-kilter-ish cables. This Vogue issue also has an article by Iris Schreier, the queen of the short-row diagonals, which is why I bought it actually. It certainly wasn’t for the “Very New Very Vogue” stuff which is pretty old-hat if you hang around the knitting blogiverse at all. Ryan Morrissey’s Dulaan project for Mongolian kids, Yarn Harlot’s Knitting Olympics, Freddie Robbins’ knitted wedding — all got lots of coverage previously elsewhere. That’s the trouble with printed media. They just aren’t as au courant as the Internet can be. BTW, has anybody noticed how much crochet is starting to become part of knitted garments as well as just more crochet in general appearing in knitting (as opposed to crochet) magazines? We really need to mix ’em up more and get over that big “cultural” divide that seems to be out there. I can’t understand it myself since I’ve been able to do both since childhood. I like them for different things.

OK, I need to spend some time beading on my mermaid doll, Ulva. (FYI that’s a type of sea lettuce.) I’ve missed a deadline in the Beaded-Art-Dolls Mermaid Challenge so I have to get a move on if I’m going to make the May 1st finished date. The next challenge is Celestial and I’m looking forward to it! Without the impetus of a challenge or swap or demo, I know I’d never get much done, I’m sure.