Today we have a theme. I discovered this button on Knit and Tonic’s blog and it made me think about how many socks I’ve knit in my lifetime. I knit my first pair in 1987 but I also won a prize for the handspun set that included them. That was cool! But since then I think I’ve only knit about 31 or so pairs, most of them in the last year or so since I discovered self-patterning sock yarns and the fact that they are a lot harder to wear out than my old ones. Before that I used handspun yarn which took time to create and then they wore holes, got patched, wore more holes, and sat in the sock repair drawer until I either mended them or forgot about them. (More likely the latter.) That first pair in a Bohus-type stranded pattern has now morphed into a little purse: 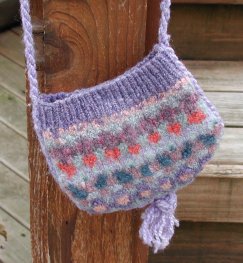 And I can knit plain socks in my sleep — except for the heels and the occasional dropped stitch. But anything more complicated and I have big trouble finishing them. I make tons of mistakes and have to frog back. I can only work on them while not doing anything else, which definitely doesn’t happen often. So why do I like to knit anything else besides plain socks? For the variety. Just to prove I can. To drive me back to plain socks from the frustration. I currently have something like 5 or 6 pairs on needles and only one of them is getting knitted on. You guessed it! The plain-knit socks. Sheesh.

While we’re on the socks theme, I thought I’d mention my all-time favourite sock knitting book. “Sensational Knitted Socks” by Charlene Schurch. With this book you’ll never need another sock pattern. She covers all the things I would have if I’d written it first, and then some. Top-down, toe-up, plain and fancy, ribbings, pattern stitches, charts, and tips — it’s all there. Except how to pay attention to what you’re knitting. I think she expects me to figure that one out on my own.

So since I always have several pairs of socks on the go, I guess that makes me a member of the Sock Nation too. I’ll put these buttons on my sidebar later. The only way I know how to do that is to put them in a post first. More buttons to come. I hope.

Off to my weavers’ & spinners’ guild meeting this evening. We’re having a talk from Julia Mantius from Oleana Norwegian sweaters. Should be interesting. The sweaters are nice with machine knit colour patterning but kind of pricey so I don’t think I’ll be buying anything.

Hi Louisa - It's dull and wet and the perfect day to catch up on your blog. It always adds a bright spot!