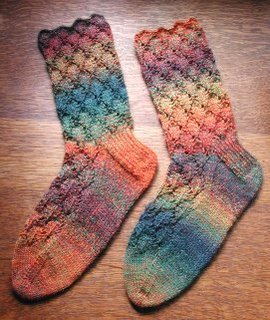 Yes, I finally finished these socks that I started sometime in March. I pushed a bit at the end to get them done. Here’s the pattern and although I began with a pattern write-up generated by Sole Solution, the design is mine. Feel free to knit your own but don’t forget to give ol’ Damselfly credit for the pattern!

Pattern:
This pattern calls for a repeating motif of 8 stitches beginning on motif stitch 1. 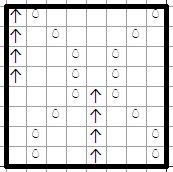 Leg:
Cast on 64 stitches very loosely. There is no ribbing on this sock and the pattern forms scallops on the top edge which will curl if the cast on isn’t loose enough. Join in a ring being careful not to twist. Mark join as the beginning of the round. Divide stitches over 4 needles. (16, 16, 16, 16) There will be 2 repeats of the pattern per needle. Knit circularly for one round even. Beginning with Needle 1 and Lace Leaf Pattern, knit leg stitches until desired leg height is reached. (I did 5 repeats.) End with Pattern Row 16.

Begin Heel:
NOTE: Heel is worked in rows on 32 stitches on Needles 1 and 2. To set up, knit across those two needles onto a single needle. Turn.

Knit in heel pattern until you have 32 heel flap rows (16 sl st up the side of flap). Heel flap shape should be close to square. End with a purl row.

Repeat rows 3 and 4, increasing 1 additional K or P stitch after the Sl 1 until all side stitches are consumed. End with a purl row.

Gusset:
NOTES: There needs to be one extra stitch to balance the lace on the top of the foot so inc one st on Needle 2 before beginning the next lace round as indicated. Work that extra stitch as a knit in Rows 1—7 of Lace Leaf Pattern and in the plain even rounds between. Also adjust the Pattern at each side of the foot for odd (lace) rows 9–15 as follows: Instead of the double decrease at the end of these rows, work a SSK at the beginning of Needle 2 and a K2tog at the end of Needle 3.

Gusset Decreases:
NOTE: The gusset decreases will be on alternate rounds to the lace rounds.

Sock Foot:
Continue knitting in stockinette on needles 1 and 4 and in pattern on needle 2 and 3 until you are approximately 1.5 to 2 inches from the top of your longest toe. (I did 4 repeats plus 4 rounds plain knit before beginning toe decreases.) Decrease 1 st at beginning of Needle 2 in the last round. 64 sts (16, 16, 16, 16) 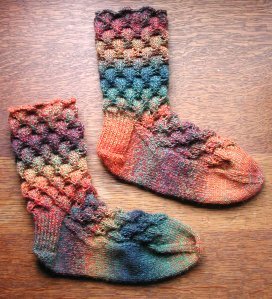 Continue in this manner until you have 24 stitches remaining. Knit to the end of Needle 1. Arrange top and bottom of toe on 2 needles. Slip second stitch on each end of each needle over the first stitch. (20 sts total.) Graft toe closed. Finish off beginning tail. Wash and block socks. The pattern stitches have a lot of bubbly texture but most of it blocks out. It doesn’t show when it’s on the foot anyway.

Those are very, very nice socks. Very nice job and I like the yarn colours as well.

Those are great Socks Louisa!