Is it possible to have too much stuff? I didn’t used to think so but I’m starting to change my mind. I think you can have too much stuff if it doesn’t fit in the available space. And if it’s spilling out all over the place. And if it’s getting disarranged and dirty because you don’t have time to clean or tidy it all. I don’t think I’m quite there yet, but I’m thinking that might be a place I don’t want to get to at all. I really do love my stuff (books, magazine, art and craft supplies etc.) but I don’t want it to drown me in its copiousness. And if you think about it, I really do have a limited time in which to do anything with it all. 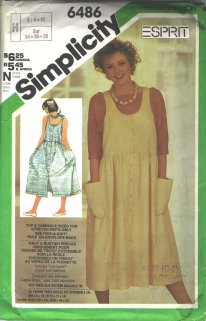 I was reading a blog where somebody was discussing how she didn’t like to own too much stuff. It makes her uncomfortable and unhappy, so she regularly clears out and gets rid of the extraneous stuff. I do that occasionally with clothing or other household junk (mostly dead appliances) but not with craft stuff. The minute after I got rid of it, I’d want to use it. Even clothing doesn’t get chucked out unless it’s worn out, really ugly on me, or totally out of style. When I gained weight about 10 years ago, I put a bunch of clothes away that didn’t fit. I didn’t give them away to the Sally Ann but stashed ’em in my copious attic. Now I’m wearing some of that clothing again. Since I’m never really IN style, my clothes don’t go OUT of style very easily. As a matter of fact I wore my 22-year-old jumper yesterday! I sewed it from this 1984 pattern using a soft faded blue cotton twill — lighter than denim but similar. It was loose on me when I was in my mid-30’s, a little tight in my late-40’s and back to fitting perfectly in my mid-50’s. Gotta love something with that much longevity! It’s in the wash today and tomorrow I’m wearing my blouse I sewed from a 1985 pattern.

In a way I guess I can have more stuff than some people because I have space to put it and ways to organise it. Well, it starts out organised anyway! I’ve been meaning to get into my attic spaces and sort stuff out again. They get kind of mixed up and tossed around when I’m looking for something. Invariably I’m in a hurry or in the throes of creativity and don’t put everything back the way it was. I actually enjoy that kind of tidying because I get reminded about things I’ve forgotten about. And it always feels good to know everything is sorted out and cleaned up. I have to do it before it gets too hot out however because the attics become like a very close oven in summer. Then it’s not fun at all to crawl around in there with no air. Hey, maybe I’ll start today! My technique is to start with the easiest space (the spinning equipment one) and progress through the next-easiest (the spinning supplies) and the next-hardest (with the sewing and paper supplies) to the hardest (the miscellaneous family junk one). If I don’t start very soon it’ll be too late. 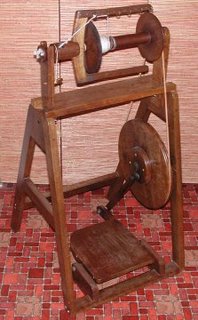 Speaking of things in the attic, I got inspired to drag out one of The Twins. I'd love it if anyone knows the maker of this wheel. Because I have 2 of them from different sources I suspect they were either made locally (Greater Vancouver/Vancouver Island) or commonly available (local dealer). Probably the former since I don't remember seeing another anywhere around. I also don't know how old they are though I suspect late '70's or maybe even early '80's. Paula Simmons didn’t include it in her 1977 book Spinning and Weaving with Wool where she pictures most of the wheels commonly available at the time and she’s a relatively local spinner so she should have been aware of it. I've had them for about 5 years maybe? The original owners didn't know or remember any details and one has since passed away in her 90's.

This is a sturdy cottage-style wheel with one large bobbin, bobbin-driven, 2 ratios, single treadle. The mother-of-all slides up or down to change ratios and fastens with wingnuts inside the frame. The spinner sits to the side of the wheel to treadle and spins at right angles to the orifice. The drive band is leather and the wheel is nicely built and finished with a dark oil stain. The two I have are identical in every way. I can't find any maker's stamp or logo. Personal rant: why don't many makers sign their work? I should probably sell one of them at least, since it’s kind of redundant to have two identical wheels that I rarely use taking up space. I’ll keep one to use for spinning very thick or funky yarns that don’t work on either of my other two wheels.

Oh yeah, I had a lovely Mother’s Day! Even though it wasn’t exactly too relaxing, we had 4 generations together and a total of 5 moms: birth-mother, 2 of my sisters, me and my daughter-in-law. Plus lots of grown-up kids and Significant Others, plus my granddaughter, a large dog and a small kitten. It was definitely a party — the weather was warm and sunny, the food was great, and the company was convivial! The only downside was this was my first Mother’s Day since my adopted mom died and I missed her yesterday. I love my birth-mom very much, but I don’t have the same history with her as the mom who brought me up. I am happy that she’s gone to her final rest though. It was a very difficult last 5-or-so years of her life in so many ways. Stuff happens, eh?

Hello Louisa, Tina here from the bead group.
I just had to pop in and tell you how excited I was to see the spinning wheel on your site. It looks lovely. Not that I know anything about them ; )
Karen was poking around and told me to come and look ; ) As I am just starting to explore the world of spinning. I have not even seen it done, but am ever so curious and dream of doing it myself some day. I have joined the spinners guild here in hopes of witnessing it and getting some much needed info and support.
From the sounds of it, you don't spin often. Do you not enjoy it?
Is it cumbersome? Is it hard to learn? Did you take classes? What can you tell me about it?

If you wish to chat about it at all please email me.