Thanks To Queen Victoria

Canada is celebrating Her Late Majesty's birthday today with a late spring holiday. Unfortunately it’s raining and T-Man had to work. Plus his mom is in the hospital. So nobody around here feels much like throwing a party for a dead queen. Too bad because it might have been a nice excuse to exercise the new barbeque. At least the garden is enjoying a good watering.

It seems to have been awhile since I’ve had a chance to post a blog. Thursday was a Guild meeting with an interesting presentation on weaving with a computer-controlled jacquard loom. No I don’t want something that costs about 3 of my MINI Coopers but it is very intriguing to see the almost photographic effects that an artist/weaver can get with just threads. The jacquard loom lifts each thread individually so one can use different weave structures to get the effect of tones on a black and white warp or, on a multicoloured warp, different areas of colour and texture. It turns out that there are two of these very specialized hand looms in my local area and several more people with enough experience and training to use them. You’d have to be pretty dedicated to get into this area of weaving for sure.

Then it was Friday, when a friend came over to play in my dye studio. She worked while I chatted and showed her where stuff was but I got my Pomatomus sock yarn painted. 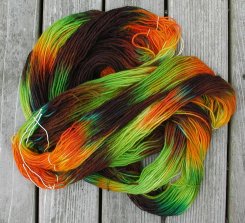 On Saturday we went for a long walk downtown. The weather was nice but not too hot, some wind and the sun playing hide and seek. Picked up some tea and coffee at Murchie’s, the usual pocketbooks and magazines at Chapter’s, and a new harmonica for the T-Man at Lee’s Music. We had lunch at the sushi restaurant with the boats again which is always kind of fun. Then we walked home. Thoughts of relaxing on the deck with a cider or a beer and perusing our purchases were the only things that got us across the bridge and up the hill! We could have hopped the bus, but where’s the challenge in that?

Yesterday we worked in the garden and got some of the stuff planted and rearranged. My greenhouse is now stuffed to the gills with tomatoes (up to my knees!), eggplants, peppers, a few cukes, and some basil. I hope the rest of the cukes and the squashes (zucchini and pattypans) aren’t drowning in the rain we’re having. My water barrels are filling up again after I just about emptied them over the last few weeks of watering.

I had to post a progress photo of my Celestial Moon Beaded Art Doll, Mu Ni, on the Yahoogroup website so I thought I’d put her on here too. I’ve almost finished her front side except her arms and a bit of her skirt. Here she’s “chillaxing” on my Kong coleus in front of the water garden. 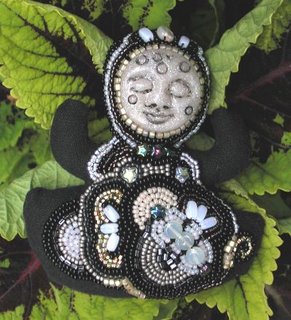 I’ve also been plowing away at my Lace Leaf Socks which are both almost up to the toe decreases. It took a bit of fiddling to get the lace to work out on the top of the foot with plain knit on the bottom. I had to add one stitch on the right side and change the last double decrease to a SSK on the right at the beginning of the lace row and a K2tog on the left at the end of it. I’ll be writing up the pattern to post with the finished socks. I’m actually quite proud of my design accomplishment on these.