Somehow the weekends are always busy. It’s hard to post a blog entry when I’m running around doing stuff. It’s usually much quieter during the week. So where were we? Oh yeah, Saturday. That was too long ago so I can hardly remember what I did! Ummm…plant the rest of my flowers in the front garden. Right. That took the better part of the day and the bugs may eat them, but at least they’re in. They were very potbound from having to sit on my deck and wait for the garden to be ready for them or for us to be ready or for the weather to cooperate. As it was, it got very dark and rained on us a bit before we’d finished.

Yesterday was Father’s Day. Since neither T-Man nor I have a father left on earth, we went over to our Darling Daughter’s for dinner with all the offspring. Unfortunately T-Man’s mom wasn’t feeling up to coming. She’s been under the weather for weeks and the docs aren’t really able to pin down the exact problem. Nothing they’ve tried has worked and none of the tests have shown anything unusual. She’s usually feeling pretty chipper at 78 so this is rather unnerving for us all. Anyway we had a nice little hamburger barbeque without her presence and a good visit with our kids, played with our granddaughter, and got home in time for our 9 pm bedtime. That sounds early but try getting up at 5 am if you go to bed late!

Today was the first of my several fillings at The Dentist. It turned out that my son and daughter-in-law had appointments on the same day just before mine was scheduled. (Yes, most of the family including moms, aunts and cousins goes to the same dentist! Yes, he’s that good.) So they gave me a ride there which was nice. However, I ended up babysitting my granddaughter and getting the freezing and even part of my filling with her sitting on my prone lap! She didn’t want to go sit with either of her parents but wanted to stay with me for some reason. She was very good (remember, she’s not yet 2) and sat quietly playing with some little toys, watching the dentist, and sucking her thumb until her dad was finished getting his teeth cleaned. The dentist and his assistant were very cool about having her there, though he made sure I was holding on to her shirt in case she made a dive for the floor. He didn’t want me to jerk while he had the drill in my mouth! It certainly is an interesting way to take my attention off what he was doing while I concentrated on my granddaughter but I wouldn’t expect it would work out so well if we tried it again. I think they need to take their appointments sequentially or make sure I’m available to babysit next time! I'm pooped.

So first up is the T-Man’s grey socks that I finished the day before Father’s Day. They weren’t dry yet from their inaugural wash so he didn’t get to wear them. Here’s the scoop: 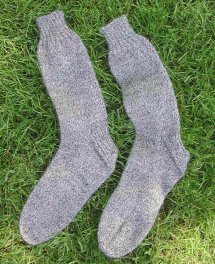 On Sunday I needed something to work on in the car on the way to DD’s so I started some plain socks in Regia 4 ply. I’m calling them Sea Socks because I really like the colours in this yarn: greens, a bit of blue, and white. It reminds me of the ocean with whitecaps. They’re pretty true in this photo even though I used the flash. 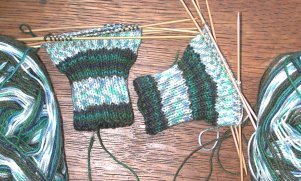 Then today I started another pair of socks for T-Man, though there’s not enough yet to show off. He’s liking having handknit socks so I’m going to indulge him. This will be his first pair of self-patterning socks in ONline Supersocke 100, Sierra-Effekt. It does remind me of mountains (sierra) so it’s aptly named. The colours are browns/dull yellow, plus black & white. I did find one knot in the 100 gram ball though and it didn’t join up properly after the knot. I cut out the excess, about 2 m of black & white, and I’m hoping it will be ok after that. I was warned that ONline isn’t as well-made as some of the other printed yarns and I can see that there are spots of black or white in the coloured areas etc. I didn’t pay full price for this ball though. It was marked $9.97, regular 16.99, so I’m not going to complain too loudly. On the other hand I think I’ll stick with Confetti and Sisu with the occasional more expensive Regia thrown in. They are much better quality yarns.

Don’t worry, I haven’t given up my Pomatomus Socks. I just need to have something that I can work on while doing other things. Pomatomus ain’t it unfortunately! I need to concentrate carefully while I knit them. I think that trying to do other things is what got me into trouble with my Jaywalkers. Yes, I will get back to those too when I’ve re-dyed their yarn. I’m not heartbroken about frogging them. It’s the process that counts.