I was going to start another project but I controlled myself. For the moment anyway. I have a Finished Object to report — my Lichen Shell is done! Here’s the scoop: 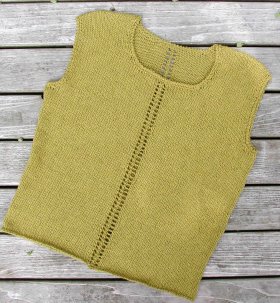 Pattern: Original was in Knit’n’Style, Issue 143, Spring ’06, p. 33. I adapted it to circular knitting and substituted the yarn.

Cast on 151 sts with size 9 needle tips, placing markers after 75 and 150th sts. (I knit first and last sts together to make the 150 I should have had and to join work into a circle.) *Knit 36, work ajoure pattern, k to marker, rep from *. Work ajoure pattern over centre 3 st front and back throughout. Knit, inc 1 st each side of markers every 12th round 6 times. 87 sts between markers. Knit even until piece measures 11-1/2” from cast-on edge.

Shape armholes (circular knitting will now divide into front and back, back and forth knitting; join another ball of yarn when necessary): BO at each armhole edge at beg of EOR: 3 st once, 2 sts once, 1 st twice. (Work ssk on knit side and p2tog on purl side for single dec.) 73 st on each of front and back. Work even until armholes are 4” high, end with WSR. Continue even on back. Shape front neck: k 26, BO 21 sts, k 26. Work both sides (and back) at the same time and join on new yarn end for second shoulder side. BO at each neck edge EOR: 2 sts once, 1 st 3 times. Continue even until 7” from armhole edge. Shape back neck: k 25, BO centre 23 sts, k 25. Work all 4 sections at the same time and join in new yarn end. BO at each back neck edge at beg of EOR: 2 sts once. Then BO 2 sts at each back neck edge and at the same time BO 7 sts at the armhole edge on all 4 sections. Then BO 7 sts at armhole edge twice more.

Finishing: Graft shoulders together. Sew in all loose ends. Crochet 1 round sc around armholes and neck decreasing slightly to ease in. Approx. 1 st EOR on vertical edges and almost st for st on horizontals. Round 2, reverse sc (crab stitch) around easing a little in the inside corners to lie flat (dec 1 or 2 sts). Finish off loose ends. Wash and block sweater.

Comments: I started with a swatch in the burgundy colour of the same yarn because I wasn’t sure if I had enough to waste. Birkeland Bros. didn’t have any more of the lichen colour. I was testing to see which of 3 different ways to do a double decrease looked best. I tried the centred one (sl 2 knitwise tog, knit 1, p2sso), the usual one (sl 1, k2tog, psso), and just plain old k3tog. I liked the middle one best and T-Man did too when I asked him. It has more of a corded look than the other two and had more definition. The centred decrease looked neat but ho-hum and the k3tog looked a bit messy. I also wanted to see if the bottom hem curls because it has no ribbing (it doesn’t seem to) and to test what the crab stitch looks like (needed a smaller hook than the 4 mm I used).

I used most of the 5 balls but definitely had enough yarn. This stuff is splitty and shows every little blip. It consists of four 2-plies (one ply wool/one ply cotton) cabled together. It feels nice though, drapey but not limp. I was somewhat inconsistent with the lifted make-1 that I used to increase on the sides and it shows more than I’d hoped. Guess I should have swatched this too, huh? The pattern called for just the row of reverse sc (crab st) to finish the edges but I had more success with working a row of regular sc first. I have more control over going forward than backwards and it looked much neater. This made the shoulders slightly wider, like a little bit of cap sleeve. But it also curls in much less than the picture in the magazine. The sweater stretched a little longer when I washed it but shrunk back up when dry. Washing evened out the stitches somewhat but my tension is woefully uneven and somewhat loose! I’m definitely not used to knitting with regular commercial yarns. The shell fits well though. Hopefully it won’t be too hot to wear comfortably. 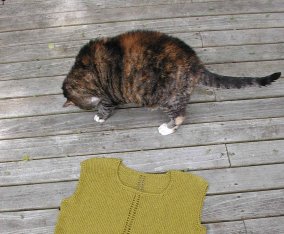 Ms Polly kept getting into every photo I tried to take but only as a blur or a body part! Nobody was available to take the picture on me so it’s on the deck.

Now I can concentrate on the Pomatomus Socks which have a deadline of Fall. I should be able to make that one. Just. I don’t have 2 sets of the same right-sized needles to work my usual two-socks-alternating, but I have a set of Brittany birch and a set of Clover Takumi dpns. So I’m using a combination of each set so that the differences, if any, are spread around. I can’t do my usual mindless knitting on these anyway. They’re a lacey pattern in twisted k1/p1 rib and need a lot of concentration. That’s where my favourite podcasts come in. I need to do a post on those one of these days. There’s some good ones out there: some old, some new. I've mostly stopped listening to the actual radio.

I also have to write up one of my beaded art dolls (will it be Lady O, Ulva the Mermaid, or the not-yet-finished Mu Ni?) for my Complex Weavers Beads & Interlacements study group. I have a couple of weeks. Just. It's the same deadline as Mu Ni needs to be completed: July 1st. Maybe she’ll be the one I document? There’s only 2 stitches on her which should simplify diagramming things. Not like Ulva’s fly stitch scales and branched fringe seaweed belt plus back stitch and the wigging technique I used on her hair. She’s not completely covered in beads like the other two dolls but she has her own complex allure! Mu Ni isn’t quite done yet however. I’m working on her every day, but only a little at a time.