Another Week in Summer

My weeks actually begin on Monday. Though for some reason I can’t make visual sense of a calendar if the weeks begin on Monday, like the French ones do. I always think of Monday as the beginning anyway, which I guess makes Sunday the last day of the week? Since it’s actually a continuous spiral in time, I guess it doesn’t really matter. In any case, Monday is the day I catch up on all the things I didn’t have time to do on the weekends, which are often full of family concerns or shopping or marathon walks with T-Man and don’t leave much time for email or blog posts. Or making the bed or laundry either, come to think of it.

Saturday was Dye Day with Darling Daughter and her Friend. We did a number of skeins of sock yarn and they both dye-painted some roving for spinning. Of course I get sucked into knitting one of DD’s pairs of socks with her friend’s mom getting the other one. You don’t think she was going to knit her own do you? Even if she does know how, she has never actually finished even one sock. Not to worry, I’ll try to have them done by her birthday in September. Since I’ll actually be away on holiday at the time, that will give me extra time to finish them! Nice extra-bright colours, see? 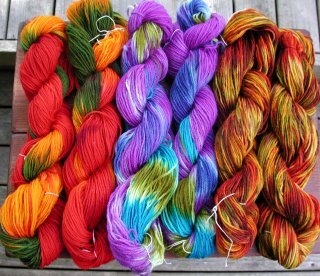 The 2 skeins on the left in red/orange/green are DD’s (Ha! Fooled ya! Bet you thought they were my colours, didn’t ya?) The middle ones in purple/turquoise/olive are my attempt to not make my usual fall colours and the right-most skeins are an over-painting in red and brown of my former Jaywalker socks yarn. Hopefully the Jaywalkers will look better now. Originally they were dyed in the ball causing the inside of the ball to be a pale version of the outside of the ball and for both balls not to match in any way. They have been bumped farther down on the NIL (Next-In-Line) list because I have several other things I want to do first. I’ll probably be the last person in the world to knit my first pair of Grumperina’s Jaywalkers, but that doesn’t bother me. I never was one to follow the crowd anyhow.

Meanwhile my Sea Socks are almost up to the toe decreases which is farther along than the Pomatomus socks which aren’t even up to the heel flaps yet. See, I just can’t work on anything that takes concentration. I must have my “mindless” socks to knit on which means they get done first. After they’re done I will be starting an Anonymous Project, which I won’t mention until it’s completed and gifted to its intended recipient. One hint, I’ll need the needles from the Sea Socks for it.

Speaking of those #&^$* needles (my 2 sets of Addi Natura bamboo dpns) — I’ve managed to misplace one of them. I’ve looked everywhere! No skinny little bamboo needle anywhere to be found. You’d think carrying them around in my decoupaged lunchbox would help keep everything together in one place, wouldn’t ya? So where did the darn thing go? Wait! I haven’t searched my backpack yet! There’s hope. Meanwhile I made a spare from a bamboo sate stick. Lots of sanding and a rubdown with waxed paper and it’s as good as any of the $13 (Canadian) per set Addis. Hmmm… However, I’ve only got a couple of these particular sticks left. The new ones are much thicker, more like a 3mm than a 2mm. That’s an awful lot of sanding to get it down small enough. Besides, if I have too many sets of sock needles, I’ll have too many pairs going at once. I need to keep them under some kind of control. Somehow. Ha.

Just noticed your beautiful pattern for lace Leaf sock. Printed it out and put it in the line up for the "next" project. Thanks for sharing. Maureen in Nanaimo. PS I avoid vacuuming also.

Look into the middle of your ball of wool - sometimes needles disappear into them . . . and you might try bamboo skewers for needles. Watch out for the unribbed ones - usually in chinese grocery stores & they're mostly 2.5 or 2.25mm before sanding. I haven't splintered one yet!!