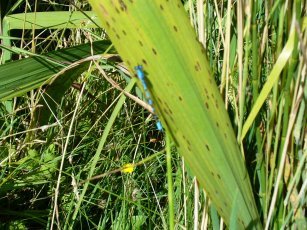 OK, that’s a boy damselfly, not me. I admit it. T-Man took this somewhat blurry picture (we’re still learning my new digicam) while at my uncle’s place on Camano Island. (I'm thinking T has a thing for bugs, hey?) We had to go down to Washington State on Tuesday to my aunt’s funeral. I did mention that she’d passed away last Thursday. It was a simple graveside service by the local Catholic priest. My aunt was Catholic though my uncle is not. But he gamely went and spoke to the priest himself to get him to come and say a few words. Funerals are about the person who died, but they’re also for the rest of us left behind. Gotta kind of cover all the important bases.

We had a nice visit with the small group of family and friends and went for a walk with my cousins to Lost Lake near my uncle’s cabin. It’s really too small to be a house! When my aunt and uncle were snowbirds, they’d spend summers there on Camano and winters in southern Arizona. Quite the climactic difference, huh? Several years ago my aunt became too ill to go back and forth so they stayed in WA where family and doctors were located. In the last while she was in a care home nearby. Camano is an island you can drive to over a short bridge and not a lot of people, even as close as Seattle have heard of it. It’s quite big though there’s no actual town on it. Stanwood which is famous for Dale Chihuly’s Pilchuck glass school is just on the mainland side of the bridge. Here’s what part of Lost Lake looks like near my uncle’s: 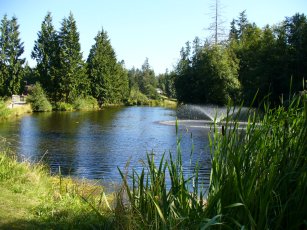 So we only went down for the day and had dinner on the way home at a restaurant in Fairhaven (historic part of Bellingham), called the Big Fat Fish. I think it’s rather new and it was semi-pricey but good. Noisy though! Brick walls, windows and open ceilings made it sound like we were inside a garage. I didn’t take off my hearing aids though. I’m so brave! We got home just after our usual 9 pm bedtime so that wasn’t too bad. It was a long and tiring day though. My family was glad we came and we were too. Support is needed in times of loss.

Yesterday and today (and likely tomorrow too) I checked off new inventory at my LYS. They bought the stock from the retiring Hannelore at Sun Bench Fibres and are attempting to incorporate it into the shop. Aaakk…there’s no room! But it’ll be nice to have somewhere close by to pick up a tube of 8/2 cotton yarn or whatever. There’s no walk-in type weaving supply store anywhere in the Lower Mainland any more. Only home-based businesses where you need to mail order or make an appointment to visit or knitting shops that may have a few cones or tubes of weaving yarn. I could get to like having more supplies in my neighbourhood. Might inspire me to weave again. Though I’m going to have to teach them a few weaving terms and discuss how to use some of the stuff so they’ll know a bit more about what they’ve got! That’s kind of how I got sucked…er, requested to help because I’ve been a weaver for over 25 years and I know what I’m lookin’ at. Well, unless it’s some detached doohickey with screws and stuff and no hints as to what it might belong to…

And, just because this is MY blog so I can do what I want to, I have to say I finally met my Anonymous commenter in person! Hiya Julie! She’s a sweetie and I’ve gotta boast about her. She used my sock pattern to really learn how to knit socks. Too cool, eh? She’s made some nice ‘uns too. Hopefully the first of many.

Yippee! There's going to be weaving stuff at Birkeland Bros?!?! That's awesome. Is it there, already, Louisa? I need to pick up some 8/2 cotton =)

Thanks for helping out and explaining what's what. Great you found a few things too.

heya louisa!! my socks ARE coming along nicely, thanks to your fabulous sock recipe. have a wonderful holiday!!