The weather was cool and cloudy in the morning but warmed up as the sun peeked out in the afternoon. Here’s all the gang that could make it: 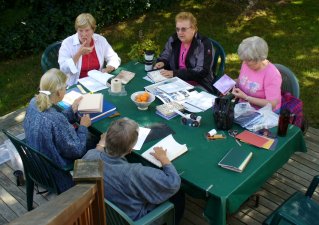 Clockwise from bottom: Jo Anne, Kirsten, Cathie, Sandra, and Donna. I was taking the picture, of course, and we were unfortunately missing Masami and Chisako who had work to do. Look at the serious expressions on everybody’s faces! They’re concentrating really hard on getting the Coptic stitching right on their books. We each did a lot of the prep work ahead of time at home, which included cutting and gluing the covers, trimming the pages and folding the signatures. Some had even done the piercing and were all ready to go. It still took us most of the day to do the stitching, not including a prolonged potluck lunch break! (T-Man enjoyed that part.) This was one time-consuming book. I think it would get easier if we did it often, but the last time we tried was a couple of months ago and we had an instructor who knew what she was doing. I was fine after I got started but got a bit boggled at the end after everybody had left. The last signature and the back cover go on at the same time and I had somehow missed putting a thread under instead of over so the cover was wobbly. It was fighting me all the way, but I eventually got it subdued! Then I stitched on the buttons and knotted the tie, adding 3 glass leaves to the end of it for decoration. And here’s the finished journal: 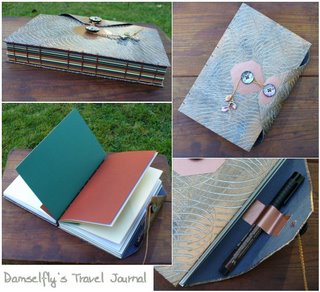 The size is half of a regular sheet of paper because that’s what I used for many of my pages. Now I’m going to go paint and stamp into it randomly so it’s not all pristine. That way I might be able to get over my fear of writing in it! I hope.

What else? Oh yeah. I finished taking the pictures for the grafting tutorial but I don’t have time to write it up today because Ms. Polly has to go visit the vet. Poor baby has some kind of kitty bug, like a bad cold. Hopefully it’s just something that antibiotics will clear up. She’s an elderly cat and we’re going away in a couple of weeks. Don’t want to leave Darling Daughter with a sick kitty to worry about. Anyway, the DIL’s birthday socks are done in plenty of time even though we’ll be away on her day. Hopefully we’ll see her before we go so I can give them to her. We will miss DD’s birthday too. I may or may not get her socks done before we go but I doubt I’ll get them done before we get together next Saturday. Her sweetie’s socks will be done though — I’m up to the gussets on them. Whew! Too many socks, too little knitting time!

The weather has been very nice for the past few days, sunny with a few clouds but not too hot. Perfecto. Hope it keeps up. I'm off to do a bit of painting in my journal.