Or Journal Traveling? Something like that. I’ve never actually kept up any journal I’ve ever started before. This was a true first in many ways. Maybe it was because I made my journal myself — though I’ve never been able to write in any book that I’ve made previously. Maybe it was because I had already “messed up” a lot of the pages before I left so that I wouldn’t feel intimidated by blank paper. Or maybe it was just the habit formed by writing this here blog. I dunno but it worked! Here’s some of the pages in it: 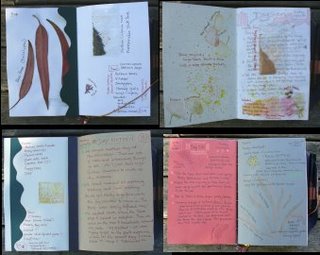 I filled up 2 or more (up to 5 or 6) pages every single day I was away. Even then there’s still more than half the journal left. (For the next vacation?) I had brought a “journal kit” with me that included pencil crayons, gel pens, glue, stamp pads, some hand-cut stamps and a sheet of stamp rubber plus a craft knife and v-cutter. I designed and cut several new stamps as I went, inspired by things around me, mostly leaves. I do have a thing for leaf shapes! I glued things into the pages: leaves, rocks, a pressed flower, a shell, apple seeds, even a couple of little ziplock baggies of sand. My version of “ephemera” since I didn’t have any bus tickets, museum passes, candy wrappers or other more regular ephemera items. Guess I’m more of a natural kind of woman! Though I did include a dog tag I found in the campsite in the photo from the last post. I also stitched ball bands in with the yarn they came from. I poked pine needles through slits cut into the paper. I had a blast!

A lot of the inspiration for my journal came from two books by Gwen Diehn: The Decorated Page and The Decorated Journal. Even though I don’t draw like the examples in her books, her writing somehow spoke to me and convinced me that just doing it was the important thing. Not to worry about cockling the pages or making a wrong line or messy writing — just put what I want in the pages in my own way. It doesn’t have to be perfect or great art or immortal words or anything like that. It’s mine and who cares what anyone else thinks! As long as it expresses what I want it to, then it’s just fine. And somehow it is. I’m still adding to it and going back and doing more to what’s there already. Now I’m wishing that I’d saved space for printouts of the photos I took. And that I’d brought a small set of watercolours with me. Next time. Next book?

Speaking of rubber stamps, I love cutting my own. I love the funkiness and the imperfections. It makes commercial stamps seem rather, well, trite and overly detailed and too nice. Somebody else’s, not mine. If I cut my own, I don’t have to give anybody else credit. I’m not breaking any copyrights. I’m speaking my own language, making my own marks. They even look good when the impression is sloppy and as a bonus they work well on fabric because they’re relatively simple. I made a stamp from this petroglyph that I photographed in Capitol Reef. They have lots of wonderful petroglyphs there carved by the native people thousands of years ago. And some carved by the Mormon settlers a hundred years ago. And a few made by modern folks that just can’t help themselves, though if caught they get a really big fine! 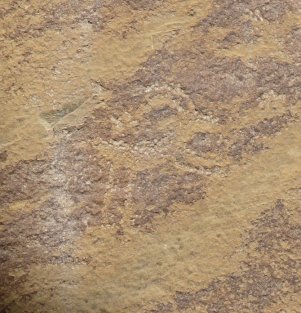 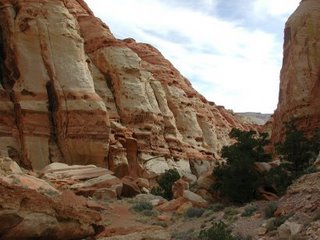 Yes, there’s a trail right there. Amazing, eh? We had to climb up a really steep switchback trail from the campsite to get up there and then we walked between the walls of the canyon for a mile or so and then down another bunch of switchbacks to the highway and the beginning of yet another cool trail. Well, hot actually! And then just down the highway were the petroglyphs with a nice convenient boardwalk to view them from. And an apple from one of the Fruita orchards to munch on back at camp. What more does one need for artistic stimulation, I ask you?