I finally got to play with my dear little granddaughter all by myself yesterday while her parents went to a movie. She was such fun as only 2-year-olds can be! We played with Granny’s toys for awhile — she knows the cupboard where they’re kept and wiggles the handle saying “Opie, opie” until I open it for her. Most of the toys were brought out but not all were played with. I think she’s outgrowing a few of them now, but her impending baby brother will get his chance eventually. Some of these things are older than their daddy! Later we went to the nearby park that has play apparatus geared just for little ones. Nobody else was there so we had it all to ourselves. The big hit was digging up a dish full of gravel and hauling it up the steps to the slide. It made a lovely racket as it was chucked down the slide and then she followed it down and started all over again with the shovel. This visit I noticed that they’ve added a wee bit of brightly coloured gravel to the plain old rocks. Sorting out the blue and red and yellow pebbles and lining them up took up some more time. Then it started to rain so we headed over to my LYS which was closer than home. My “boss”, the owner, was in and had a good cuddle with DGD while I swapped 2 balls of yarn for 2 other balls of yarn. She wants a little one of her own but so far it hasn’t happened but I’m willing to lend. It was really cute when DGD waved and repeated “G-bye!” on the way out.

I’m nearly halfway up the back of the Little Squares Sweater. I’m going to go until I run out of the last ball of handspun before I spin up any more. I have a wee little bit of the singles still on the spindle but I’m assuming I’ll need at least one more small-to-medium-sized ball before I’m done. I just don’t want to have a lot of leftovers in case I’d rather do something different with the rest of the fibre. There’s about 200g left at this point. I was so nervous about running out of the ribbon yarn that I bought way too much. I’ll probably have more than 4 balls left when I’m done, even after crocheting around the collar/fronts. Oh well, that’s better than running out and not being able to get any more! I’ll just have to do something else with it.

That sweater needs to get done so I can go on to other things. The projects are starting to line up! Poor Pomatomus socks are stuck, as are the Ribby socks and the Peapod sweater. I want to do a lace shawl with a gorgeous skein of cashmere/merino laceweight that’s teasing me. I think it’ll be this one from Interweave Knits Fall 06 issue. I’ve got an ancient cone of brown cabled merino fingering weight that wants to become this lovely lace cardi by Laura Chau (cosmicpluto) from Knitty.com. And before I start any of those new projects, I want to make a partly crocheted/partly knitted cardigan sweater from some handspun that’s been kicking around the studio. I’ll be designing this one myself so there’ll be more on this later as I swatch and calculate.

I got Interweave Knits new Holiday issue the other day and several of the patterns are giving me déjà vu, especially the already-available-as-free-PDF Heart Sachets which I made last December. Why would I willingly spend money on it a year later? The bag by Nicky Epstein also seems familiar but I’m not sure if it’s the same or a variation on several of her patterns that have been published recently. I do like the pears on the cover though. They would look cool in a handturned wooden bowl on the table. If you’re sick of socks, do check out Interweave’s glove gallery for some “handy” inspiration. I’m becoming a big fan of handwarmers especially if I can still type and knit with them on. Right now I think I need them. I’m freezing!

Oh wait. We need pictures. This here blog has been pretty boring of late with all text and no eye-candy. This is kind of how it feels here today, though this was taken on our holiday and is actually the edge of Cleome Lake near Fort Bragg, CA. 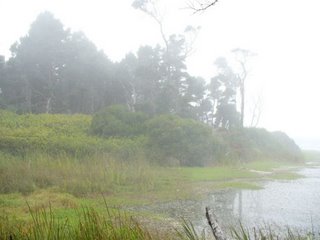 And this is what we call the Hobbit Forest, on the trail to the beach at Washburne State Park on the Oregon coast. It’s all dark and mossy and mushroom-y. This park really does have a trail called the Hobbit Trail but this isn’t it. 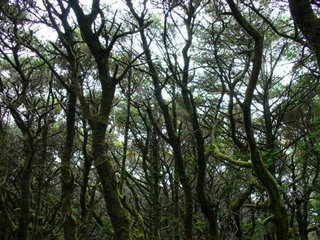