I still have a bunch of UFOs of course but every time I finish something I feel like I now have a license to start another. I had some of the black/fall coloured handspun fingering weight yarn left from the NSGS cardi and I had seen a set of wrist warmers in the Arctic Lace book that I wanted to try called Fish Trap. Heaven knows it’s been cold enough around here to need wrist warmers (or warmers of any description actually)! Of course I also wanted to add beads to it which was just the complication that boggled my little tiny brain. My big mistake was starting on this last night when I was tired and trying to watch TV at the same time. Hah. I frogged it once last night and then twice more this morning until I had a “doh!” moment. Now it’s coming out ok.

Let’s back up a bit. I had these beads in a lovely transparent bronze AB (aurora borealis, an iridescent bead finish) size 6°. I bought a hank of them when I was at Shipwreck Beads on my September vacation and they just happened to work nicely with the yarn. I had a bit of a problem getting them on the yarn until I remembered a trick I had read about recently. One thing I love about Czech beads — they come threaded in hanks. You glue the end of the thread from one strand of the hank alongside about 2 inches of the yarn. Moosh the glue in well, shape so it looks like a single thread and let dry. Now you can slide the beads over the join onto the yarn. This way the beads don't have to go over a doubled yarn or a knot.

The next problem I had was starting off by casting on with a long-tail cast-on like I usually use. The directions said knit 6 rows of garter stitch in the round which of course is knit one row, purl one row. Unfortunately the long-tail cast-on is also equivalent to a knit row so if you start in the round with a knit row you get 2 knit rows together, aka plain knit, not garter. It looked wrong. Frogged that and started again with the purl row first. Much better and the 6 rows end with a knit row which is a good foundation for the first row of lace pattern.

That’s where another problem showed up. The Fish Trap pattern is a simple diagonal of eyelets and since I wanted to put beads in, I attempted to add them in the middle of the solid area. Of course that wasn’t going to be symmetrical because there’s 4 stitches there. OK I can live with that. I used the bead technique where you bring up a bead, yarn forward, slip the next stitch purlwise, yarn back. The bead sits on the strand of yarn in front of the slipped stitch. On the next row you just knit it normally. Otherwise you can’t make the bead stay on the front unless you put it between 2 purl stitches and I didn’t really want the purl bumps. The technique I used looked the way I wanted it to. One thing worked right!

But then I had yet another problem. I was putting the beads in every 3rd pattern round. Actually I was only knitting pattern rounds. And it wasn’t looking right. Did I make a mistake in following the chart? When knitting lace on dpns, it’s a bit tricky when you have to work a k2tog-tbl across 2 needles or do a yarn over right at the end or beginning of a needle. Nope, I got the pattern right. Except I forgot one thing: the plain round in between pattern rounds. The chart just shows the pattern rounds and the only clue the plain rounds are missing is the numbering up the right side: 1, 3, 5, 7, etc. The even numbered rounds are the plain ones. Oops. Back to the frog pond.

By this time, the yarn was starting to look a little fuzzy. As was my brain. Hey, maybe if I do the beads on every other plain round. Then I wouldn’t have to juggle pattern and beads at the same time! Novel notion, eh? It works. I could have put beads on every plain round to make them line up closer together, but I kind of wanted them scattered more. This is partially for weight reasons and partially because I didn’t want too much sparkle. These will be practical items for wearing while sitting at the computer. The only thing I’m a bit disappointed with is the lace doesn’t really show up much. It doesn't help that I can’t block them heavily because they wouldn’t fit me if I did. I have very skinny wrists and I already dropped down a needle size to 2.25 mm as it is. Besides, I didn’t really want them too airy. I want warm! I do like this yarn knitted. I've only seen it crocheted before.

Here’s how far I’ve gotten so far. There is no daylight to take this in and I had to manipulate the camera with my left hand so it’s a bit off. Looks like I’m wearing a porcupine, doesn't it? 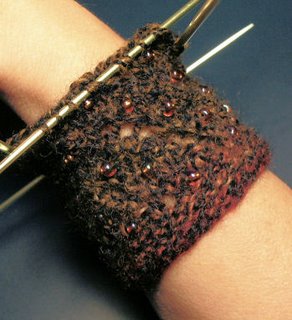 To end off, here is the lovely sunset this evening. The snow is melting. Wahhh! Although we got another few inches last night (which I had to shovel) the temp rose a lot today. But it didn’t rain much at all so that’s a good thing. Even saw the sun for a bit. I still have a thick sheet of ice on my top deck (the one with the semi-frozen water garden on it). It’s stuck solid so I can’t shovel it off and I don’t dare try to break it up because I don’t want to damage the plastic liner. Even my back door mat is embedded in the ice! We’ll just have to wait until it melts and use the basement door instead. And watch out for falling icicles! 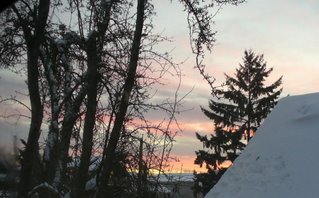