I have Two fronts for my NSGS cardi now. Next I start the back which is the last piece. I have tonnes of the rusty red yarn left. Did I tell you that it’s really vintage stuff: circa 1987! It once was a very oversized pullover vest with embossed (purl) snowflakes that I wore cross-country skiing a lot. It was also bright neon red. So I frogged the whole thing and overdyed the yarn to mellow the colour down. There obviously was lots of yarn in that sweater because I ended up with 5 skeins plus some short ends. I’m only just starting number 3 skein which should be enough to do the back. This is a closely fitted sweater with just enough room under it for a t-shirt. No idea what I’ll do with the last Two skeins but they may become slipper socks. My feet are cold. Or maybe I’ll make a beret. I need a new hat as well. Slipper socks first though.

Speaking of socks, I finished T-Man’s Socka Socks. Two socks to be precise (gotta keep the theme going). I like this colour of yarn. It’s kind of pearly though it looks somewhat bluer in the photo. That’s pair number 5 for the T. Usual pattern, usual 2mm needles. Plain but serviceable. You know how I love to knit plain socks while reading. Which is why I have yet to finish my Pomatomus Socks. Here’s the Socka Socks: 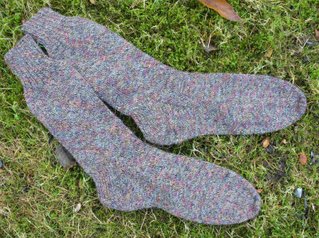 I was going to write more, but T dragged me kicking and screaming (not!) out for a walk quick while it wasn’t raining. There was actually some sun for awhile. We went to our usual Chapters book store then to Steeps for tea. We finally saw the mountains that we haven’t seen for days come out of the clouds, with an icing of snow and the sun shining directly on them. No camera with me. Sniff! By the time we got home it was supper time and dark. The moon was occasionally visible as a thin sliver between clouds. That was pretty too but no photo. So here is the sky from last night’s sunset instead. 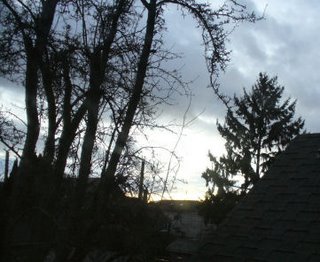 That’s next door’s scary old pear tree on the left there. It is so big and so creaky that I’m always afraid it’s going to come down on our house. So far it has managed to stay upright even in all the wind we’ve had lately. Whew! Who knows what will happen to it when they get the permits to develop the house next door which currently is unoccupied and partially stripped. We shall see.