Whoo-eeee!!! That was Some Storm last night! It’s picking up again now too but not as bad as the 90-100 kph winds we had between 2 and 5 am. We hardly slept with the noise and concerns that the old pear tree next door was going to finally bite it. The yard is littered with twigs and branches but otherwise everything seems undamaged. However, the morning commute for everyone is seriously discombobulated what with a tree on the Skytrain track, power out at the Surrey stations, trolley bus lines down and the Lion’s Gate Bridge closed due to more trees on the causeway. Almost a quarter of a million households are without power but ours barely flickered! T-Man must have power at work though because he didn’t return home after leaving at 5:30am. Are we lucky or what?

I’ve lost count of the storms we’ve been having one after the other. Rain, wind, snow. There’s lots of damage to trees and structures that have been hit by falling trees and branches. We’ve been so lucky that nobody has been killed even though some cars have been hit while moving and nobody uses the four-way-stop procedure properly. I’m betting lots of people will take an extra day off work today. Meanwhile, I don’t have to go anywhere. Neener-neener! I’ll just stay warm and dry and un-windblown and play with Tori.

Speaking of which, I spun up one little skein on her yesterday and Navajo-plied it using the lazy-kate. The bobbins actually hold a fair amount. They’re bigger than the standard Ashford ones and bigger than my old Sleeping Beauty’s bobbins. Not bad for such a teeny wheel! A small squeak developed where the footman joins the right treadle but a little adjustment of the screw there seemed to solve it. This wheel doesn’t really seem to need any lubrication anywhere. Of course the sealed bearings are self-lubing but it’s pretty quiet overall. I did have a little trouble with the lazy-kate which doesn’t have any way to brake the bobbins. They continued to run when I didn’t want them to and allowed too much yarn to escape before I was ready for it. I may glue something under the bobbin rim on the fibreboard base to slow it down just a little, like a piece of fun fur or something. My friend Laura uses this technique to slow the bobbin in her shuttles and it just provides a bit of drag which is all you need. My S-90 doesn’t have this problem because the lazy-kate holds the bobbins upright which provides just enough drag. There is a bit of plastic that will work as a brake if you turn the bobbins with the flat side down or it misses the plastic if you turn them with the stepped side down. The latter is the way I use it because I don’t like too much drag or my arms get too tired or the yarn breaks.

I did one more modification so far as well — I put one of my little red Velcro dots on the end of the dowel that the brake is attached to so that I can park my yarn and it won’t untwist when I let go. I have one in the middle of the bobbin support just under the orifice on Klaas and use it all the time. There is nowhere to easily park your yarn on Tori because her orifice is in the middle of the air with no support on the front. Do other spinners have this problem? Where do you park your yarn when you leave it temporarily? Do you just wrap it around the orifice or something?

I’m almost at the toe on both of my MIL socks. I’m hoping to finish them today so I can check another thing off the never-ending list. Not sure what’s next but I’m sure something will jump up and say “My turn!” Maybe I should finish a few things? Nah. Start. More. 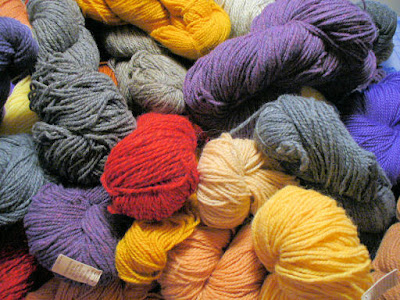 Here’s one of the things I could start — right after I get the languishing boa off the loom. I bought this pile of yarn (50 skeins!) from my friend Sandra who bought it a number of years ago from someone else. This is Condon’s wool from an extinct Charlottetown, PEI, mill and some Briggs & Little wool from Nova Scotia. It makes great blankets, which is what I want for my bed, and also fulls beautifully for knitted hats, slippers and bags. I got to pick at random from her collection (she only held back the white) and though the colours are quite pleasant I can overdye if I need to. The blanket will be underneath so colour really isn’t critical. I already have 2…make that 3…handwoven blankets on my bed now. One is just a little throw that only fits over me, but T doesn’t need it. I’m on the windward side of the bed (nearest the usually open window) and he has his own internal heater. Sometimes our bedroom gets down to 10 degrees Celsius in the night! I like it that way if I have enough blankies on me.

T-Man managed to get the photos from the aquarium off his camera and into my computer. They aren’t very good (too low resolution) but they’re kind of arty! Especially after I messed with them some in Paint Shop Pro. Heh! Next time I’ll remember my own camera. Maybe. 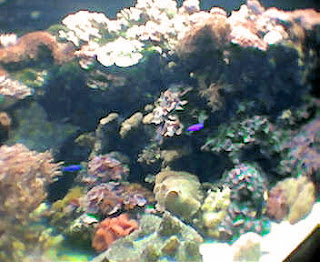 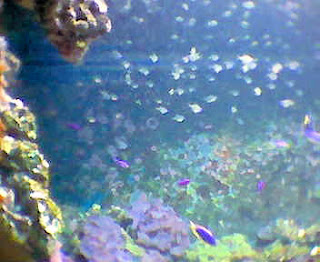 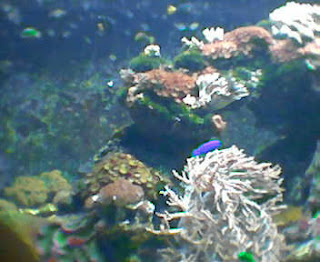 good morning, just thought I would let you know that you do a great blog and it is nice to hear about your horrible weather first hand, I am a beginner weaver and spinner and I was wondering what your woven boa looked liked, I just warped for a merino wool scarf( which I spun myself )but I don't like how it is looking and I don't have a pattern so I am just winging it. If you have a picture of yours that would be great,,,,,,thanks Shirley Mainprize1@telus.net

Hi Damselfly!
Yes, the storm was nasty! Powell River was blasted pretty darn good too. I see there is yet another wind warning.

Parking your yarn: hhmm... I have a Majacraft Rose with the pointy delta orifice and so what I do is to take enough spun yarn and go over to the left of the bobbin and flyer and tuck the yarn up and under the drive band. When I get back, I just give it a tug and I'm back in business. ( and no sticky dots) I'm having trouble with the wheel making clunky noises and a distinct thump when I treadle but Majacraft is sending me replacement footmen. One of the sealed parts is misbehaving.

... and may I say hi to Shirley!! She lives in the Shuswap and is a member of the guild there that I just left. Say hi to everyone for me.
The woven boa was featured in a Handwoven magazine and so if you use the index, you should find it.