Getting a new keyboard on Saturday sparked a whole flurry of fresh activity. We spent a chunk of yesterday reorganising the wires and equipment under my computer desk. Talk about a cable jungle! Yikes! There was a whole herd of dust bunnies hiding in that jungle too. They were wild and vicious! We finally got rid of my old Pentium II that I’d been saving just in case there was still something on there that I needed. If I haven’t looked at it in a year, I can pretty much guarantee I don’t need it. The hard drives were safely wiped before we take it to recycle. My current Pentium 4 will be 2 years old in April I discovered. Even older than I thought, though the letters still shouldn’t have worn off the keyboard yet. We also got a new wireless hub (on sale at less than half price!) and it has the nifty effect of not only connecting both of our computers to the cable modem but also allowing our Palm T/Xs to access the Internet from anywhere in the house and even outside on the deck. This is of limited use because the Palm screen is really small and websites have to be adapted to it but it might come in handy sometime. When I’m lazing around in bed and want to check the weather for instance. Or I could read my email on the deck in summer when it’s too hot up here. Yes, the connection is password protected. We don’t want everybody in the neighbourhood to access our network! We also removed a bunch of stuff I no longer need, like my old Palm cradle (broken) and shortened the phone’s wire (no need to have one that reaches into the next room). It’s still a jungle under there but you don’t need a map to find your way out. The dust bunnies are continuing to breed though.

While we were into spending money, T-Man spoiled himself too by getting a new comfy leather executive computer chair. It replaces the one that’s more than 10 years old and has been reupholstered once and needs it again plus the gas lift is broken. And he also got a joystick so he can fly his airplane on MS Flight Simulator easier than having to use the mouse and keyboard. His old joystick was so far out of date he couldn’t even hook it up to his new computer. He looks so relaxed in his new chair with the joystick on his knee flying away — virtually. Safer than the real thing.

Meanwhile I still have to clean up a bunch of stuff on and around my desk. It’s amazing how things get disorganised so quickly even when there’s only one person using it. That’s my job for this afternoon while T heads for a doctor’s appointment after work. He’s recently been copying my sore neck and tingly fingers and I hope he hasn’t waited too long to get help for it. I’ve been trying to get him to make an appointment with my lovely torturer…er, physio for a couple of months now. She’s right across the way from the doc so he can head straight over there after and book a time. He may have to go get an x-ray too. We’ll see. It’s repetitive stress from work for sure since it was much better while we were away on vacation. How to fix it is the problem since he’s not likely to change jobs. He’s already tried to rearrange his chair/armrests/desk/keyboard into a more comfortable configuration but it’s not helping.

Before I forget, I have a Finished Object! This is yet another fuzzy shawl for yet another of my sisters. (And yes, she will get some use out of it even if she does live in Mexico!) It’s based on Melody Johnson’s pattern (as are they all) for a handy shoulder warmer. I used the same yarns as the last one in a different colourway. Here’s a pic of it blocking: 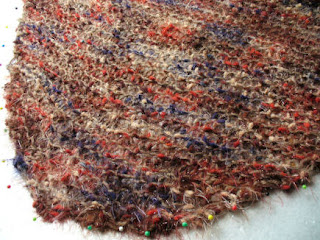 Comments: This one might be a wee bit bigger than the last one I made, but then my baby sister is a wee bit taller than my second sister. It’s kind of a guesstimate thing anyway. I hope she likes the colours which are quite different (apart from the orange) to my usual palette. I’m not much on beiges and tans but this is quite attractive.