“There is no end of craving. Hence contentment alone is the best way to happiness. Therefore, acquire contentment.” Swami Sivananda

So far my Year of Contentment isn’t going so well. I’m not at all content with still feeling crappy. Sorry, I’m sure you’re tired of my whining about it. I’m tired of my whining. I think if I just felt a little better so that I could get the idea that it might be going away eventually then it wouldn’t be so bad. But I have better days and then worse ones. Like yesterday when my throat was even more sore than usual. Bleh.

Also on the Lack-of-Contentment front, I’ve been craving stuff. I’ve already bought way too many books, some of which I really don’t need. And sock yarn because I was getting low on options for the gazillion pairs that I need to knit this year. I’ve got at least half of the year’s supply now. Am I content yet? Probably not. But I’m behaving myself for the moment anyway.

On the Stash-Reduction front, I did give away my Addi Turbo circular needles for a token donation of $10. These are quite old and have a much stiffer cable than the newer ones. I hope they are still at least somewhat functional. I will never use them. Turbos are too blunt and too slippery for me. I have lots of other needles that I don’t really want also, but I’m afraid that there really isn’t too much of a market for vintage Aero cable needles. I particularly loathe the bent tip ones and the cables are awful and stiff. The points are fine though. Not to mention all the straights which I never use any more. Some of these needles were from my cousins’ grandmother who died many years ago. I inherited them because I was the only crafty person in that side of the family. And some are from my late adopted mom. I didn’t inherit any of my grandmother’s needles or hooks because one of my sisters, who actually was closer to her, got them first. S’okay by me. I have more than enough! Interestingly all 3 ladies were in their 90’s when they passed away. Does knitting help you live longer?

The needles that I really prefer are bamboo dpns (sets of 5, not 4), Addi Lace circulars and Denise for anything the lace circs don’t cover. Right now I’m starting on the Ice Queen smoke ring/wimple/cowl from Knitty — in spite of all I could do to put it off until I’ve finished more socks or gotten further on Hepburn Cardi. Yes, I got bit by Startitis. My version is called Twilight Queen due to the colour of the logwood-dyed SeaWool handspun and the transparent blue-violet beads with a lovely silver sheen. Here it is so far. 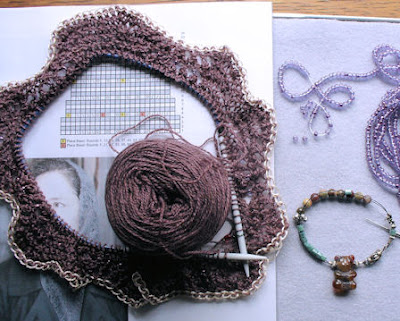 The colour is somewhat more accurate than in the last photo of this logwood-dyed yarn. I’m doing option B (garter stitch and lotsa beads) and it’s actually a very easy knit, though the chart is a little confusing about when to add the beads. It starts with a provisional cast-on and I used my favourite crochet-directly-onto-the-needle cast-on with some cotton weaving thread. You know, if I’d thought ahead I could have wound off enough yarn before I started to do the picot bind-off on that end without having to rejoin the yarn. Too late.

I’m nearly done the last toe on the B-Bil socks. Then it’s just grafting and the ceremonial bath and they’re finished. Now I don’t feel so bad about starting the wimple. I still have more socks to work on but that’s ongoing forever. I don’t want to totally stall out on the Hepburn Cardi though. I want to be able to wear it when the weather gets a bit warmer. Right now it’s snowing and looking very winter-wonderland-ish out there: 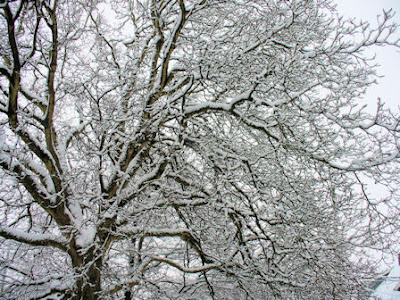 I’m content that I don’t have to go anywhere today! But it sure is pretty. Until it starts to rain at least. It’s amazing how much brighter it is in the house with the reflected light from the snow. I don’t have to turn on nearly so many lights today to see what I’m doing.

Being content is a lot harder than I thought too :)