Just started raining. We were out working in the garden again for awhile today. Dug out my poor old rhubarb that hasn’t been divided in nearly 30 years. Oops. The heavy roots were knocking over the retaining wall beside them which now leans at a precarious slant. Hope it survives since we only put three little teeny plants back. They look kind of pathetic: 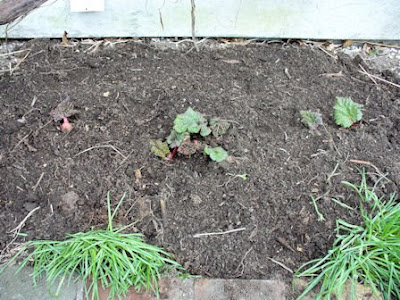 So we may or may not get any rhubarb at all this year. However, one plant division is going to T-Man’s mom and we left 2 potted up out in the alley for whoever wants them. The rest of the roots I collected up for dye: 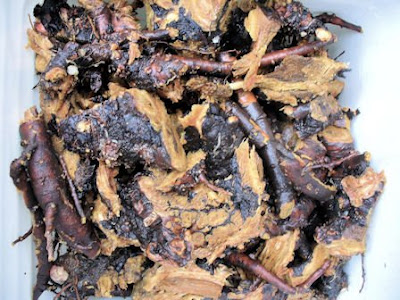 It’s nearly a big bucket full so I’m hoping for some good colour. I’ve never used it before but according to Jenny Dean it’s decent yellow even without a mordant and coral-pink with an alkaline modifier. Should be interesting if I can get it chopped up without killing my hands. It’s quite soft right now but there’s a lot of it. I remember how hard the madder was to get into small enough bits.

I also finished knitting my gloves:

aka Gloves with Berried Cuffs 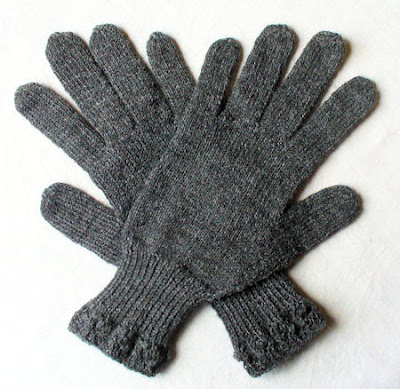 Pattern: My own pattern, based on Marnie MacLean’s Hooray For Me fingerless gloves with fingers from Ann Budd’s The Knitter’s Handy Book of Patterns. Baby finger lowering adjustment was originally from an article in Spin-Off by Rita Buchanan. Fancy cuff pattern from Knitting Patterns Book 250, pattern 235, p. 116.

Comments: The only way to get a pair of gloves to fit my dinky hands, besides the dollar store stretchies, is to knit them for myself. These ones will be very handy though a little late for this season. I can also wear my fingerless mitts or wrist warmers over them for extra warmth.

I had some problems with the pattern chart for the cuff when I accidentally transposed the knits and purls. Not my fault — the chart in the book only showed a vertical dash for knit sts and the purls were blank. I accidentally read the vertical dashes as horizontal ones and assumed the blank ones were knits since that’s the more common convention. I was knitting in the Dr’s office when I had an epiphany on why it wasn’t looking right and switched knits for purls and vice versa. I subsequently re-drafted the chart in Knit Visualizer so I wouldn’t screw up the second cuff. Here’s the corrected version: 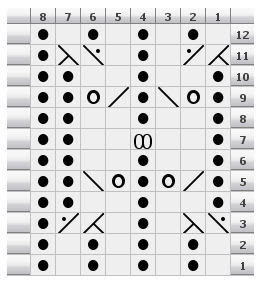 The next part of the fun was what I call the Japanese nupp or berry in the centre of the cuff motif. According to the pictures in the book (which of course has no English in it) this is accomplished with a crochet hook. It’s similar to an Estonian nupp but it’s worked into a column of purl stitches and completed in a single row. It also has an extra step that pops it out more from the background.

With a similar-sized crochet hook to your needle size, go into the stitch as if to knit. Draw through a loop, yo hook, go into the st and draw a loop through, yo hook, draw a loop through st, yo and pull it through all sts on hook. Then insert your hook into the st in the row below (under the purl bar and through the st), draw up a loop and pull through the st on the hook. Transfer the rem st to the right-hand needle. And there you go. As with regular nupps it helps if you make your sts and yo’s loose enough to easily pull the crochet hook through them all. But it’s much easier to do it with a crochet hook than trying to purl all the sts together on the next row. Of course you can make fatter nupps by increasing the number of sts on your hook before pulling the last loop through.

To upsize these gloves to more normal women’s hands, just up the needle size one or two increments. If the wrists are thin, keep the 2 mm needles for that part and switch to 2.25 or 2.5 mm for the hand and fingers. Knit the fingers to the correct length for the recipient, usually another 2 rows longer for most people. It might take a bit more than one ball of yarn for larger sizes. It’s pretty close to call.