Another Bunch Of FOs

I was amazed at how many tawashi I ended up getting out of those 2 balls of Japanese acrylic craft yarn. Seven in total! See the whole flock? 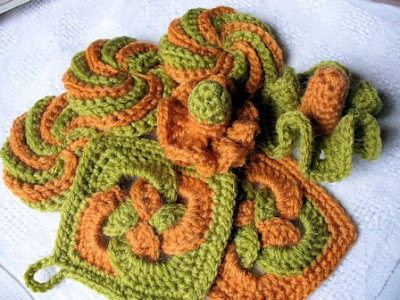 Of course tawashi are smaller than you might think. These aren’t full-sized washcloths. In acrylic they aren’t to be used on skin anyway! Other tawashi rules are no bleach and no boiling water or microwaving. Luckily the yarn is antibacterial but throwing them in with the regular laundry is the best way to keep them clean. Apparently many are never used but kept for display only. I can understand that. They’re cute! Anyway here’s the whole scoop:

Comments: I did the Linked-Rings nearly as diagrammed except that I did 2 complete separate rings, joined them together with the third chain and wove the fourth chain through before joining the circle and continuing. I left off the hanging chain on all but the one I’m giving Masami as a thank you.

The Spiral got easier for the second and third ones. Tips: Leave a long end at the beginning and the end for stitching up. Bring the second colour in front of the first and through the last stitch of the previous colour. Then bring the last colour yarn to the front and around the next colour again before working the turning chain. This twists the colours and locks them up the side so they don’t show later. Sew the diagonal tube together by going through the posts of the first and last rows instead of the loops. It looks very similar to the other rows that way. When gathering the edges, slip the needle under the first loop at the end of each ridge peak. This automatically picks up every other row and they slide together nicely in a pinwheel. I only used one length of yarn to gather both sides thus locking the centres together through the middle of the puff.

I accidentally used the 5mm hook for the first Frilled tawashi – it should have been a 4mm. The “handle” should have been firmer and it used quite a lot of yarn. I used up the last of the yarn on a modified version of the Frilled one: only 6 rounds at the top (started with green and changing to orange when I ran out) and then the first round of the skirt as written. The second round used (ch1, 1 dc) twice in each space instead of the 3 dcs. I only had about a meter of orange yarn left. Then I stuffed the "handle" with yarn ends and stitched around the hole and drew the yarn up to keep them in place. It works even better than the original as a keyboard duster! I especially like the solid handle.

I used one of the Spiral puffs for the dishes for several days now (instead of my usual Dobie scrubber) and it works amazingly well even on caked-on grunge. Good thing I have 3 though because they will need to be washed fairly often.

I read on somebody’s blog (sorry, I forget whose) that summer is more relaxed than other times of the year. Her life must be completely different than mine! My quietest time is January and February. But I’m happy to give up the relaxation (along with the dark and the rain) for the sunlight and the chance to play in the dirt. If you have a garden, spring and summer are the busiest times particularly when you have to spend a ridiculous amount of time watering. Luckily that hasn’t been a problem this last couple of weeks. We seem to get rain and then some sun so things are growing quite quickly. However, no matter how hard I’ve been slaving I still haven’t finished up all the major garden work that I wanted to do. T-Man is doing his prodigious share as well and we’re still nowhere near where we’d like to be right now. Oh well. Like housework, it’s an ongoing project.

Our little local Ravelry meet-up group decided after meeting yesterday at the usual coffee shop that a field trip to my house was in order. There were only 4 of us this time so we had the tour of Damselfly’s Delightful Home for Wayward Fibres and then spent some time out on the deck with the spinning wheels and our knitting. It was very pleasant! Though if I’d known they were going to spring this on me I would have made the bed and done the dishes, not to mention vacuum up the gigantic dust bunnies under the loom. Maybe. Or maybe it just doesn’t matter that much.

Gotta take Ms Polly into the vet today. Seems she’s just not eating or drinking and is losing strength fast. I’m hoping it’s her chronic upper respiratory problem and some antibiotics will perk her up again like it did a couple of years ago. But then she’s 20 years old so who knows? I’m feeling like it’s too soon after losing Julie to think about losing her mom too. Sigh.