1. My family. Milady Daughter and her Lord made the reservations for our extended weekend family camping trip at Manning Park’s Lightning Lake campground. We were lucky to be able to get a double site to accommodate our van with the awning over one table, our kids’ two large tents, our screen tent over the other table and parking for the two cars. T-Man and I got there first on Saturday and were joined by Milady & Milord before dinner. The Ninja, his Snow White (who had strep throat and was on antibiotics but was glad she came anyway), Princess Pink and Stargazer showed up late Sunday afternoon so it was a full gathering of our branch of the family clan. Manning is just about 3 hours drive from our house so it’s far enough away and primitive enough to feel like a real vacation in the mountains. 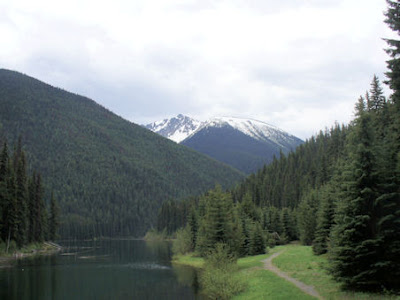 2. My home’s hot water heater. It takes being out in the woods in the mountains for four days to really appreciate what a treasure hot water coming out of the tap can be. When we got home I had four big loads of laundry to do (not all generated by the camping trip, mind you) but first I luxuriated in a long hot shower. Yes, there are showers at the provincial campsite but they are lukewarm at best and the washrooms are unheated so they get very cold at night and don’t warm up much at all during the day. Environmental points for the solar hot water but it’s not that efficient especially when there are lots of folks who want to use it and not a lot of sunshine available. I can usually get pretty clean in a small amount of water from our kettle (having very short hair helps) but when we were awakened early each morning by small children who wanted to come in our “house” and warm up, it’s all I could do to get some clothes on before the onslaught. (Their grandfather didn’t even try. He just lazed in the warm sleeping bags until he absolutely had to get up.) Also it took about three kettles full of hot water to do all our dishes after breakfast and dinner meals. At least everyone took turns with washing and drying.

3. The weather. It was very cooperative. The little bit of rain on and off on Saturday and early Sunday morning dried up really quickly and most of the rest of the time was high cloud alternating with warm sunshine. There was still some snow in the campground and a lot more in the higher areas so the wind occasionally had some bite in it but it was generally reasonable. However it was quite cold at night and extra clothing and blankets were mandatory. I saw my handknit socks on at least five pairs of feet out of the eight of us! The bugs thankfully were very few and the fisherpersons caught enough rainbow trout for one dinner for everyone and a few to take home. (We’ll have the last of them today already cooked in tinfoil over the barbeque. Yum!)

4. Our 1989 VW Westphalia. She might be old but she sure is an improvement over a tent. I appreciated her even more after watching the kids put up their fancy tents, one of them in the rain. With the van you just pop up the top, turn the passenger seat around to face back, turn on the propane and you’re there. You can even heat the water for morning tea and coffee without getting out of bed! Long may she wander the roads. They don't make these any more.

5. My first aid kit. The littlest family members enjoyed themselves most of the time except for a few incidents. Princess Pink took a couple of tumbles and because she was reluctant to wear her jeans like everyone else (preferring to swish her royal skirts at us instead) she ended up with her granny’s fancy red bandaids on both knees and a scab on the end of her nose.

6. My hearing aids and the ability to remove them. Stargazer decided that camping was great fun except for the sleeping-in-a-tent part. He kept waking everyone with his cries of protest. Tent walls don’t muffle much sound and my ears, even without my hearing aids in, perk up when I hear baby cries. Old mommy habits die hard, if at all. I was glad I could just roll over and go back to sleep unlike his poor parents who were trying to soothe him back to sleep. Unfortunately his desire to run around the camp in the dead of night was not an option so it’s a good thing he’s really really cute! Our evening’s fire was definitely big enough for a roast… 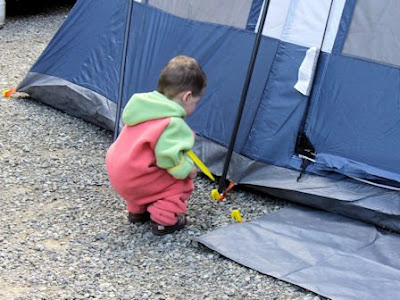 7. Mother Nature. We saw lots of birds and animals — great entertainment for both big and little people. Manning Park’s critters are almost too friendly! The mule deer (Princess Pink saw her wandering through first) came nearly into our campsite several times a day. 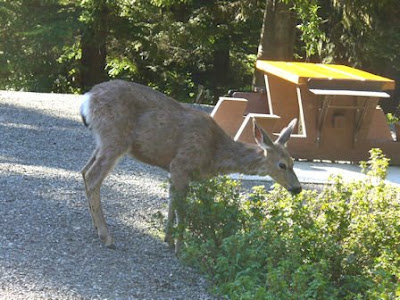 There were plenty of noisy Douglas squirrels, cheeky ground squirrels and chipmunks and even a tiny vole (which only I caught a glimpse of while the others were fishing). The whiskey jacks (aka Canada or gray jays) were competing with the larger Clark’s nutcrackers for handouts and the grandkids’ leftovers. Even the brown-headed cowbirds at the picnic area got into the begging act. The red, black and white sapsuckers and blue and yellow Audubon’s warblers looked like flying jewels and the various calls of the crows and ravens and the laughing loons made it seem like we were in the Amazon jungle!

The flowers were very pretty but a lot of them weren’t out yet. We didn’t go up to the alpine meadows because the road was still closed. However there were moss phlox cushions in multiple shades of purple, yellow arnica, orange paintbrush, violets both purple and yellow, wild strawberry blossoms and rare little calypso orchids (also called fairy slippers). 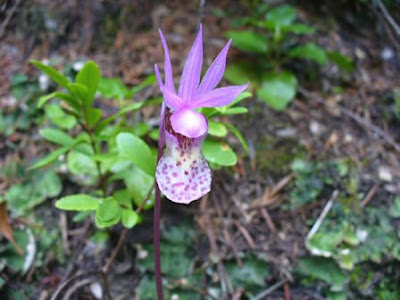 I brought three knitting projects with me, you know, just in case I got bored. Heh. I managed to knit a couple of inches on the Imperial Purple Socks for Milord Son-in-Law while watching them fishing but that was about it. After the grandkids arrived there was very little quiet time. Funny how that happens. On the last day (Tuesday) we all went for a walk along the Strawberry Flats trail to salute the spot where T’s dad’s ashes were spread after his passing. It’s getting harder to recognise it as the trees are growing up around the area. Then we continued up to where the snow started to cover the path. We had the obligatory snowball fight and built a teeny snow-girl. 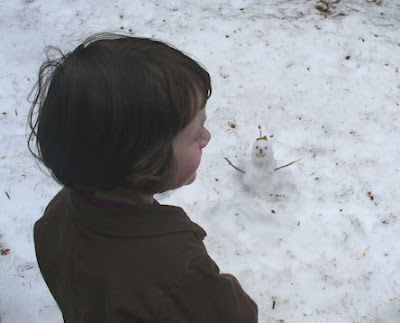 On the way home after our picnic lunch we all ran into each other again in our separate vehicles while the traffic was stopped for an accident. A big dump truck had gone over the side of the mountain highway and it had to be towed out with monster tow trucks. We were lucky we delayed leaving the park because all the traffic both ways had been blocked for quite some time but we only had a short wait before moving on again. After passing each other several times (and lots of waving back and forth), we made it home in plenty of time to unpack and clean the van for the next adventure. That probably won’t be until September which feels like a long time away, but it’s not at all.

Which company made your hearing aids?

Hi Anonymous! I'd love it if you signed your posts with something a little more personal, BTW. Just so I can distinguish you from all the other Anyonymouses. :)

My hearing aids are the behind-the-ear type: Delta by Oticon. I adore them but they cost as much as a very nice computer - each. Very little of the cost was covered by T's extended health insurance. But they are totally worth it! My prescription can be programmed in and adjusted by my audiologist. I've been wearing them for nearly 2 years now with no problems except that they eat their teeny batteries for breakfast. LOL!

Whoops! Actually the Delta is "receiver-in-the-ear" type, not behind-the-ear.