Lawd, What A Weekend

What have I been doing since last I had time to blog? Friday afternoon I spent wrapping Princess Pink’s birthday present and making her a personal 8-page card. Then Saturday T-Man took his mom and me to see Auntie90 who is still in the hospital while she waits for a more permanent spot in a care facility. She’s able to get up and about a bit on a walker now, so she has some mobility back, at least to get to the washroom on her own. She was cheerful and chatty but looked quite frail. Nana said she certainly looked a lot better than she did when she was admitted last month. Which speaks volumes because I can still see a big difference from just a few months ago.

After our slightly prolonged visit (Auntie didn’t want us to leave after the half hour we’d planned) we headed over to Snow White and The Ninja’s house for Princess Pink’s 4th birthday party. Unfortunately a number of family members couldn’t make it so it was a smaller gathering than Stargazer’s 1-1/2-year party in June and there weren’t any other kids there except her little brother. The weather wasn’t as nice either so we were indoors while it alternated sun and rain and sometimes both together. Princess had a great time anyway playing with the adults until the gifts were opened. Then she wanted to go play with her new toys in her room and I had to convince her to at least come down for the cake. This kid is sociable up to a point and then she wants her personal time alone. As I was explaining to her that everyone wanted to sing to her and then she could blow out the candles she said, “OK! I get it already.” She sounded like a jaded teenager instead of a 4-year-old. (I’m trying to decide whether to be amused or frightened for 10 years from now. Yikes.) She came with me though and looked quite impressed with the cake that her other grandmother had baked for her. Oh and I nearly forgot, the tam and cardi that I made her looked really cute and fit perfectly but still with some growing space: 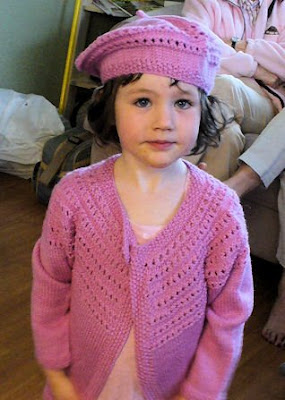 Note her dad put it on her and I didn’t have time to rearrange for a more professional shot because she was eager to get to the next gift. Another successful project! She won’t get much wear out of it until the fall but that’s fine. Of course the outfit didn’t hold a candle to the two Mariposa Barbies (with wings!), unicorn and Polly Pockets toys she also received. But that’s ok. I make her things because I want to. Otherwise I’d just buy her more Polly Pockets which she adores. Unfortunately they keep losing body parts. Or whole bodies.

Yesterday a 7-person contingent of family spent 8 hours sorting and packing Auntie90’s basement. Oh. My. Goodness. Clothes, clothes, more clothes, old dishes, figurines, a rifle (and ammo!), Christmas decorations, exercise equipment, more face cream (you could have filled the bathtub with the face cream), an accordion (sadly in extreme disrepair or T-Man would have coveted it), outboard motor and more. Much more. Inspires me to go through my stuff again and cull out some more. Of course since I brought several bags of “treasures” home from Auntie’s, I’ve actually increased my personal stash instead of the reverse. I couldn’t help myself! Most of her stuff is going to charity anyway. There’s not much of any real worth. And we got rid of bags and boxes of garbage and recycling. You can actually walk around in her basement now. (We won’t mention how I managed to clog up the toilet. It’s very temperamental.) We are expecting that the house will be torn down when it’s sold. It’s on a huge lot and there is much building of townhouses and duplexes going on around it. A teeny little old house that needs extensive renovation is toast in that kind of environment when you can make a huge profit by building as much as the laws will allow on the land. The sale will help keep Auntie in comfort anyway which is all the family wants. None of us are developers or contractors.

Today I’m really tired. T and I both slept badly last night after our exertions and stresses of yesterday. That was the second weekend in a row that was taken up with family obligations with an extra-busy week in the middle and we are missing our usual long walk together and time to decompress. Hopefully we can go walkies after he gets home from work this afternoon. It’s a perfect day, sunny with a few clouds and not too hot. And I don’t have to water the garden today after the rain either. Though I could weed some but instead I think I’ll try to clear up some of the stuff I brought home from Auntie’s which is piled everywhere in my studio. Even though I should vacuum the main floor which hasn’t been done for weeks. Literally. Ick. I already have yellow fingers from picking the day’s production of coreopsis flowers and also some more lavender to dry. T is still teasing me about picking all his flowers. Not like HE planted the coreopsis! I planted the originals in past years and they mostly planted themselves this time. Besides I left some to look at. I’ll pick those tomorrow instead. Heh.

The sweater and tam are adorable. But goodness, what a busy weekend! And I'm really wondering about the face cream stash and the outboard motor. Sounds like a treasure trove of sorts.

My only plants are the non-harvestable variety. It's not stopping Husbeast from similar teasing about growing an avocado tree in Germany. Hmph!