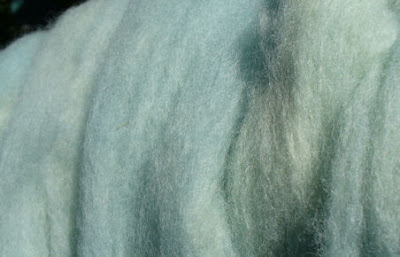 Well, a pale shade of robin’s egg blue which is at least something to be proud of. It looks really nice with my walnut brown. But I’m getting ahead of myself. Beginning at the beginning, I went out to the woad patch early this morning: 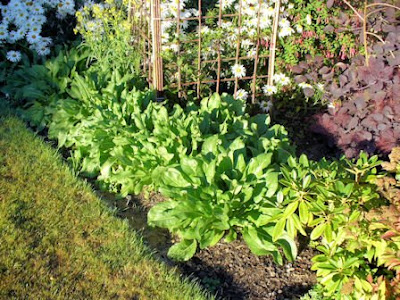 Wish my vegetables grew half this well! I snipped the leaves off half of them: 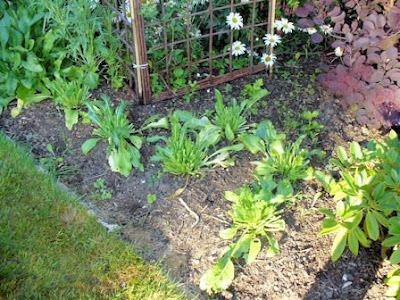 Six plants are now denuded. Washed them (no extra charge for the spiders, ants and slugs) and chopped them up into large-ish pieces: 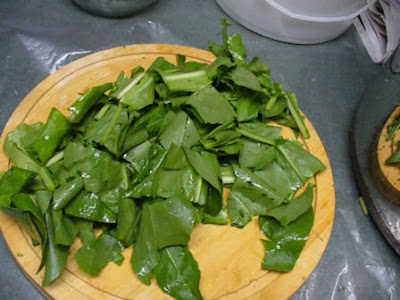 At that point one of my stainless steel dye pots was heaping full with 2.2 kilos of leaves. Like a huge salad! But not terrifically tasty. I half-filled the other dye pot with about 8 liters of hot water and a liter of the acid water that I use for soaking wool prior to dye-painting. (I had it on hand and it needs to get used up.) I haven’t got any pH paper anymore so I have no idea what the actual pH of this was but I was hoping somewhere between 5 and 6. I put the pot on the dye stove and brought it up to a boil. Then I added the woad leaves a handful at a time, letting the pot come back to a simmer after each addition: 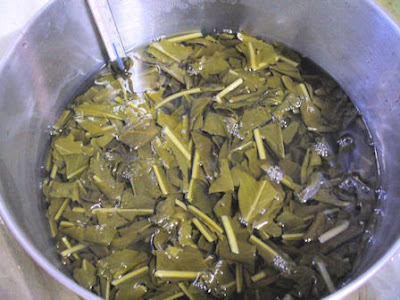 Woad soup. When it was all in the bath and the water was again just boiling, I took the pot off the stove and put it in the sink on a wooden trivet. My basement utility sink is plastic and I didn’t want to melt it! Then I filled the sink with cold water and threw in three 2-liter bottles of ice to cool the pot quickly. I changed the sink water again a bit later to cool it down some more. When it got to room temperature, I strained off the leaves and squeezed them out to get the last drops of liquid. (I could have used these again for a more conventional dyebath but I put it in the compost anyway. No time or energy to play more and tan or pinky-beige is all the colour you get anyway.) You can see how the huge potful of fresh leaves is now reduced to a much smaller amount after the simmer! 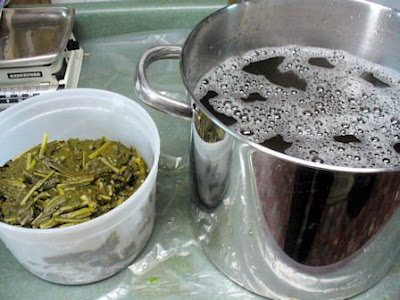 The liquid remaining was a deep reddish brown. Next I had to judge again without any pH paper and decided to add about 15 ml of soda ash to bring the pH up to hopefully somewhere between 9 and 10. Now I needed to aerate the bath to precipitate out the dye. I wasn’t about to kill my arms and shoulders so I used my trusty Mixmaster. It made a lot of bubbles so I think it worked ok: 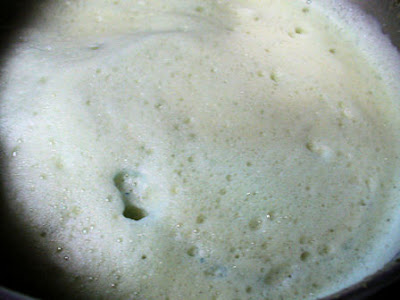 The bubbles were yellowish and then green and blue and then back to greeny yellow. The changes were subtle and more than one colour was present at a time so it was harder to tell what was happening than I thought it might be. After mixing for maybe 15 minutes or so, I stopped and put the pot back on the heat to bring it slowly up to 50 C. Then I sprinkled on about 10 ml of thiox (thiourea dioxide aka colour run remover) to take the oxygen out of the bath that I’d just put in. Seems counterproductive, doesn’t it? I turned off the heat and put on the lid and let the pot sit for about 40 minutes or so. It was clear yellow with a slight green cast by then so I knew it was ready to be used. I had already soaked 250 g of crossbred wool sliver so in it went: 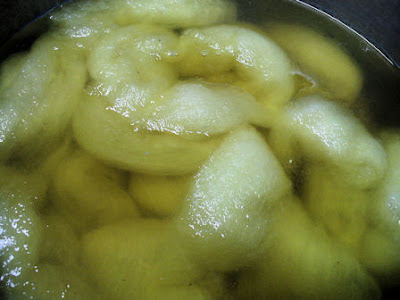 This first time I left it for about 20 minutes. I found the best way to remove it without adding a lot of air was to put my gloved hands in and squeeze the wool gently to the side of the pot and then lift it out and into a bucket in one quick motion. It was pretty uneven when it came out and there were patches of beautiful blue but only a couple of them on a much more pale turquoise colour. I rinsed the wool quickly in a bucket of clean water and then squeezed it out carefully and hung it up over my new stainless pan to drip and oxidize. The pot had darkened to blue-green so I figured I’d let too much air back into it. I warmed it up on the stove, sprinkled on a wee bit more thiox and left it for awhile to settle again. I redipped the wool twice more but only for about 10 minutes each time. The first time it got visibly darker and more even but the second time it didn’t get much darker at all: 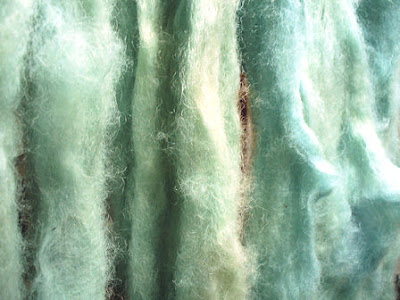 By that point the bath was looking a very clear yellow so I didn’t think there was much colour left. I tried dyeing a tiny skein of silk and wool tied with cotton thread but after two dips it only came out the palest turquoise so I figured I’d used up everything in the pot.

The wool is a rather pale shade of blue but that could be because as usual I tried to dye more fibre than I should. Either that or the plants don’t have as much dye in them as I thought they should. It’s interesting that dyers eventually gave up using woad after indigo was easier to obtain because woad certainly isn’t particularly strong. But it does grow beautifully in our temperate climate which is a big plus and they aren’t bothered too much by bugs. Some good websites for information:

Sarah Dalziel’s extraction method. Since I was using her seeds, I thought I’d use her techniques too! That girl knows her woad stuff.

Wild Color by Jenny Dean has a great chapter on dyeing with woad. Since I was going straight from extracting to dyeing without precipitating and drying the indigo in between, I pretty much used her method for that part of the procedure. And the neat thing is, I still have half the plants and hopefully the ones I stripped will grow back as well. So I can try this again. With less wool next time perhaps. As soon as I recuperate.