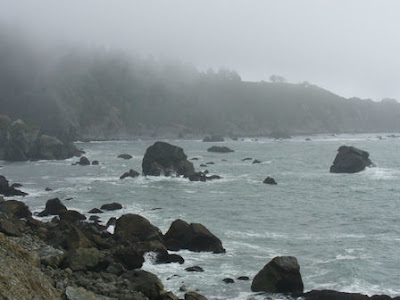 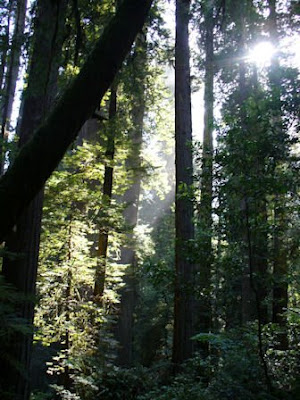 Here hot water comes out of taps, you don’t have to put coins (CA) or tokens (WA) in the machine to have a shower and you can adjust the temperature (not in all 3 states including OR) to your liking. You can get dressed in more than 2 square feet of space and even (gasp!) pee while sitting on a warm toilet seat in private! Actually we were home on Tuesday afternoon but I’ve been spending some time catching up with things around here. Still not completely there yet, but I decided this post has waited long enough. So, where to start?

We had a blast and got very relaxed, just like we planned. However we didn’t get as far south as we originally thought we would and was our turning-around point. It was getting more crowded on the roads and in the state park campgrounds the further south we went and we just decided that it wasn’t that important to get to Big Sur. Too populous besides the fact of the fires they had there this summer. No big deal. What we did see was lots of beaches, rocks, dunes, redwood forests, sunsets, twisty-windy two-lane highways, wildlife (animal and human), and some crafty shopping. We walked or rode our bikes or both every day. We even climbed a huge sand dune. The worst that happened was that it took us 3 hours in a lineup to get to the border crossing and about 3 minutes to get through once we got to the booth. That was the first day and it was our own fault that we tried to leave town on the Saturday of a long weekend. Our impatience to be gone was quickly curbed!

Everything else worked out pretty well. We only got lost a few times, mostly on busy city freeways with confusing signs and inadequate maps, but we quickly got back on track. The weather was mostly very cooperative and we only had real rain on the third-to-last day. And even then it was only temporary. We did miss some of the coastal scenery due to fog but nowhere that we hadn’t seen before. Even the temperatures were moderate and although if we had power we used the little heater in the mornings to ward off the damp and chill, we were often too warm under our lightest sleeping bag at night. The advantage of heading south instead of north or east this time of year.

As for the shopping, I first tried a little yarn shop in called Nestucca Bay Yarns and got a book and some sock yarn. The lady in the shop was very accommodating, especially when I needed to use the bathroom! On the return trip I went to the local Jo-Ann’s also in while T got the groceries. This time all I got was some WonderUnder fusible which I can probably get here but it’s really cheap there. Is it me or is Jo-Ann’s going downhill? They seemed to have much less stock and poorer quality stuff than last time.

While we were in CA camping not too far from I went to Dharma Trading for the first time. I was a bit disappointed because the shop is mostly a regular knitting store, rather than a surface design supplier. I think I was expecting something more like Maiwa. Though they do have a whole room with clothing blanks and dyes and paints, that seemed to be rather less important. There was also a small room of dyeable and dischargeable fabrics which I definitely took advantage of. Dharma does most of their business with mail-order customers and they have a large warehouse facility in another location for that. So the retail store obviously caters more to what the local population wants which are knitting supplies. I got a couple of skeins of dyeable yarns as well as the fabric, though I might have gotten more if they were better stocked. It seemed like everything I was interested in only had one available.

A big treat was Lacis which we headed for right after we left Dharma, over a very long bridge and in and out of crazy freeway traffic. We’d been there before last time we were in CA but we were coming in the opposite direction so we were somewhat unsure of the way until we got off the freeway. Lacis is like an Aladdin’s Cave of lace treasures, some old and some new, and all the supplies to make any kind of lace or trim you can think of. I was getting tired by this point so I didn’t spend as much time as I would have preferred but still bought a few things including a bone nalbinding needle for Milady Daughter who was learning that technique. I also caught the boss, Jules Kliot, who generously allowed me to take photos of a new tape lace exhibit that hasn’t even opened yet. He’s quite a character! 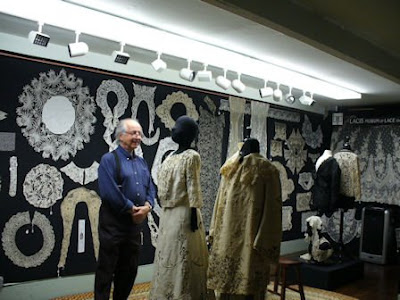 BTW you can see the exhibit in slide show here.

That was all the shopping except for the inevitable Safeway in a number of places that we hit every couple of days for supplies. Until we were on our way home again when we went into from the coast to go to Powell’s bookstore. We both went a little crazy in there! So easy to do with so many books in one place. Though we managed not to spend as much there as I did at Shipwreck! Silly me. I thought that I only needed a few bead supplies. That resolve only lasted until I got in there with so much to choose from.

If you’ve never been to Shipwreck I recommend that you check out the catalogue for a hint of how huge this place is. Isles and isles and more isles of beads, supplies, findings, tools and anything else you can think of that a beader would want. A whole room of books and magazines. Another whole room of stones which I wisely stayed out of. I still spent way too much there. Way. Too. Much. But, oh, it was fun!

Lastly we stopped at Weaving Works in . I was also a bit disappointed in that it also is mostly a knitting shop these days. I don’t know what I was expecting since I hadn’t been there for over 10 years but the weaving, spinning, basketry and dyeing supplies were pushed to the corners in favour of knitting yarns. In spite of myself I got more sock yarn. I figure I might as well get what I haven’t seen at home! The prices were quite high though so I didn’t go nuts. There’s tax in WA too, unlike OR.

Coming back across the border on a Tuesday afternoon was a piece o’cake. The wait was only about 4 cars and we breezed through. Though for some reason when the customs guy heard we’d been in CA he wanted to know if we’d been to . isn’t exactly close to the Mexican border, now is it? No problem bringing our shopping across since we’d been gone 24 days.

Now I’m missing hearing the waves at night and being able to reach over and make the tea without even getting out of bed. But the weather has gotten rainy and cold so that makes me feel a bit better. 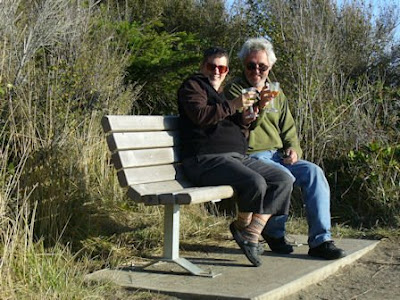 Today is T-Man’s birthday. He’s now officially older than I am – until I catch up in November. Happy Birthday, sweetie! (Yes, we are still speaking after 3+ weeks in a teeny-tiny van together.) Don't we look like we were having fun? Good thing this isn't smell-o-vision though! Our access to showers was sometimes a bit far apart for perfect hygiene.

Looks like you had fun. We were beginning to wonder if you were planning on coming home at all. :) Nice to have a nice long vacation like that though.

Pass along my birthday wishes to Uncle T please.

Perhaps we'll see you on Sunday? (Depends on how the move goes for us.)

Welcome home! Glad you had a good trip. Three weeks together in a wee van? It must be love! ;)

You missed the excitement in the neighbourhood (lucky you). The contractor knocking down that house on your block somehow punched a hole in the gas line. Took a couple of hours to fix. Glad to have you back!

Welcome back!
You were missed :)

Thanks for all of the lovely "welcome homes"! I am glad to be back before the weather turns nasty. I am a definite Homebody type. Unfortunately the relaxed feeling we both got is wearing off really fast!

Nice photos and interesting reading! Thanks for posting. Hey, next time you do a road trip and have some bead money to spare :-), come over to Spokane. You'll see some great scenery on the way (Soap Lake, anyone?) and you can visit our bead showroom here.

But Dave dear, you guys are only wholesale and you don't want to sell to little retailers like me! I don't sell my work. I don't know if you do this kind of thing but have you considered having a booth at the ANWG conference next spring which will be in Spokane? I may be attending.

Louisa, that's a common misconception. Customers who don't have resale/tax numbers simply pay tax on their purchases from us. :)

I'll mention the ANWG conference around the office and see what we might do in connection with it.

Well, gee! Maybe you should do something about that misconception then? I think it was the "for professional craftspeople" in your ad along with the "wholesale catalog" that made me feel your business wasn't interested in little old me. Plus you don't include a street address so it's not obvious that you have a bricks & mortar store. However if I get to Spokane I just may drop in! Thanks for the invitation.

I should also mention that you could get yourself invited to one of our bead shows near you. We're in the Puget Sound area 6 times a year. Thousands of strands of specially purchased beads...

OK, Dave, I'm happy to chat but you don't want to spam on my blog! Because I have the power to wipe it all away with a flick of my wings...and then I'll say mean things about you and everybody will be all UNhappy. We're not going there, right?