I’m missing my friends in the Spectrum study group today because I have a sore throat. And a headache. Darn. I didn’t want to share this with anyone though. It must have been all that smooching and hugging on Sunday at T-Man’s aunt’s 90th birthday party/family reunion. I don’t have a very good immune system it seems. Probably from hanging out at home all by myself too much. How do I fix a lazy immune system?

Also apparently I can make it rain just by thinking that I should go back out in the garden and do some more work. I was only about 2/3 of the way through tidying up the veggie patch but I was really happy to get all the tomato plants cleaned out of the greenhouse yesterday. It’s getting too late in the season so I picked all the remaining tomatoes before composting the vines. I have three 3-litre pails full, one with small ripe tomatoes and the others anywhere from green to almost ripe, most of which should finish ripening in the house eventually. I think the Juliette roma-shaped cherry tomatoes did the best as always. I’m surprised I have any Juliettes left after Princess Pink ate about a dozen of them on Monday and I gave her parents a bunch more to take home for later! They are indeterminates which means they grow very tall but nothing seems to bother them. I lost quite a few of the yellow Taxi tomatoes because of some kind of rot and the other type of red tomatoes didn’t produce much. They were both determinates which means that they only have just so many flowers and then stop growing. I think they stopped too soon, just as it was warming up after the crummy Junuary weather we had. Ah, every year is different with successes and failures. We just keep trying things.

In the crafty area of my life, I’m feeling the need to start something new. But first I have to clean up my workspace. I’ve been piling things up and not putting everything away. I’ve got stuff that needs to be inventoried, books to be covered with clear plastic to protect them and a month’s worth of dust to be vacuumed up. All that won’t happen though until I catch up on my reading. I haven’t even looked through some of the books I bought at Powell’s yet! So I guess there’s an advantage to the rain besides saving me from watering the garden. I have an excuse to sit for awhile.

So I’ll leave you with some random photos from our trip. Here’s the sunrise from the deck of the Keystone ferry on Whidbey Is., WA: 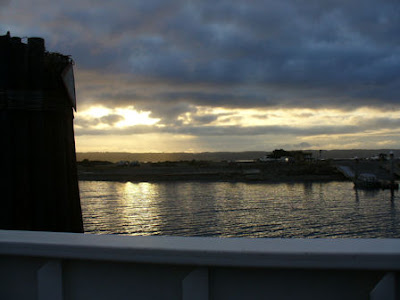 The hundred-foot high (at least!) sand dune in Honeyman State Park, OR, that we climbed with great difficulty to watch the sunset: 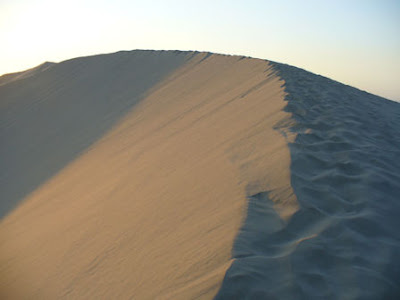 A huge (as big as my hand!) mussel shell on the beach at Carl Washburne State Park, OR: 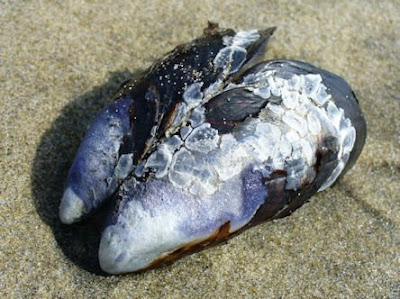 And a tidepool with a lovely green sea anemone at Harris Beach State Park, OR: 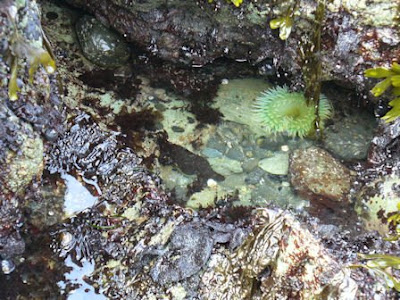 I'm so sorry you're not feeling well. I'm glad you're home; I missed your blog when you were gone!

I'm about to do my tomato assessment, which means unburying the tags--because I forgot what I planted where--and making notes. We've still got a lot on the vines but it looks like the rains have started for real. Unfortunately the most productive plants were the ones I didn't cage, so we have to gorge if we want to beat the worms.

All the starts were supposed to be good for our new area, but I think either the microclimate was a stretch for some, or else they are just a not-very-productive-or-flavorful varieties. It really is trial and error, isn't it? But the successes are sweet. Taxi was one of my best. . .

Oh, my, you take lovely photos! I am especially fond of your Whidbey picture. I grew up on Bainbridge Island, not far away. The light and color as seen from the ferry feels like coming home.

And, did you actually get to visit Powells? What a delight! I hear you about being behind in reading. I have a small stack piling up. Must make some cozy autumn time for a book or two and several cups of tea.