What Does The Eye See?

I’ve been trying to write up the Earthly Fingerless Mitts to post it as an FO, but it seems like I want to put so much info in it that it’s taking awhile. Not done yet. So meanwhile I was pondering the subject of photography. For me, a digital camera has changed the way I take pictures bigtime. And having a blog and needing to illustrate it has also caused me to learn more about how to use my camera better. I like to explore nature, colour, texture, line and composition. For some reason I’ve never been much for photos of people. Though I like “art” dolls, I’m not big on the human face or form in other types of art work. I’m even lousy at photographing family gatherings or the like. Weird, I know.

Now that I don’t have to pay to have photos developed by someone else, I feel much more free to take experimental pictures and play with the focus and settings. Then afterwards, I like to use Paint Shop Pro to play with the pictures even more. Only pixels are involved and I can save the original and anything that I change it into that pleases me, all as separate files. I rarely print anything out except my Finished Objects for my Notebook. Most images are viewed on the computer. And yes, they are backed up. Several times. Thanks for asking.

Of course some photos (OK, a lot of photos) are not great, but it’s all part of learning to see and also learning to use the technology, both the camera itself and PSP (or your image editor of choice). My little camera is several years old now and is not one of the new-fangled digital SLRs. I just want to use it right away – not spend half an hour setting it up to shoot! It has some excellent features though, including anti-shake and a really good zoom. Unfortunately I would have liked to be able to see the screen better in bright light. Sometimes I’m just shooting from the hip and hoping for the best!

We used to have a lovely old SLR camera (it got stolen, but that’s another story) and it took great pictures but was tedious to adjust correctly. Nothing was automatic on it! I remember having difficulty even seeing through the viewfinder with my glasses on. The biggest problem with old film cameras is the fact that you can’t see what you’ve taken until you are long-gone from that time and place. No chance to retake if something goes wrong. I'm spoiled for instant playback.

I’ve found I take my camera with me on many occasions even if it’s just for a walk. You never know what you will see that you might want to photograph spontaneously. Or what your photo might inspire in the studio! Has anyone else noticed a recurring theme in your current photos? In mine, I’m seeing a lot of leaves (with fall just past, that’s kinda normal!), textures (rocks, grasses, bark, sand etc.) and, now that winter is here, silhouettes of branches and tree trunks. Wonder what I’m going to do with them?

As an example of my Fun With Photography, here’s two of my flowering kale that are currently sheltering in the greenhouse: 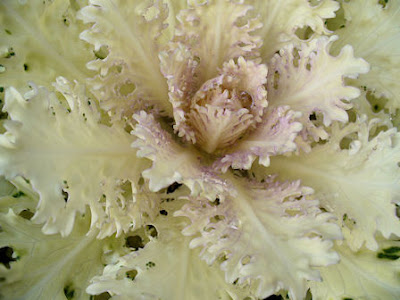 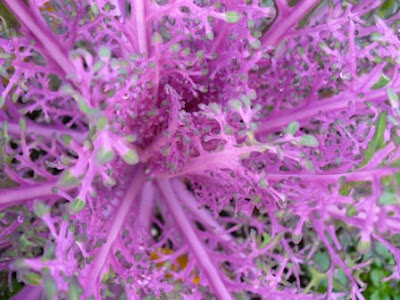 They don't mind the cold so much but the snow presses them down and makes them rot as it melts. We are in an uncharacteristic deep freeze right now that has probably killed off many of my still-surviving plants. I managed to pick some of the greens from the greenhouse yesterday but I don’t know if the plants will make it through the next few days of even lower temps. The geraniums, coreopsis and fuchsias were still flowering somewhat but I bet they’re gonzo now. Even the rhododendrons and aucuba are hanging their leaves down, a sure sign that it’s colder than usual here. And we're expecting a bit more snow later this evening or tomorrow.

Yes, kale is not a smart choice for places with heavy snowfall. I went to a small college where they made the mistake of doing a fall and winter planting of kale in all the flowerbeds. The students complained to each other about the stink and the depressing sight of the rotting kale whenever there was a thaw. It became sort of a joke.

Then someone came up with masterful prank. The student mailboxes were the kind you find in the post office, with little doors, only without locks. People started harvesting the nasty things at night and stuffing Kale-o-grams in their friends' boxes. I felt sorry for the mailroom workers.

I don't think they planted the kale a second time.

That's a really funny story! Nothing stinks like rotten cabbage - or kale which is in the same family. Yuck. Mine are currently safe inside the greenhouse. However I've lost a few things that might have made it through to spring if it hadn't gotten so cold. More to come! Several inches of snow now and counting.