When I’m squinting in dismay at the lovely sun on the snow shining in my windows, you know I’ve got another migraine. Why is anyone’s guess. If I could figure out what causes them, I would to my best to avoid whatever-it-is. Unfortunately, my migraines are not that predictable. Phooey.

Meanwhile, the housework is not getting done. (Let’s hear a collective groan in sympathy!) And I’ve turned up the heat in the house to a whopping 18 C. Usually it’s a degree lower but the drafts around here are making it feel much colder, even with my long-johns on. The weather continues cold and although we only have a few inches of snow, it’s much more icy than we’re used to around here. There was a flock of happy robins enjoying my pyracantha berries. This one is taking a break on the wicker arbour: 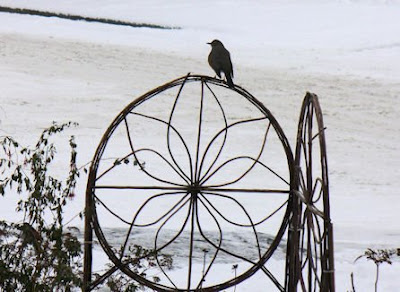 I’m thinking bird silhouettes might be an interesting shape to play with. As a break from the leaves and trees. Speaking of birds, the seed and suet feeders have been well patronized by our little feathered buddies trying to keep up their strength. I saw a frozen dead crow in the snow yesterday, poor thing. I wish I could keep a water source available for them too but it freezes up too fast. Apparently this frigid weather is continuing for the next while and we could be in for more snow on Sunday when we’ll be heading off to Surrey for our Solstice family dinner. A little more adventurous than needs be.

Speaking of adventures, those of us who managed to make it to the Guild meeting last night had a fun time. There were less than 20 people when we usually get more like 50 or more. The gift exchange was rather more sedate than last year. The gifts were numbered randomly and we each chose a number from a basket and then went up in order to get and unwrap our treasure. I was near the end of the line and got the number for my own gift so the next in line, my friend and current guild prez Sandra, quickly exchanged with me. She really wanted my fingerless mitts and had seen me knitting the second one at our Spectrum meeting. She even tried the completed one on then thinking I would make them too small for “ordinary” sized hands. Heh! She left the meeting later waving her mittened hands around happily. Nice to see them go to someone who appreciates them!

In return I got a teeny little sweater made by Janice on her knitting machine: 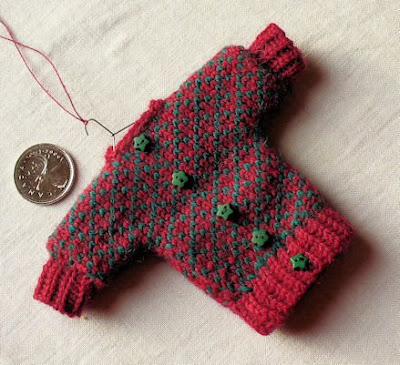 That’s a Canadian quarter for size. It’s complete with tiny little buttons and a hanger! Cute. Her sister Ruth said that things were complicated some by the fact that Janice had forgotten to sew the buttons on before she finished sewing up the seams which made them a little tricky to apply after the fact. (Nothing like your sister telling tales on you, eh?) I’m glad she persevered because itty-bitty buttons bring me right back to my childhood and making clothes for my dolls.

Other notable gifts at the party were a “ferny” knitted scarf, a mouse doll with knitted outfit right down to the fingerless mitts and leg warmers, several items of felted jewelry, a couple of woven purses, felted slippers, beaded and stitched decorations and more that I can’t recall right now. The eats were yummy too. Totally worth braving the slippery streets for. Too bad for those who missed it.