Like a lot of people, I feel that the space between Christmas and New Year’s is kind of a Dead Zone. Holding Pattern. Deep Breath. T-Man often takes this week off but this year he took last week off instead. Since he got back to work on Monday though, his job has been busy. Lots of printing businesses using the Between Time to upgrade, install, reboot, find all the problems – and then call T’s office when things go horribly awry. As anything to do with computer systems always does. Mr. Fixit-T to the rescue! What can I say? He has a gift.

So meanwhile, after Monday’s onslaught of the grand-beasties, it’s been quiet around here. I finished this:

For: Blodgie, my hot water bottle 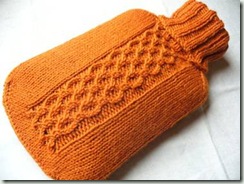 Mods & Comments: I made the cosy slightly smaller to fit my small-sized hottie. It’s green and with its orange sweater, it looks very pumpkin-like. But you can’t see the green part at all from this angle unfortunately.

Cast on 44 sts on dpns. Made one extra round of inc to 64 sts. Changed to 16” circular. Cable panel of 14 sts has 9 plain sts each side, leaving 32 sts plain for back. Knit 7 repeats of the cable patt. 4 rows before end of last repeat, changed back to dpns and begin decs. Worked 5 rounds of dec (last rnd maintaining purls in cable patt) to get back to 44 sts at the “shoulder”. Switched to 2/2 rib until I had just enough yarn left to bind off. The “Turtleneck” is about 7.5” long. Stitched up the opening on the bottom.

I would have begun with a toe-up sock beginning (Judy’s Magic Cast-On perhaps), but I was too lazy to look up the instructions. I ended up with less than a metre of yarn (donated by my friend laurendw) left when I was done. I had to fold Blodgie in half to get it in its new sweater but it fits perfectly!

Warm. I will be warm. However, the temp outside has risen and it’s raining. Bleh.

Currently I’m knitting socks for The Ninja but I only have ribbing to show so far. Makes for a rather boring photo so I’ll spare you. Plus I’m thinking I need to break down and do the (dare I say it?) Math – so I can finish up the long-languishing Green Star Cardi. I started the darn thing back in July! It’s about halfway finished but the neck and armhole shaping needs some major re-jigging if it’s going to fit me the way I want it to. Which of course is why it’s been sitting around being Studiously Ignored. I’m allergic to Math. I can do it, but only with a calculator. And I don’t enjoy it. I’d rather clean the fridge and iron seven shirts and wash the kitchen floor and, oh, say, prepare a one-hour lecture.