A Day At Reifel

What a lovely weekend! The weather wasn’t totally cooperative, but that’s normal. On Saturday, T-Man and I went for our usual walk. Then we got serious and did some gardening for the rest of the afternoon. The weather was perfect, a little overcast and very warm for this time of year. He put up my pea nets and I got the peas planted before it started to rain. This is early for once! I also started transplanting my little seedlings into bigger pots. Of course I only got a few done with lots more to go. It’s a time-consuming and fiddly job, but one I usually enjoy once I get going on it. I’ll attempt to do a few more each day. I also planted the tomatoes, basil, more marigolds and a few other things under the lights now that I have a little more room. I’ll be schlepping flats in and out of the greenhouse twice a day now for the next couple of weeks until things harden off. Nice to have the large protected area to put them though. Much bigger than my little cold-frame.

Yesterday, T and I plus The Ninja and the grandbeasties went to Reifel Bird Sanctuary. It’s a lovely place, even this early in spring. 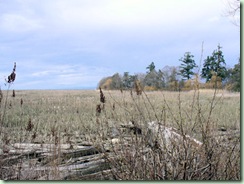 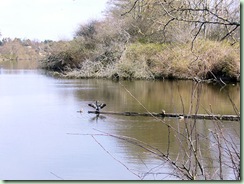 There’s huge carp in that pond too but I couldn’t get a good photo of them. We enticed them up to the surface with bird seed but the ducks got there first. There were lots and lots of ducks and they were hungry: 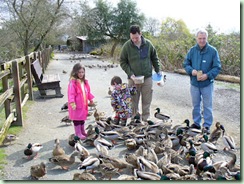 So were the chickadees: 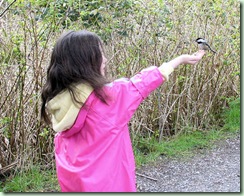 We brought peanuts and sunflower seeds for them. Princess Pink was very patient holding out her hand but Stargazer had more fun throwing seeds at all the birds. While his dad was feeding the pigeons on his hand two-at-a-time, he was a little wary so we put seeds down for them instead: 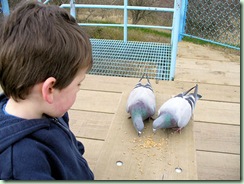 We climbed the lookout tower, peeked out several of the blinds and used up all the bird seed we brought. Just as we were getting tired and heading back, it started to rain. Perfect timing.

The beasties’ mom, The White Lady, wasn’t able to come with us because she broke her foot last week in a tumble down stairs and is on crutches for the next while. We found her back at our house sitting on the deck with a book trying to keep her cast out of the rain. Her girlfriend had dropped her there after they’d visited and we took longer to get home than she’d expected. She was just fine, though slightly damp!

On to crafty things. I finally finished and blocked T-Man’s Hedgerow Socks. There were some differences between the pattern and my results! More because I thought I knew what I was doing and didn’t read the instructions very carefully than anything else. The pattern is just fine. T likes them ok anyhow, but I need to get him to put them on for a photo shoot before I can write them up and call them a Finished Object.

On the baby sweater thing, I’ve decided to wait until Friday when I go to Fibres West to see if I can find something more suitable there. I’m not happy with the red yarn and I can’t find anything else that I like in the stash. Unfortunately that only leaves me a week to knit the thing which is cutting it kind of fine. But it’s small, right? But then of course there needs to be socks too. And maybe a hat…

I’m well down on the body of the Tweedi Cardi now, though it feels like it’s slow going. It’s not very portable due to the huge cone of yarn and it’s also not particularly suited to doing anything else at the same time. I need to watch carefully where my hook is going so it needs good light and more concentration. Somehow I can’t feel the stitches in crochet the same way that I can when I’m knitting. I’ve filled up my Palm T/X card with podcasts so at least I can listen while I work. I’m way-way-way behind on listening anyhow. It’s a good excuse to try to catch up.

I learned how to put some of the most recent Flickr photos of my projects in my sidebar. Still redecorating the blog! This is quite cool.