Before I get to the dye stuff I need to back up to Friday. I had promised to go down to Crafthouse on Granville Island and spin in my guild’s current gallery show. An elderly Louet S15 spinning wheel had been left there for demos but it took quite a lot of oiling to get it to work satisfactorily! 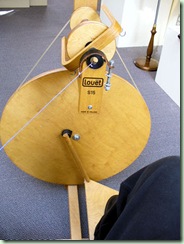 Man, it was noisy! Poor old thing had definitely been neglected! I finally got it going and T-Man went for a walk while I spun a little bit of pink and blue wool/silk. I have no idea what that little ball of yarn will be used for but that wasn’t really the point anyhow. After T came back we decided to go have dinner while we were on the island. We looked at several menus outside restaurants and also stopped in at Maiwa to get more Orvus for washing my woolies. (I use it exclusively for my handknits, particularly the many pairs of socks.) I also found a copy of the new natural dye book from Interweave. More about it later when I’ve digested it.

Dinner ended up at The Keg and it was very nice indeed. More pricey than we are wont to pay whilst eating out, but it’s lovely to splurge on ourselves every once in awhile! He had steak and crab and I had Creole chicken with scallops and prawns. Plus a bottle of gewurtztraminer. Num! Then we waddled home. The weather was quite warm that evening but a little sprinkly on the way up the hill. I took some photos along the seawall: 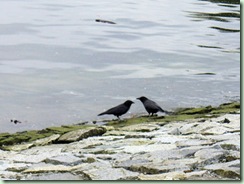 These crows were deep in conversation about some yummy bit of flotsam.

On Saturday we took my poor old Pfaff-y (the 32-year-old sewing machine) into the shop to get checked out. The tensions have been a we bit wacky lately and she hasn’t been seen by a repair person for about 20 years. I figured it was time, don’t you? I felt bad for her though. Like leaving your child for a sleepover. She hasn’t left her spot in my studio for a very long time. Now I keep thinking of things I want to sew even though I haven’t done any sewing for quite awhile. It’s only because she’ll be gone for a week. Otherwise it would probably never even cross my mind.

I also finished up the dyeing that’s been going on veerrrryy sllllooowwwwllly all last week. 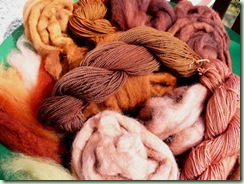 Procedure and comments: After picking a half-dozen rhubarb stems for sauce, I saved the leaves and decided to try Jenny Dean’s rhubarb leaf mordanting technique. I chopped and tore the leaves into pieces and put them in a dyepot with water to cover, brought them up to a bare simmer and left them for an hour or so. Then I turned off the heat and allowed them to sit for about two days before getting back to them. I used the sieve to remove the green goo and put in 2 skeins of washed and soaked superwash wool plus about 200g of the roving (dry, not soaked). This was brought to a simmer for at least an hour. It actually got to a boil at one point where after I turned off the heat and left the pot overnight. This came out a soft grayed yellow. Not an especially attractive colour on its own really. (Lower right bit of wool in the above photo.) 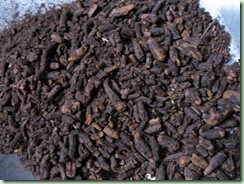 I had a little baggie of thin madder roots from one of my earlier harvests. It hadn’t been washed as much as I’ve now learned to do so it still had lots of yellow and brown in it. I used the craft blender to grind it up as much as possible. This gave dust, powder and ¼” chunks. I put it in the small pot with water to cover and heated to a bare simmer for at least an hour. Then I turned it off and left it overnight. The next day I poured that through the sieve into the clean dyepot (after dumping the rhubarb mordant) with more water to make the dyebath. I added more water to the roots and extracted again. This also was added to the dyepot. I entered the rinsed rhubarb-mordanted wool (1 skein of cream superwash and 3 out of the 5 pieces of roving) and brought it up to a bare simmer for an hour or so and then turned it off overnight. I also put more water on the madder and heated it before turning it off to rest with the big pot.

The next day I put most of the now rust-coloured wool roving (except for one piece) in a small pot with a tablespoon or so of ammonia. It immediately turned deep brownish rose! Really pretty colour and slightly variegated. (Upper right of top photo.) I left the superwash out to keep the pretty deep rust shade. (Centre top.) The roving that was left untreated with ammonia is a lighter red-brown. (Upper left.)

There was lots of colour still left in the pot so I threw in the rest of the mordanted wool. Then I extracted some more of the colour from the madder and added that. While I was extracting that third time, I put a little piece of unmordanted wool in the pot with the madder root and got a brilliant red colour. Unfortunately there was a lot of madder bits caught in it! I also added a piece of it to the ammonia pot and got a more bluish-red. I need to remember to make a “tea-bag” for the madder root because the colour is so much deeper if you use it in the pot at the same time as the fibre. But if it’s not contained it’s practically impossible to get out the bits later. Plus the fibre sheds the bits while you spin or knit with it. Messy!

The second batch of rhubarb-mordanted wool ended up quite different shades from the first one. The superwash wool was more brown but the roving was more rust and less brown! Go figure. (Centre of upper photo.) I left the roving as is and put part of the skein of superwash in the ammonia modifier to make a variegated purple/rust/brown skein. (Centre on top of the pile.) Pretty! I’m very happy that I was able to make a naturally-dyed variegation without much trouble.

I extracted the madder yet one more time (number 4) because there was still lots of colour coming out and tested another little bit of unmordanted wool in the extraction pot. It was still a bright deep red but a different red from the last batch. I strained out the madder from this 4th extraction and added the unmordanted white skein of superwash. To the exhaust pot I put in a further 100g of wool roving (also not mordanted). This time I got a strong peach colour on the roving (centre front in photo) and a somewhat deeper red-orange on the superwash. I think there was some of the rhubarb mordant still in the exhaust pot which had now been reused 3 times. That might account for the slightly muted colours from it as opposed to the 4th extraction pot which was uncontaminated. Most of the peachy roving went into the ammonia modifier for a pretty lavender. (Just behind the peachy one.) The superwash from the last extraction also was put in the ammonia and ended up a soft rose. (Skein on the right.) It took quite a lot of rinsing to get it to come clear though. Maybe a more fugitive colour than I’d like since there is no mordant at all in this one. I’ll just have to keep it as carefully as possible out of the light and wash gently. I plan to make stranded knit gloves in a Scandinavian/Estonian style. The roving will go into some eventual sweater project.

I’m very pleased with the colours and love the combination of rhubarb leaf mordant and madder especially with the ammonia modifier. It’s very much in my personal palette and goes well with the woad blues. There is definitely a case for trying a very strong bath for deep reds instead of diluting with too much fibre. Next time. I will need to dump out the madder roots and divide them this fall anyway.

So now T-Man has made me a whole new dye garden at the side of the house where he’s been drastically pruning back the oversized laurel. It’s actually on city property but since they haven’t seen fit to put a sidewalk in on that side, it’s just a big chunk of grass that T has to mow anyhow. Many of our neighbours have been making use of similar city land and planting flowers and shrubs and even raised beds for vegetables, so I feel totally justified. We’re leaving a wide grass pathway for foot traffic. I’m going to plant my woad and coreopsis there, plus put my madder pots out. And hopefully eventually I’ll have some weld and Chinese woad to put in as well. I’ve ordered the seeds from Richters Herbs in Ontario. I was reluctant because they charge a $6 flat fee for postage and handling and that was more than the seeds were worth. So I added a packet of lemon creeping thyme to the order so it would at least be slightly more than that! (I’m trying to find a thyme that will survive in my pathways. So far the winters have managed to kill quite a few plants.) I’m a little late starting these seeds but that’s ok. Weld won’t be much until next year anyhow and hopefully the Chinese woad will be of harvesting size by August. Too fun. Photos coming when there’s something to show. Off to play in the dirt.

Meanwhile here’s the sunset from Friday as we were walking home along the False Creek South seawall looking towards Granville Island on the left and the Granville Bridge: 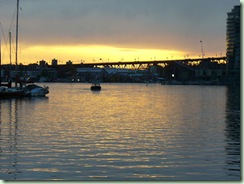