Not The February Baby Sweater

It’s April already! Time is slipping away on me again. I swear if it wasn’t for the seasons changing – and somebody shoving a calendar in my face – I’d never notice time passing at all. One day follows another, etc. Today is Good Friday, for some folks at least. For me it’s an extra day to spend with T-Man, who managed finally to get a holiday off. We lazed around all morning in bed: I made tea and coffee and he made breakfast (bacon & eggs, yum!). The weather is crap so there’s an excuse for this kind of self-indulgent behaviour. That’s my excuse and I’m stickin’ to it anyhow.

So here’s the FO: 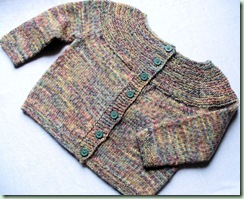 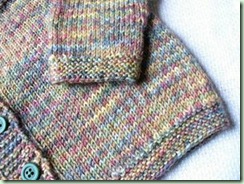 Mods: I worked garter stitch to the last increase row. I also added 7 extra rows to the yoke thinking that the garter stitch section pulled in too much and it was going to come out short. I worked the garter bands at the same time as the main body rather than knit them lengthwise and sew them on later as the pattern suggested. (Not my favourite method.) I reduced the width somewhat at the cuffs and hem as well as reducing the needle size because the garter stitch band tended to flare.

Comments: This was knitted in a hurry thanks to sis’s impatience to give her daughter-in-law a baby shower! I think it turned out really cute if a little big. Since this is a summer baby it won’t be needed until fall anyway and the little one should have grown into it by then. I tried to style and colour it for a neutral sex since I’m not sure what’s on the way yet. It turned out almost exactly the size in the schematics. Success! I love Knitware more all the time.

It occurred to me that this sweater resembles EZ’s popular February Baby Sweater (Rav link), minus the lace stitch. I don’t know if that’s because I unconsciously copied it or just saw something similar somewhere. There are lots of these out there anyway and it’s such a practical style. I was totally happy with the way I was able to generate a useful pattern so easily with the Knitware program. I do have a few automatic changes that I make – mostly because of the way I work as opposed to the software’s methods. For instance, I pick up the stitches under the arm for the sleeve rather than casting them on and then having to sew the seam up later. The same with the front bands that I knit at the same time as the body, this time in garter stitch. The buttonholes were a little wacky-spaced due to my inability to count rows (!) but not really noticeable I think. (The top 3 appear to be closer together but that’s because of the garter yoke. They are actually correct!) All the finishing necessary is simply sewing in the yarn ends, adding buttons then washing and blocking. Done!

Currently, I’m finished the crocheted Tweedi Cardi’s body and am now going straight into the edging. Then I’ll do the sleeves. I even found a fun button, one I’ve had in my collection since I was a teenager. Just to have something a little more portable than the Tweedi’s massive yarn cone, I’ve also re-started the Green Star Cardi from a new pattern generated by Knitware. Hopefully this time it will work out better and…um…fit properly? I went down a couple of needle sizes since I wasn’t happy with the loose fabric I was getting and the software recalculated everything for the new gauge. Sock yarn is kind of tricky sometimes. It has a tendency to stretch and relax and then pull in again so it’s hard to gauge. The shoulders should fit my narrow ones much better now anyway. The program does have a limitation on the neckline where it won’t allow the bottom of the V-neck to be lower than the armholes. I can move it down the two inches I need myself without much trouble. If I need to recalculate the rate of decreasing there’s the built-in calculator to make that easy. No math for me! Worth the price of admission, I must say.

So far I’ve been quite pleased with how the projects have turned out with Knitware Sweaters. I haven’t even plugged in my personal measurements yet and have just tweaked the closest standard size. (Which you can do with the free demo, btw.) It doesn’t substitute for some basic knowledge of knitting and crochet or a sense of the design you’re aiming for. But it sure saves a lot of trouble trying to figure out how to make something that fits properly using your own yarn, stitch pattern, needles and gauge. Not somebody else’s. It might not be helpful for a garment that is really oddly shaped or constructed (think Norah Gaughan), but it gives you a place to start designing your own sweaters anyhow. I’ve spent some time actually reading the extensive manual (available here, along with all the demos) to get a sense of what it will and will not do. It’s really pretty powerful.

We’re off this evening to T’s darling baby brother’s for fondue. Yum! Definitely a good Friday. Don’t know about tomorrow though. It’s my birth mom’s memorial so will be a big day with the extended family. I finally wrote my “few words” that my sister The Nurse insisted on. It only took an hour once I broke down and just did it. I just can’t talk off the top of my head, especially in an emotional circumstance. At least I can read.

Great job on the baby cardi. Love the colour(s).

I've never tried Knitware but the free demo sounds tempting - it would be a lot better than my limited counting abilities!