What Have I Gots In My Pocketses? 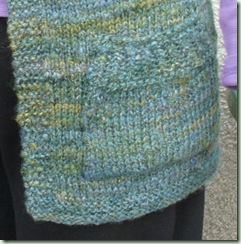 No, it’s not The One Ring. But at least I have pocketses now! I decided that my Green Peace (Shalom) Cardi needed them badly. Even though it probably wasn’t as flattering a look on me with the extra bulk around the hip section. Practicality won out though. And luckily I had some of the vintage handspun yarn left so I started with a mini-version of the yoke’s twisted rib and garter stitch pattern, then increased a bit after that and straight on to the bind-off. After slip-stitching them on to my sweater I’m very happy. Now I have a place for my hands when it’s cold or a hankie or even a ball of yarn. Good to go. So now what? I’m just about up to the armholes on my Shamrock Cardi where I have to divide for the fronts and back sections. It’s getting unwieldy for portable knitting, plus I have to count a lot for decreases, so perhaps it’s time to start my next project. I seem to be tired of knitting socks so this will be the leggings I mentioned earlier that I had promised myself this past winter. Yes, I know it’s now spring and getting warmer all the time. That doesn’t matter. They’ll be ready for next winter when my legs are freezing in my cold house. Better to have them tucked away in the drawer as leggings than merely a couple of balls of yarn – which are kind of hard to wrap around one’s nether regions in a convenient way. Heh. My biggest problem is that I don’t really have quite enough yarn. If I run out I may have to use something non-matching for the upper panty part. We’ll see how it goes. Since it won’t actually show under all the clothing layers I tend to wear in winter, it isn’t really a big concern.

This brings me to something I was pondering about. What do folks really like to knit in warmer weather? I have difficulty understanding the need for sleeveless shells and the like that are in all the magazines’ spring/summer issues. When it’s warm enough for sleeveless garments it’s much too hot for that thick layer of knitted or crocheted fabric! No matter the fibre content. Or is that just me? Or perhaps the west coast maritime climate that I live in? I did knit myself a nice little mossy green-gold shell awhile back but I only manage to wear it approximately once a year in that two-second interval between too chilly and very warm that happens sometime in spring. And even then I either need something with sleeves over top for my cold arms or else I’m totally broiling.

Anyway, I don’t mind knitting winter garments in summer. Season doesn’t really matter to me. Occasionally it’s too hot to manage a big heavy sweater in your lap but smaller or lighter items such as gloves, fingerless mitts, scarves, shawls, hats etc. are ok. But then that’s the same stuff I work on all year around! Though I’m busier outdoors in the garden from now until October, which means a few hours less spare time, it doesn’t seem to make a difference in the output. Plus there’s more natural light to work by. Much more pleasant when you can actually see what you’re doing, doncha think? These aging eyes appreciate it anyhow.