Not too warm yet, but much better than it was. It’s so funny that nobody can figure out what to wear! You see folks in shorts and flip-flops and other folks in coats – on the same street. Personally, I like it when it’s cooler but then I’m not exactly a hothouse flower.

We spent most of the weekend in the garden, weeding and planting. Also T-Man and I took a rather harrowing trip in the VW van out to Ikea and the plant store on Saturday. I say “harrowing” because old Fraulein Blau was acting up and kept nearly stalling out. She needs to go see ‘Doctor’ Hans and get checked out because there is something definitely wrong with her. We need her functional so we can go on the annual fambly camping trip to Manning Park in June. Even though it was white-knuckled, we drove the van because there’s only just so much one can get into a MINI-Cooper besides oneself.

The plant store was ridiculously crowded with everyone buying things for Mother’s Day. We picked up a lovely dark-leafed ninebark for the space where my coreopsis was last year. (Now it’s in the new dye garden so there was a large gap in the bed.) We also found a new pieris with burgundy-coloured new leaves, unlike our old ones with pink-to-reddish spring colour. Wonder what colour the flowers are? Probably purple or deep pink. And lastly a lovely yellow-orange azalea to put in the gap near the dye garden, behind the butterfly bushes. You can’t see it from the house unfortunately but it’s right out in the open for the enjoyment of passersby.

Here’s the east garden now that everything is planted: 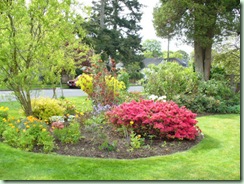 It’s going to look quite spectacular when everything comes into bloom. And here’s the east garden under the hazelnut monster…er, tree: 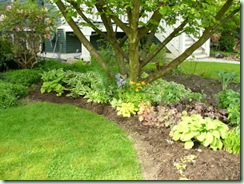 It has a lot of heucheras and hostas because I love the different leaf colours. We have a little bit more to complete (further to the right out of the photo) and then we’re done. At least until the rhododendrons need pruning after the flowers finish. Yes, it’s a lot of work. But it’s not as bad as it seems – and it’s fun! Some people go to the gym and some people shovel compost and dig weeds. At least we have something to show for our efforts.

Anyway, I’m somewhat annoyed with the seeds I got from Richters. I had very poor germination and it’s not like I’m not experienced at growing things from seed. Been doing it for decades. To wit: the other seeds (mostly from West Coast Seeds) that I planted on the same day look like this:

Notice the two pathetic little Chinese woad plants (out of a dozen), the teensy little welds peeking out on the right with the creeping lemon thyme behind them. Sad. I planted some more Chinese woad two or three at a time in each spot and we’ll see if they do any better. It’s getting mighty late for them to get to harvesting size before fall though so they’d better hurry up!

You might remember that I mentioned Ikea back there somewhere but since we aren’t done with that project, I’ll keep it under my sunhat for the moment.

I've been really happy with my West Coast Seeds so far this year. I think they've been running about 90% germination rate so far.

Beentsy, you and the Mr are champion gardeners too! Hope your new raised beds are productive this year. Yes, West Coast seeds are really the best and they are optimised for our climate. It's a good local company too and I feel right about supporting them.

Your garden looks awesome. I am struggling to keep up with my own so it's inspiring to see the successes of others.

And yes, Richter's has disappointed me with their seeds in the past. I have had much better luck with their live plants.